A NATO RQ-4D Phoenix uncrewed surveillance aircraft took off towards the Black Sea and returned 24-hours later to its base in Italy.

NATO say here that this important step to Full Operating Capability for the NATO Allied Ground Surveillance Force has been ‘successfully achieved’. The force have five RQ-4D aircraft.

“With this 24-hour mission, we have proven that we are on the right track to Full Operational Capability and are a valuable asset to NATO. I am very proud of the teamwork accomplished.”

According to a statement from NATO:

“The challenge of this long mission focused on the airmen and soldiers operating the system; in particular their ability to hand over smoothly between shifts. The sensor operators, who are responsible for controlling the Synthetic Aperture radar, were also changed at the same time as the pilots.

In order for the unmanned aircraft to fly its mission safely, it is not only necessary to have well-trained pilots who are replaced after a certain period of time, but also the IT specialists who ensure that the satellite and communication link is guaranteed between the Main Operation Base in Sigonella and the NATO RQ-4D Phoenix.”

At present, the multinational NATO AGS Force comprised of approximately 375 personnel from 24 nations.

The second picture illustrates just how big these aircraft are!

Holy cow Batman! Didn’t realise they were so big!

I’ve jumped out of much smaller planes!﻿😎﻿

The RQ-4B/D and maritime focused MQ-4C are impressive aircraft.

With an operational altitude of 60,000ft and endurance of 30+ hours it certainly allows them to travel long distances and stay on station for a long time too.

Looking forward to seeing RAAF MQ-4C operating here in Oz in the not too distant future.

Send one over the ditch and visit us in NZ John!

I’d be interested to see how the operational doctrine develops for joint P8 and MQ4 ops n the RAAF. No doubt the RAF will be keen observers to consider acquiring MQ4. 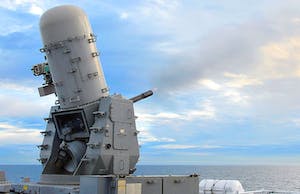 November 19, 2021
The Ministry of Defence intends to award a contract of up to five years to Devonport Royal Dockyard Limited for "Contracting for Availability services for the Phalanx – CIWS" from February 2023.