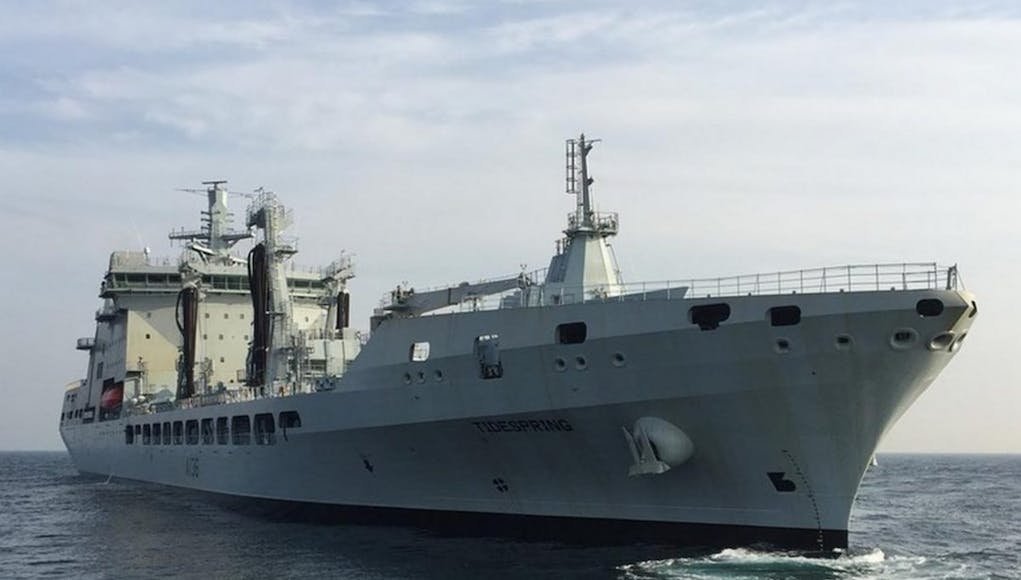 RFA Tidespring, a Tide class tanker, is now seven months late and has still not been accepted by the Ministry of Defence.

It remains unclear if the delays are due to technical or manning problems, the MoD have not responded to requests for comments on this.

“We remain confident of delivering the MARS Tanker project within the original approved budget and expect all four tankers to be in service by 2018 as planned. As with all major projects, timelines are regularly reviewed and the nature of this contract means the MoD is protected from any unplanned cost increases.”

Basically were still not ready for her in the UK

Well at least it shows the S.Korean yards aren’t superhuman. Maybe Cammell Laird should get the next three.

The delay is on our end, not the yards. The MoD isn’t accepting them, we believe, due to manpower issues.

Sounds very odd to me. How can UK manpower shortages be allowed to penalise Daewoo if it has completed the ship and it’s passed its sea trials? Most contracts would have a significant stage payment triggered by official acceptance by MoD and we’re witholding this because of problems on our end? Either there’s more going on here or someone at Daewoo really screwed up when negotiating the original contract with the MoD.

It won’t be penalising DSME, you can be pretty sure about that. If they haven’t been accepted for an owner reason, MoD are forking out for their continued presence in the yard. DSME have done their job and are getting on with the other 100 ships they build every year…

Manpower shortage? No surprise there. I heard rumours of ‘first of class’ issues but can see that being an excuse.

Can we not just accept them and put them in port

Tosh – what made you say that?

I’ve seen the projected top speed given as in excess of 25kn. I followed her sea trials on marinetraffic and she never appeared to do more than 18kn. There may have been limitations due to other shipping in the area but it’s possible that an inability to reach her designed speed may be an issue. It may be revealing that a MOD source quoted by Defense News said ‘ the vessel had performed well on sea trials, particularly on handling and maneuverability tests’, omitting any mention of speed.

You would hope it is not a man power issue.

No doubt delays in taking ownership will be costing the tax payer, if the problem is at our end.

Surely they could find a crew to get the ship to the UK and then park it whilst we solve the manpower issue.

Maybe, just maybe they should have been built in a British yard, using British steel and employing Brits in the first place…just saying…

Hi Dave, no British yard bid for the vessels as all were busy with other more valuable work.

The building of these ships overseas kept them within budget and they were completed far ahead of schedule, the issue here is with the British side of the deal, the MoD currently can’t accept them as they can’t man them.

This is, even with hindsight, a much better choice.

Didn’t know there were no UK bids. Thanks for pointing that out.

I see Norway’s option has 48 bed hospital included. Do any of ours have that capacity? Personally, I still think we should hive off enough money from the £11 billion aid money to build a couple of decent hospital ships

Will Lockyear
Reply to  Dave Stone

RFA Argus has a hospital with 70 beds in the general ward and about 30 other beds in other areas such as a high dependency unit, so effectively has a 100 bed hospital on board, although it’s not a hospital ship because it has self defence weapons so is classed as a primary casualty receiving ship

And put NHS RN reserves on as disaster relief? Where is the mission and how can we crew and run them without putting IAD money into the MoD budget? IAD has to be spent as that.

While always disappointing – these are first of type acceptance trials of a UK design of course albeit built cost effectively in Korea. I suspect the delay is made up of a few separate issues of which contract spec deficiencies are but part. The lessons learned will no doubt inform the subsequent 3 builds under contract. Let no one think HMS QE will be without similar first of build delay issues (unless we are very lucky) when she puts to sea soon.

i hope the MOD put a penalty clause in the contract

The fault is on the MoD’s end.

Which makes me wonder whether Daewoo have any penalty clauses against MoD. They should at least be able to force MoD to make any final payment and issue contractual acceptance which might well be necessary for Daewoo to actually book the revenue. I assume that MoD are at least paying berthing fees if the ship really is ready to go. There are lots of complaints about suppliers ripping of customers (e.g. inflated BAE prices to RN) but it goes both ways, a customer should treat the supplier fairly as well.

You bet they have penalty clauses built in. The Korean yards are past-masters at contractual stuff, and there isn’t a single chink in their armour. If even a small item seems to be missing, they will whip out the Build Spec and show you that it’s not in it. They will still do it for you, but it will be a VOR (Variation Order) which will cost you $20k just to give it a serial number… MoD are babies at this sort of thing (spoiled by our UK yards kowtowing to them), and the Koreans will ride roughshod over them… Read more »

It’s a shame that the RFA can’t keep hold of their Engineer Officer Cadets once they have trained them to man these vessels.

I fully understand the delay..
This is probably affected by ageing senior officers aboard RFA ships and not enough experienced younger officers coming through to replace them.. not to mention crew being lured away by higher pay in the private sector after their contracts end.. After all the in service benefits are higher in the private sector..

Just a bit of advice, try to investigate the design and manufacturing issues. Ask why some main compartments can not be shut down and hermetically sealed for firefighting. Maybe look into the reasons why it has failed sea trials. It’s not manpower!

As this doesn’t meet the desired narrative that British shipbuilders are lazy and produce shoddy, late work, I doubt this comment will make it past regulators!