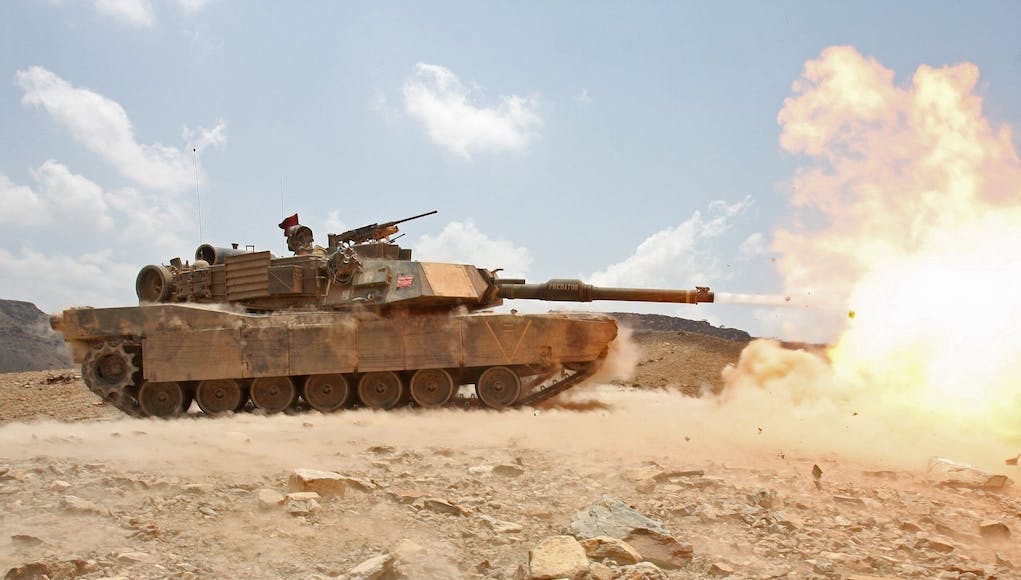 “The Northrop Grumman SKCM system, known as the Multifunction Electro-Optical System (MEOS), successfully countered the ATGM and defeated it in real-time.

The MEOS identified and countered all types of threats fired at its APS system, making this the fourth consecutive time the system has performed well in field tests to defeat threats.”

“We look forward to working with the Army to deploy an affordable end-to-end Vehicle APS system that can defeat a variety of anti-tank guided munitions.”

Back in 2017, we reported that Leonardo was selected by the UK Government to lead a team of UK companies for project Icarus.

Under a Technology Demonstrator Programme (TDP) called ‘Icarus’, the team will develop and demonstrate a way to affordably integrate technologies in the Active Protection System category, preparing them for deployment across the Army’s fleet of land vehicles.

“The project is responding to an operational environment where armour by itself will not be sufficient to defend against the capabilities of future weapon systems, in particular threats such as Rocket Propelled Grenades (RPGs) and Anti-Tank Guided Weapons (ATGW).

In order to counter this growing threat, a number of Active Protection Systems (APS) technologies have been developed by industry and are available as off-the-shelf solutions to supplement the physical protection that is offered by an armoured vehicle.”

These APS technologies generally fall into either of two categories: ‘soft’ APS solutions that are focused on early threat detection and which attempt to disrupt, decoy or spoof the incoming threat and ‘hard’ APS systems that seek to defeat the incoming weapon system by physically intercepting it, known in military terminology as a ‘kinetic effect’.

Whilst these APS technologies are currently available and will continue to be developed by industry, it is clear that no single solution is suited to every threat scenario or indeed all threats.

The US has purchased The Israeli Trophy system for its MI tanks
The Dutch have purchase purchased Iron fist for their APCs
Germany has just purchased Trophy for its Leopards
Turkey has fitted the Ukrainian APS ‘Akkor Pulat’ Active Protection Systems to its tanks inside Syria.
The Syrians have fitted their armour with a soft kill APS system

Meanwhile in the UK, the MOD is still trying to work out if APS is viable.

The US has purchased The Israeli Trophy system for its MI tanks
The Dutch have purchase purchased Iron fist for their APCs
Germany has just purchased Trophy for its Leopards
Turkey has fitted the Ukrainian APS ‘Akkor Pulat’ Active Protection Systems to its tanks inside Syria.
The Syrians have fitted their armour with a soft kill APS system

Meanwhile in the UK, the MOD is still trying to work out if APS is viable.

Trophy was purchased for the currently in build batch of M1A2C (formerly SEPv3). While this program is a competition for the next batch slated for 2020 the M1A2D (formerly SEPv4).

But in an article which has a headline of :
Northrop Grumman showcases active protection system for the US Army

The article kept referring to soft kill, is this the same as active protection? As I thought it would be passive.
It will be interesting to understand if a vehicle needs to select one option over the other, either use hard kill method over soft kill and which is more reliable. I can’t see the merits in both.

The article is referring to a soft kill system, which “confuses” guided anti tank missiles using various methods. The M1A2 already has a soft kills system in place, so i’m assuming this is an upgrade.

The US is still developing their hard kill system. In the interim they are purchasing the Israeli system. The US system will be much safer for dismounted troops, but its more complicated so taking a long while to enter service.

Soft kill systems can be anything from smoke obscurents to laser dazzlers. However, these systems only work on certain types of ATGM which the article forgets to mention. It s relatively easy to defeat ATGMs that use MCLOS or SACLOS as their guidance because they require an operator to guide the ATGM towards the target. Even laser guided ATGMs can be defeated by certain types of smoke or by dazzling the seeker within the ATGM. The real problem is ATGM like Brimestone or even Javelin. Brimestone uses an active radar for target recognition and guidance, so lobbing a chaff cloud… Read more »

Rheinmetall LEP proposals aren’t offering any form of APS (that I’m aware of) but is offering a re-engineered turret and smooth bore gun. Will be as interest selection process, long term the smooth bore could save money which could partially fund an APS upgrade.

Brimstone could in theory also be defeated by creating a ‘smoke’ cloud that works in the high millimetric wavelength that the Brimstone seeker uses. Isn’t actually smoke, that works in the visible wavelength, but there are ‘smokes’ that work in the IR and millimetric wavelengths. All to do with the size of the particulates contained in the obscurant. You could also call it extremely fine chaff. Then you’re into how quickly such a cloud could be formed after incoming missile is detected. If not sufficiently early, Brimstone will continue ‘tracking’ on built in range and crossing gates/rates in its autopilot… Read more »