HMS Magpie, the third smallest commissioned vessel in the Royal Navy, has arrived in Portsmouth to begin a busy summer programme of survey work to ensure the harbour remains safely passable as homeport for the two Queen Elizabeth class carriers.

The task, the second since the vessel commissioned last year, picks up on the legacy of her predecessor HMS Gleaner which spent the latter years of its career scouring every inch of Portsmouth Harbour ahead of the arrival of HMS Queen Elizabeth. The small survey ship has recently completed a similar analysis of the waters around the BAE shipyard at Barrow to ensure the safety of the navy’s newest nuclear submarines. Preparing the harbour for the new 65,000 tonne warships involved dredging and shifting more than three and a half million cubic metres of clay, sand and gravel as part of £100m worth of improvement works. With the second carrier, HMS Prince of Wales, due to arrive later this year the Harbour Board and Royal Navy are not taking any chances in ensuring the stability of the seabed.

The catamaran is well equipped for this with her built-in and towed sonar systems able to collect 800 readings per second to build a 3D image of the seafloor. With the sonar’s alone expected to gather half a terabyte of information it is no surprise that half her crew will not actually be on board during the survey mission. With four manning the vessel, the remaining half a dozen crew will be working from computers at Fort Blockhouse in Gosport to process and analyse the vast quantity of data as its collected.

“One of the biggest challenges is how busy the harbour is,” explained Commanding Officer Lieutenant Commander Will Alexander. “There are around 230,000 movements every year, and it’s especially busy in the summer with pleasure craft. Being in command of Magpie is a hugely rewarding job…what we do has a direct impact on the ships and submarines of the Fleet, surveying waters so that they can use them safely.”

Magpie’s role in support of the combat arm of the fleet was further emphasised prior to this mission when the ship received its battle honours board, donated by shipyard Atlas, and commemorating the service and achievements of her eight namesake predecessors including the Second World War-era frigate famously commanded by the Duke of Edinburgh.

The ship will also support heritage and conservation efforts once work inside the harbour and main approaches is finished. This will include investigating the wreck site of Henry VIII’s flagship Mary Rose to see if there are any significant remnants left as well as a nearby wreck of a French Galley off the coast of the Isle of Wight. 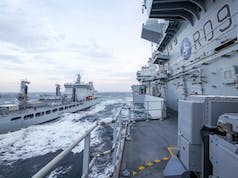 Could it have a Phalanx on the roof!?

Well, it has a massive bolt on sail on its arse end in the cover photo!

Soundbite incoming:
“This shows the steadfast commitment that the Ministry of Defence has towards safeguarding our natural environment…”

Did the idea of using massive kites to generate power ever get anywhere? I realise this would be useless while in any situation where any action may be involved but in theory they could generate quite a bit of useful power and be pretty cheap to maintain.

There’s prototype kite power systems being developed by Kite Power Systems. They’re going to be testing them at West Freugh in SW Scotland

At the very least Daniele, 32 strike length VLS and a pair of 5” guns are called for really ?

At least! I don’t know what the RN is coming too….

She should have Sea Typhoons or somthing(???) instead of the unreliable and utter shambles of the F35 AMERICAN jet, disgraceful what the once proud RN has come too!!!

The mighty Dreadnought HMS Magpie! Pride of the Royal Navy battleline. Who even NEEDS the QEs when this Invincible ship prowls the seas!!??

Sure these never used to have a HMS prefix but HMSL (HM Survey Launch) and never mind a 2 1/2 in Command, I suppose it’s the politicians trying to increase the number of commissioned ships for propaganda purposes.

H.M.S POINTLESs how much of the budget did it sponge away from more worthwhile projects?

Nah I agree with Andy, why bother making sure Royal Navy harbours are safe to navigate, seems pointless to me.

Would have been much better to not have HMS Magpie, and spend that money repairing HMS Queen Elizabeth every time she hit something in Portsmouth harbour.

VLS won’t cut it in the future, even for small craft like HMS Magpie. 16″ naval gun on the bows should cut it I reckon.

Definitely too small, the Americans will have plenty of 16″ guns from the Iowa class. They won’t miss them too much I shouldn’t think.

Those are from two different Ships though. Both were and remain Legends In the RN History. As are the two Anchors guarding the gates of RNAS Yeovilton’s (Fleet Air Arm) Museum. I was lucky enough to see HMS Ark Royal Weighing hers.

It’s another great Memory. Wish I’d been around to see Rodney and Nelson firing a Broadside though.

I remember the Stories that my Grandad told of the Barham.

I’m sure the could pull a couple ot 18inch guns from the seabed. Scrap, clean and paint, jobs a good in.

There are some spare guns outside the Imperial War Museum at Hendon which should fit snugly. A littl ballast at the rear would offset any issues. #technical genius.

Very underrated but staggering in her Capability.

According to one of my Grandad’s

RGR, RN In the Blood mate.
I could write a fair few Books too.

Might do so one day.
Grandad was away for 6 Years Solid. Lot’s of Stories and He was Bloody Lucky too. 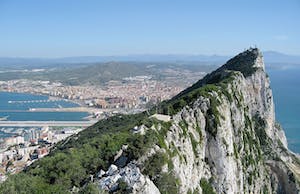