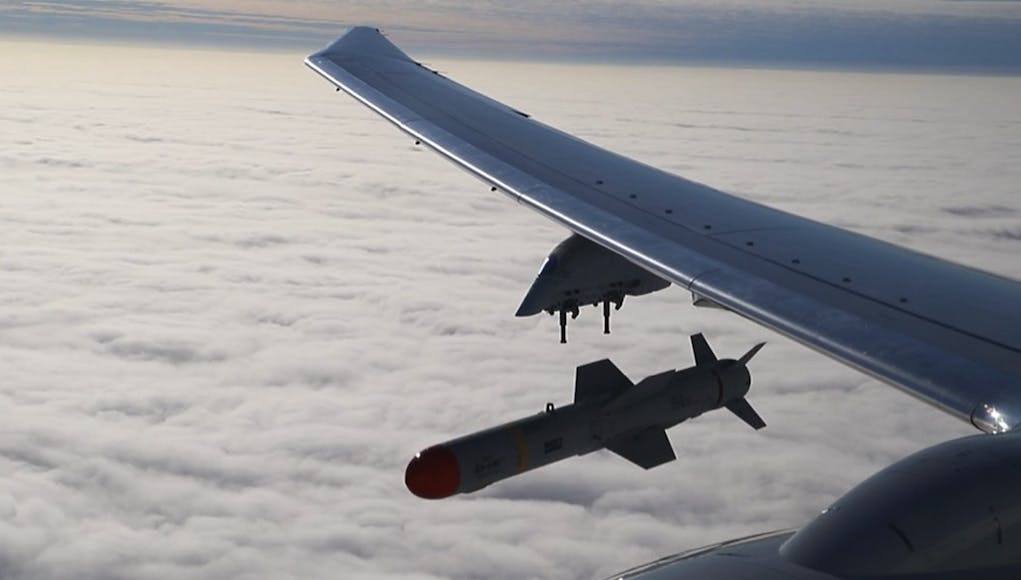 “VP-40 and VP-4 worked as one unit to plan the coordination of flights, mission timeline, and launches. Plans for exercise safety and communications were developed in close cooperation with allies to enable the firing event.

The successful result reaffirmed the global reach of the P-8A and its capability to conduct Surface Warfare engagements when directed to provide offensive or defensive support to a maritime task group.”

“Our performance with partner units and allies in exercises like At-Sea Demonstration/Formidable Shield delivers confidence in an uncertain world and sends a message to friends and potential adversaries alike.

On this inaugural P-8A deployment for VP-40, the Fighting Marlins have already made significant contributions to the international maritime security picture while conducting sustained operations across Sixth Fleet.”

Is the RAF getting this too or just the inferior Mk46 torps?

You’d hope so but let’s face it, we’re not renowned for actually kitting out our expensive toys…

I believe we are buying ‘the package’ ; US spec P-8s wired for missiles and the missiles. Am looking for a source.

UK will have access to Harpoon and Mk.54 torps from US stocks.

Hopefully, this ridiculous position will be sorted in due course and the far superior, recently upgraded Stingray, will be integrated.

I’d love to see JSM integrated to P-8. Norway and Australia are both users of P-8 and have ordered JSM, the Aussies were looking at integrating JSM to P-8 a few years ago, but this appears to have gone quiet recently. If it was….a small buy of 50 missiles would make an awful lot of sense for the UK’s P-8 and F-35B fleets…

Thanks for correction RB.

I am sure Harpoon not hard to destroy with any number of CIWS including Phalanx, never mind why China and Russia has. Even Taiwan is getting these, that tells you how useless it is.

It would be folly to even launch one of these.

where are you souring this opinion?

He does not have to source this opinion just look at what Russia, China, Iran, India are fielding as AShMs most are supersonic, have heavier warheads than harpoon more advanced electronics/guidance much greater range, etc.

Last edited 10 months ago by Bringer of facts
Reply

James
Reply to  Bringer of facts

You seen any of those scary missiles in action? Any real data to back up a wiki entry? Harpoon is dated but built in their thousands and plenty of launch platforms makes it a problem for any enemy.

Bringer of facts
Reply to  James

The same could be said for Harpoon, it has had no combat record against near-peer adversaries, but all the same its specs are obsolete compared to the latest developments in AShM.

Nah man that doesn’t conclusively answer anything. How does pointing out how good other anti surface missiles are ? Quantify whether the Harpoon is easy to counter?.

im not arguing that there aren’t better more modern missiles out there or that it isn’t coming to end of its life all I’m saying is it seems a bit daft to just claim based on from what I can see nothing that it’s lemon squeezey to shoot down.

Honestly without any data on the matter I’m just not buying that claim. 2018 at RIMPAC the block II + performed well .

Iran? you sure about that. All they are good for is sinking there own vessels.

I would not underestimate them :

They are also in the process of designing a 6000-ton (Loghman class ) destroyer to carry these missiles.

Last edited 9 months ago by Bringer of facts
Reply

Unfortunately, the PLA does not publish that information to “prove it”, you have to deduce it by years of experience watching the PLA and making educated guesses.

In this case the argument is that the PLA are putting 11 barrel CIWS on everything, they only do this when they are extremely confident about somethings performance, otherwise they refine and iterate.

They are up against the NSM missile, so one could deduce (along with much more supporting theory and evidence) that Harpoon is not an issue.

This is an extremely simplified explanation for you.

So just your opinion then? Bit of guess work

it’s not just my opinion, but the collective opinion of a community of PLA watchers.

Come take a look at sinodefenseforum.

Aye I will do 👍🏻that’s what I’m looking for information to back up what your saying. I wasn’t trying to argue just want see some hard fact on the matter.

Good luck getting anything more than that. 99% of what gets posted on these boards is guess work even though the posters would have you think they have seen the classified data. Yes it is possible to make some educated guesses but often times posters don’t even bother to look up widely available info and yet still claim that this weapon is superior to some other weapon on nothing more than wishful thinking. For what its worth, the lrasm is also subsonic and the USN is ordering them by the hundreds so being subsonic does not make a weapon of… Read more »

Aye Roger that, yes I have looked for this type of info on all the modern and legacy era missiles but nothing really tells you how good any of them really would be in a combat situation or whether this one or that one could defeat Chinese or Russian AA systems or vice versa .

It’s a public forum, the propaganda is the media you consume.

If your vessel ever gets to the point of relying on a CIWS system to stop a harpoon or any other anti ship missile, you are having a very very bad day.

Possibly even more folly not be able to launch any, though.

The USN and RAAF have both fired Harpoon from Poseidon at previous RIMPAC exercises:

It shouldn’t be too long before LRASM is integrated and operational on USN and RAAF Poseidon.

I’d imagine when Norway receives its Poseidon in a few years that JSM will be integrated on their aircraft.

Might not be….the Australian’s were looking to fund the integration work (as they have ordered JSM as well and build some of the seeker) but it has gone quiet in recent years. The Australian’s are also ordering LRASM and are JASSM users, both of wich will get integrated to P-8 by 2026.

It might be sensible for the UK to also get some LSRAM for its P8s and put in the mix with its Harpoons for a shorter to medium and a long range capability.

I’m Australian and as at today JSM has not been ordered (it has been ordered by Norway and Japan for their F-35A fleets). That’s not to say it won’t be ordered, especially with the development involvement to date, but no Government announcements as yet. It’s likely that in the future the RAAF and RAN will use ‘multiple’ types of AShM such as JSM, NSM, LRASM, even SM-6 has an anti-ship capability. As for JASSM, there is no news as to what will happen with that capability when the last Squadron of Classic Hornets retire at the end of the year.… Read more »

Harpoon from P-8 might be useful in an uncontested environment, but for anti-shipping in a hot war we need to be giving F-35 and the Vixen UAS some effective stand-off penetrators. Spear cap 3 is very good for small vessels or to target C3 and effectively take larger ones out of the fight, but supersonic Perseus is needed to sink ’em. JSM / LRASM could be an interim measure.

There was once a plan to use Nimrods in a strategic bombing role if/when the circumstances arose. As we all know, the Nimrod fleet was withdrawn shortly after the plan was formulated.

SLAM-ER has been tested by P-8. That would give it a basic stand off land attack capability.

I understand the P-8s we are buying come wired for this Harpoon 1C and that we will get missiles too. Would Block II be a shoe in?

They will be Harpoon II from US stocks.

Would prefer LRASM. That is being integrated by the USN in the next few years.

Doesn’t that make Harpoon II a foregone conclusion for the interim AShM?

This is interesting, a memo from the acting secretary of the US Navy: Memo reveals US Navy must pick between future destroyer, fighter or sub for FY23 plan (defensenews.com) Memo says some programs are essential and must continue: The Columbia ballistic missile sub replacement program, investment in improving targeting and cross platform intelligence sharing within the Navy (Project Overmatch) and investment in improved teleworking facilities for training and education in the experience of Covid-19. Hes also saying there will need to be a cost saving program demolishing naval infrastructure to save money on maintenance. However the gist of the memo… Read more »

Do you think that there could be any crossover and shared development with a T26+, T83 between the UK and US. Even the successor to the Astutes? If it’s in a similar time frame. If would be good to sell or license a T26+ type vessel to the US considering they’ve been open to foreign designs lately.

Ok ASM Missile engagements. When you launch against an FF/D/C you don’t launch one. You launch between 2 and 4. You plan the attack profiles to do doglegs and to come from various points of the compass and arrive on target at the same time making countering the incoming missiles more difficult and upping the hit probability to almost 100%. The problem with doglegs is it decreases the “as the crow flies” engagement range. Whilst the total flight length may be 100km, with doglegs, the direct shooter to target distance will come down to way less than that, say 50km.… Read more »

From what I know/remember on the MK46 (it’s been awhile since the RN got rid of it…I last worked on them in 1988 when we then got Sting Ray onboard) and the unclass bits on Sting Ray I can discuss. So this should cover the latest MK54 Mod 1 variant Q1. It may get to 45 knts on a good day in shallow water but thats its limit. Sting Ray is substantially faster. SR has a better probability of being able to catch a target from its water impact point because the target is not going to be pulling away… Read more »