Home Land Pathfinders – A look at the elite force that leads the way... 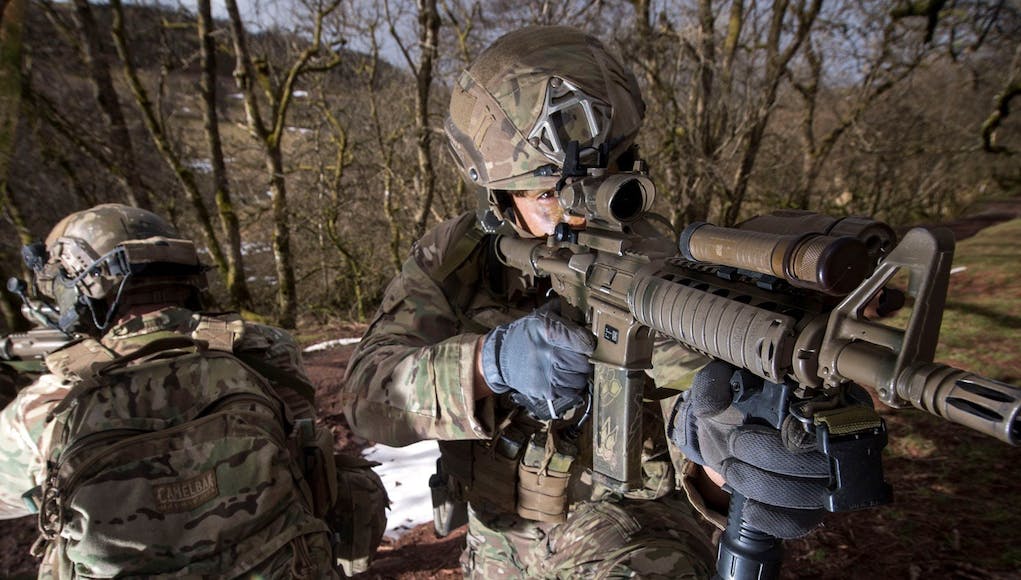 The British Army have discussed the way the Pathfinders operate and it makes for some interesting reading.

PF operate behind enemy lines in small, self-sufficient patrols, finding and relaying vital information back to Brigade HQ to enable it to plan and execute missions. A key role is identifying drop zones and landing zones where the main body of troops can be parachuted or landed by helicopter.

According to the Army, a Pathfinder soldier said:

“We are the first on the ground and our main role is to set the conditions for the insertion of the main fighting force. We work in small teams away from support, so we need to be self-sufficient to be able to get ourselves out of trouble – if we get seen by the enemy or come under fire we want to shoot back and get out of there as fast as we can.”

Fast-moving tactical scenarios on the ranges at Sennybridge are the culmination of a six-week selection process for soldiers looking to join Pathfinders, with the highest standards of fitness and soldiering skills expected from the outset.

“A soldier looking to join Pathfinders has to be robust, very physically fit and highly motivated. It’s a very arduous course and I was very proud – and excited – when I passed.”

Big turnover in that unit as so many go on to SF.

I still recall an excellent documentary from the mid 90s called Defence of the Realm and one episode was all about Pathfinder Platoon.

In any other Army they’d already be classed as SF.

Wow, what a remit they have.

This is where the army should be investing.

We have a small army, we should be the tip of spear. The Pathfinders are beyond that, amazing stuff. Can you imagine?

Read a book recently about their role in sierra leone. An astonishing story and preceded by a tale about a new parachute method they invented where they could drop from civilian airliner heights (30,000ft +) so they could technically be dropped from the bomb bay of a B1 bomber. They needed oxygen to drop from that height and develop techniques to prevent them going out of control in the thin air.

Another book I read was about their exploits in Iraq and that was nothing short of super hero status.

Yes. But SF are beyond that still.

In the RM there is an equivalent called Brigade Patrol Troop, similar mission.

Don’t know much about this but why have pathfinders and the SAS? Don’t they overlap?

Course not. SAS are strategic troops and PP are a sub unit of 16AA Bde.

They both take the Free Fall course at Brize Norton and use differing weapons to regular battalions of line infantry so are an elite unit in that regard.

Also Pathfinders are not part of DSF or considered part of SF, neither do they have Counter Terrorist roles or a host of other responsibilities.

They are however pretty elite as mac says and a stepping stone upwards as the entry requirements are tough.

Aren’t the Pathfinders 1 Para? I thought one of the para battalions was re-roled perhaps 10 years ago to sit somewhere between the other 2 para battalions and SF as a type of elite, light recce unit

I think the unit i’m referring to are the “Brigade Reconnaissance Force’. So are the Pathfinders a Company or Platoon sized unit attached to 16 AAB or as part of 1,2,3 Para?

Julian. 1 Para form the bulk of the SFSG Special Forces Support Group which is made up mostly of 1 Para plus elements of the RM and the RAF Regiment. Sceptics say General Jackson created the unit as a way to prevent one of the 3 Battalions of the Parachute Regiment being cut by transferring them to UKSF which is convenient but not really true as they do a useful role freeing up real tier 1 special forces units for other primary tasks. Pathfinder Platoon is just that, a platoon, operating independently in support of 16 Air Assault Brigade. Nothing… Read more »

Thanks Daniele, as you can see I got about 3 ideas mixed!

On the right track though mate!

Perhaps an article about the RM equivalent: The Brigade Patrol Troop.
Often missed out… Small elite recon unit attached to 30 commando.
Six four man teams. Identifying amphibious landing zones and specialist artic recon. They all do the mountain leaders qual arguably one of the hardest regular infantry course in the military outside off special forces. And I believe they do serve in and alongside SFSG as part of membership of the BPT. They also conducted joint patrols/ops with the SBS during the Falklands. This is an Elite reg unit.

Daniele: The Royal Marines Brigade Recce Force is part of 30 Cdo, not 43 Cdo, the latter of which has a completely different role.

They use different weapons to the regulars so are an elite in that regard ! But surely the problem is that with a lot of our ‘special forces’ there is no other way of categorising ‘special forces’. The definition of an elite is surely there performance on numerous battlefields in numerous wars. But on that definition the Paras for example are in no way an elite within the British Army. I can hear some of you groaning but I would suggest Arnhem study the performance of the Airborne div not just 2nd batt. Again study Afghanistan, Aden and the confrontation… Read more »

Your correct! I got my Commando numbers mixed up!

Was used to the older titles.