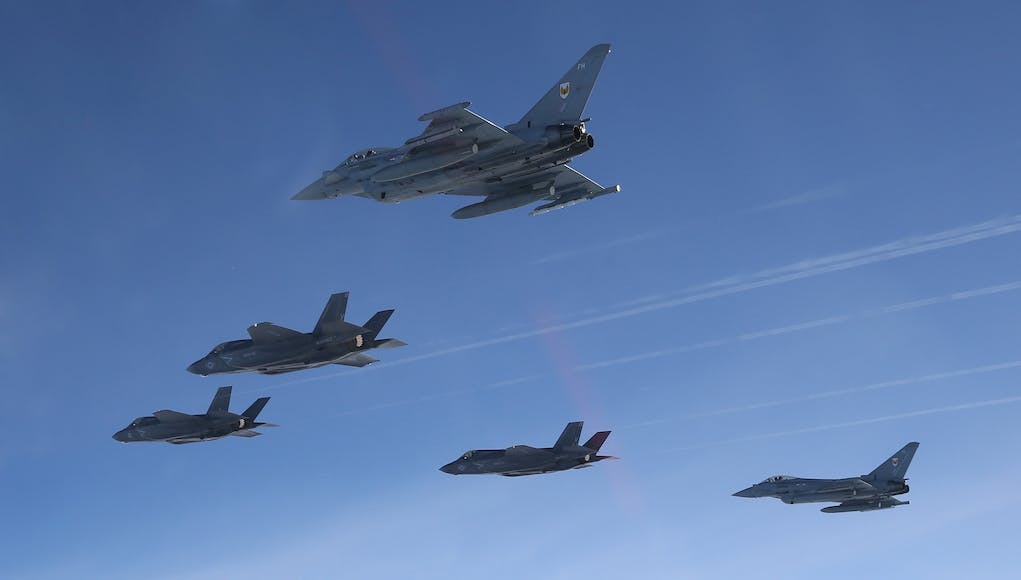 The following gallery of images is from an historic event in UK aviation history as the F-35 arrives in the UK for the first time, escorted by Typhoons. 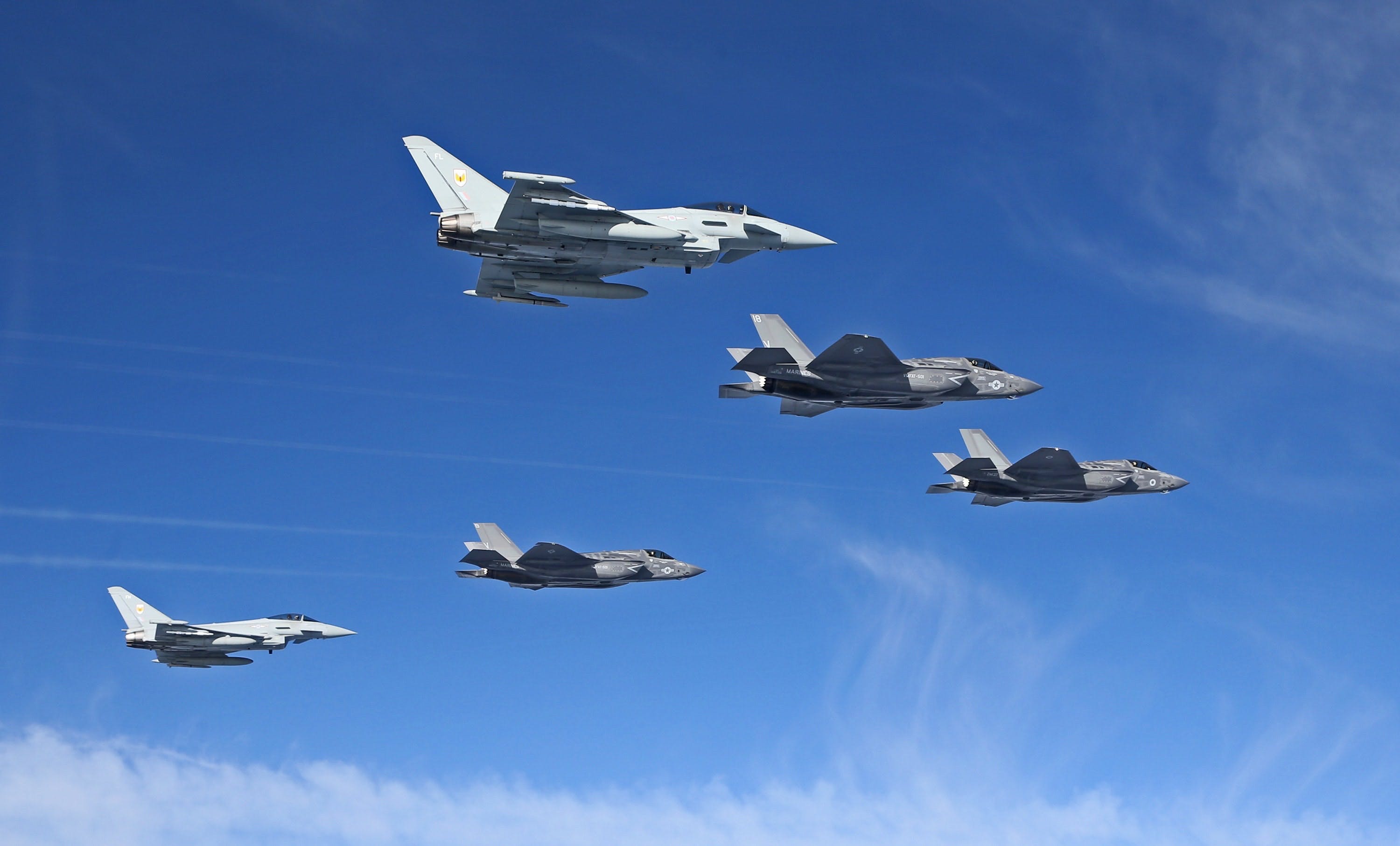 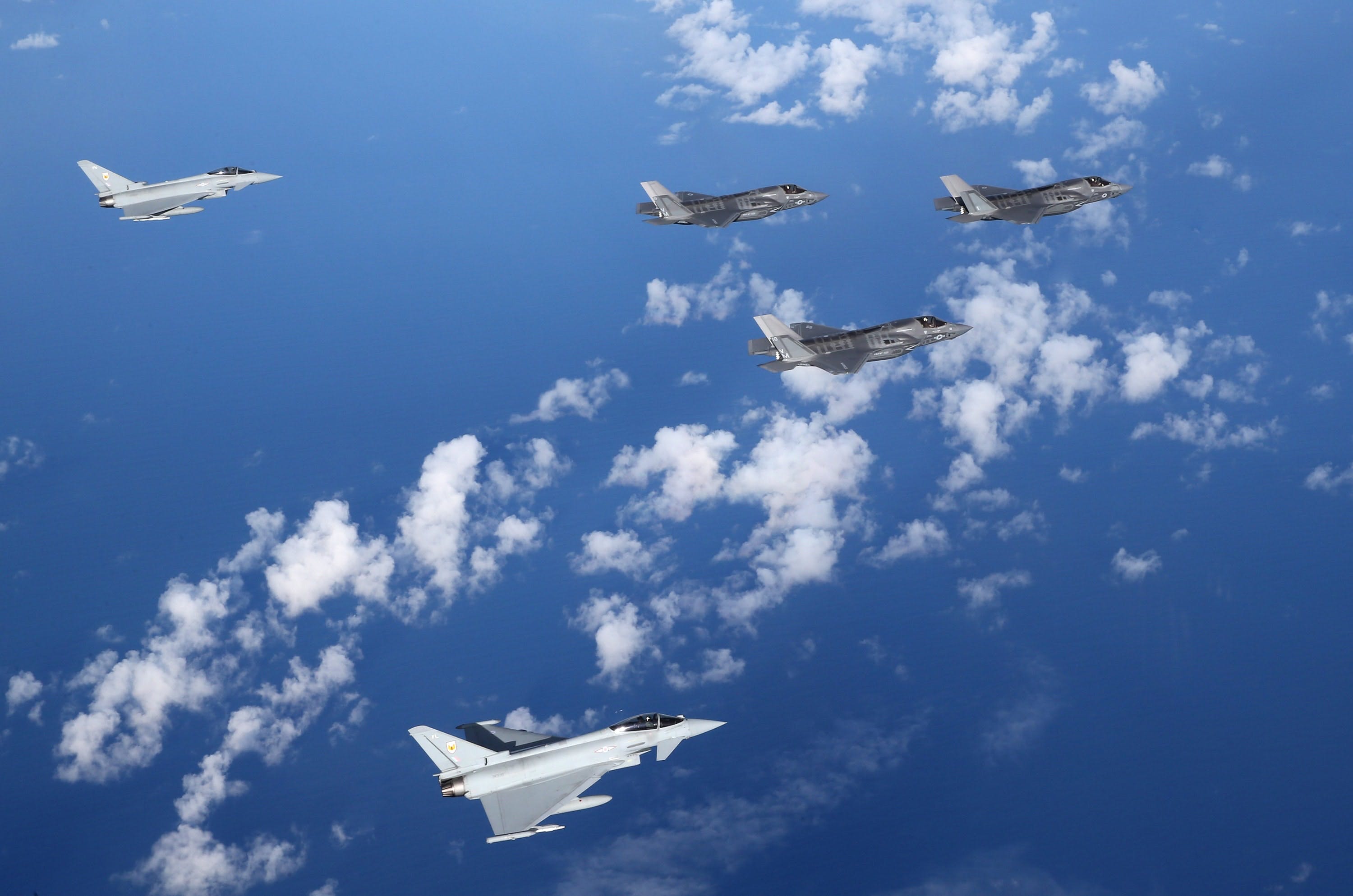 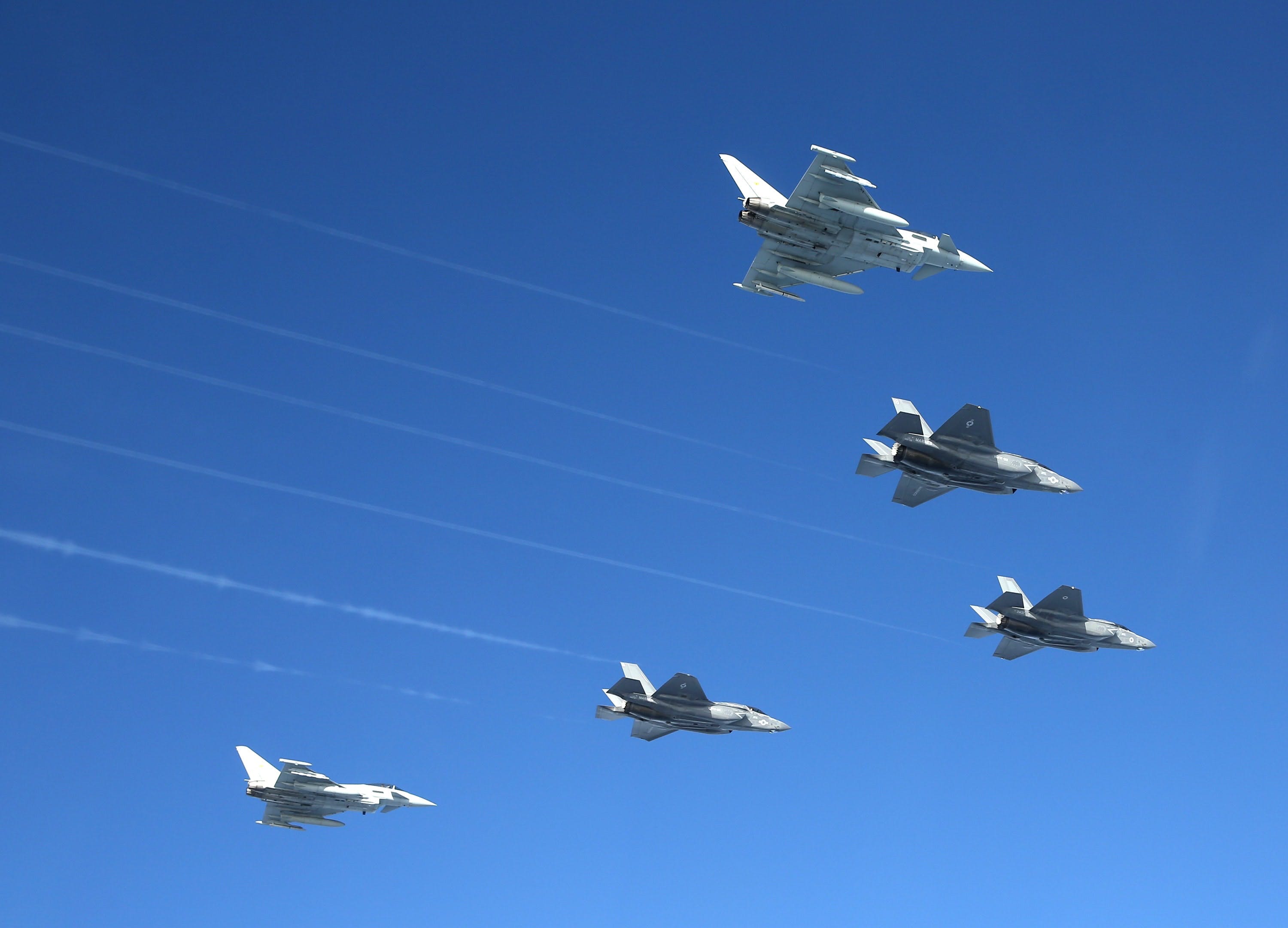 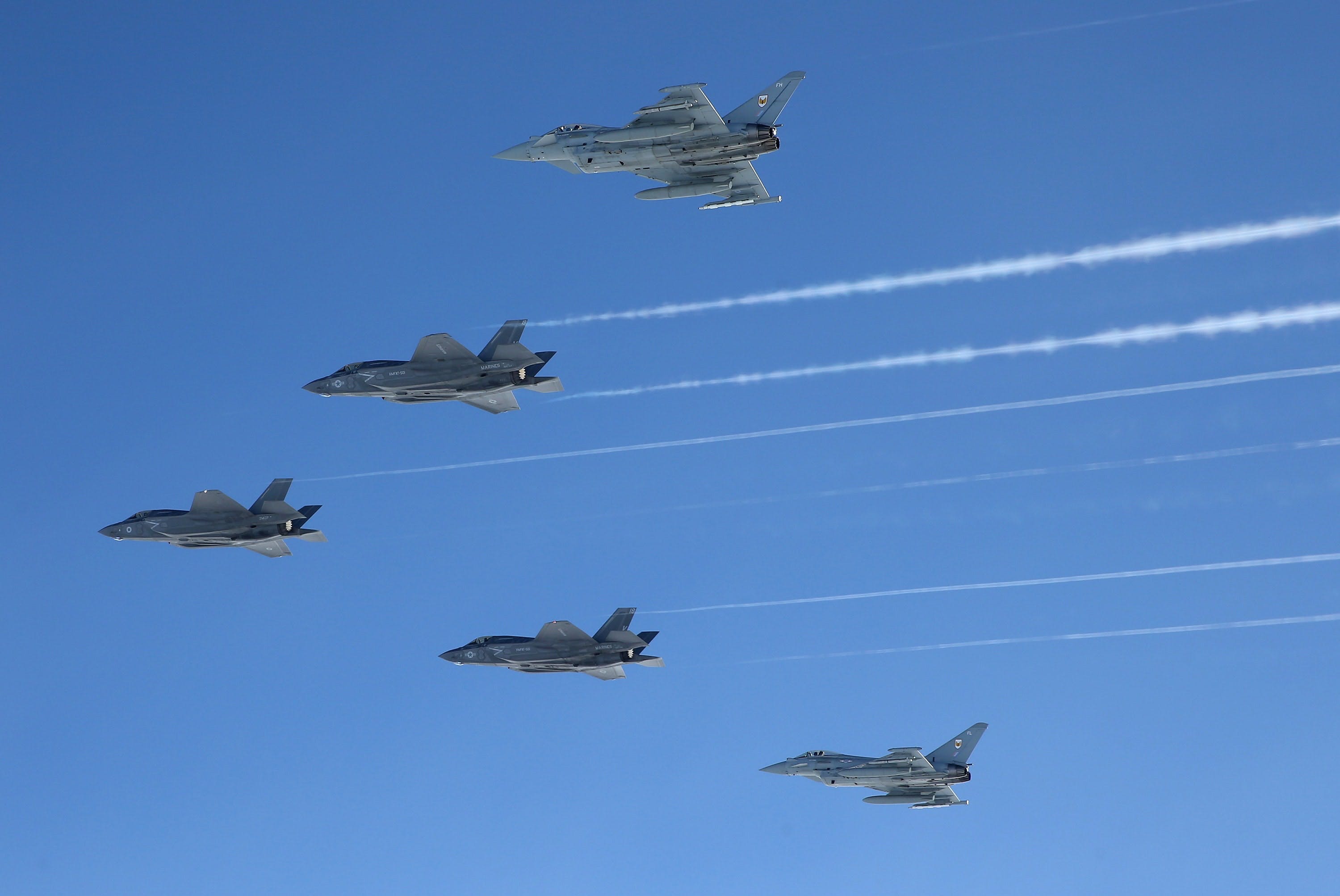 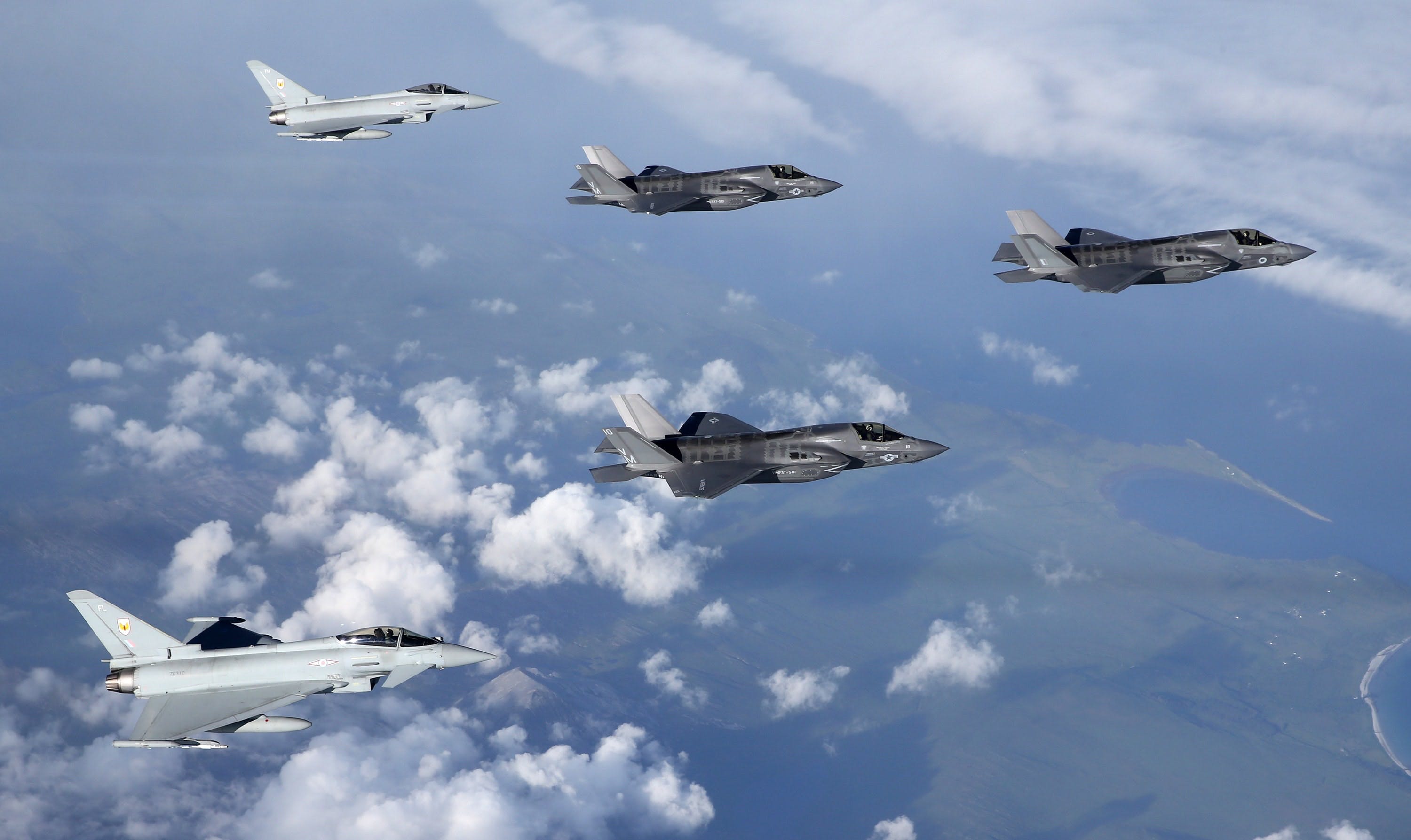 According to an MoD press release, the first of Britain’s new supersonic ‘stealth’ strike fighters has touched down in the UK for the first time. The F-35B Lightning II jet was flown by RAF pilot Squadron Leader Hugh Nichols on its first transatlantic crossing, accompanied by two United States Marine Corps F-35B aircraft from their training base at Beaufort, South Carolina.

The combined US/UK team of aircrew and engineers are here in the UK to demonstrate just what the 5th generation state of the art aircraft can do, flying at the Royal International Air Tattoo and Farnborough International Air Show over the next few weeks.  The aircraft are due to enter service with the Royal Navy and RAF from 2018.

“The F-35Bs are the most advanced fast jets in the world. Whether operating from land or from one of our two new aircraft carriers, they will ensure we have a formidable fighting force.

They are part of our plan for a stronger and better defence: more ships, more  aircraft, more troops available at readiness, better equipment for special forces, more being spent on cyber – to deal with the increased threats to our country.”

“The arrival of F-35 Lightning in the UK is an important step towards our delivery of operational capability with the UK’s first ever stealth fighter aircraft.

Operating from land bases or our new aircraft carriers, the F35B Lightning will provide ‘next generation’ advanced sensor capabilities which, when combined with its low observable, ‘stealthy’ design, allow the pilot to see more, know more and act faster than the enemy.

Our Lightning Force is developing very quickly and we are well prepared for the arrival of our first operational squadron (617 Sqn ‘The Dambusters’) at RAF Marham in 2018.”

It should be called Gnat. Versatile,manoeuvrable,light and tricky. Not reliant on speed alone. Unseen till too late. A Gnat.

Great to see.
Best of luck to all concerned

“Typhoons escort F-35 into British airspace” – Maybe TD should do a second post of the article with an alternative headline for the F-35B haters, something like “Troubled 5th generation F-35 easily intercepted by 4th generation Typhoon” 🙂

Only joking but on a serious note what special measures does the F-35 use when flying in civilian airspace? If it’s got negligible radar reflection that must play havoc with air traffic control. Does it have some sort of transponder that it turns on when wanting to be seen, a bit like someone wearing a high-vis jacket?

All aircraft must have a transponder in them so they can be tracked more easily. Basic radar tells you the size of the object, speed, height, distance and direction. It can’t tell you what the aircraft is, for example.
There have been occasions in war where this transponder has been switched off and the aircraft has been shot down by friendly fire. Granted they are rare.

It mounts four small devices called “Luneberg reflectors” or “Luneberg lenses”–two on the upper side just in front of the vertical stabilizers, and two on its underside at about the same location. These greatly increase its radar cross section.

We use to hang radar reflectors off the side of boats, but not sure what planes do.

Yeh probably why they have transponders/military equivalent, to squawk ATC also why they’d have escorting typhoon aircraft as they’d show up. They used to do similar with old lighting aircraft and nighthawk f117 aircraft probably for same reasons that and to disguise the engine noise.

A nice low fly past of cities throughout Britain would be nice?

Great to see updated military equipment now showing its ‘face’. I just can’t wait for the new aircraft carriers to be in Portsmouth. Lets hope the engines are as good as the rest of it appears to be.