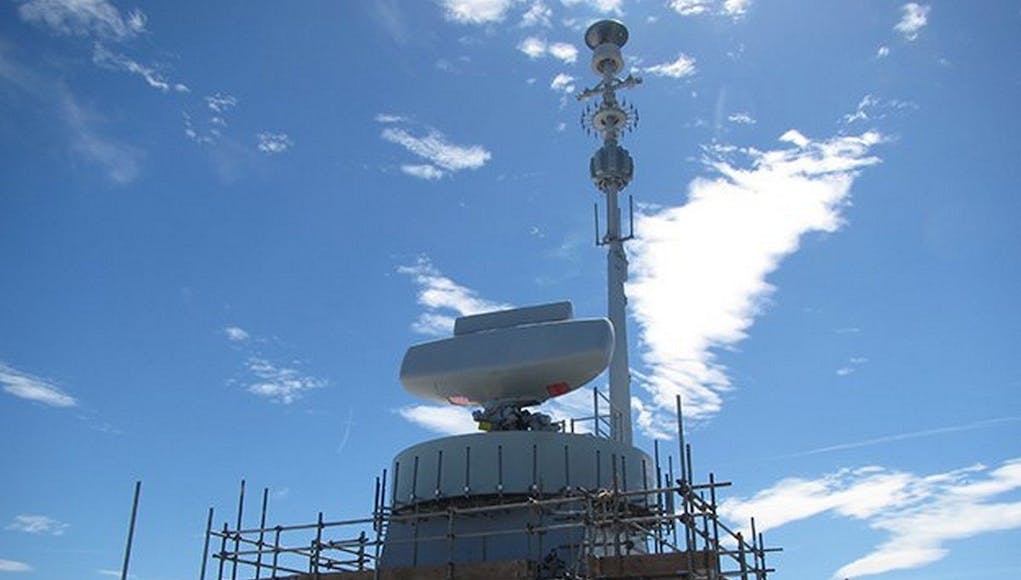 The state of the art radar, capable of detecting objects as small as a tennis ball, travelling at three times the speed of sound, and more than 25Km away, has been successfully installed to Britain’s second Queen Elizabeth Class aircraft, HMS Prince of Wales say the Aircraft Carrier Alliance.

“Artisan 3D is already in use delivering air traffic management on HMS Queen Elizabeth, providing the carrier with unparalleled awareness and control of the skies around her.

The installation of Artisan on HMS Prince of Wales marks another major milestone in the preparation for sea trials, prior to the carrier joining her sister ship in her home port of Portsmouth next year.”

“Artisan is a ground-breaking radar system that delivers real capability to the Royal Navy in its supreme accuracy and uncompromising tracking.

In addition, its world-leading electronic protection measure ensures that even the most complex of jammers will not reduce its effectiveness.  We are proud to be able to bring this advanced technology with its air traffic management capability to the second of the Royal Navy’s new aircraft carriers.”

“Installation of the Artisan MRR is a key milestone for the team as this will provide the start line for commissioning over the next six months and ignite a change in focus from installation to setting to work the Mission System.

Ewan Ballantine our lead Radar Engineer, has timed the installation of Artisan with perfection to allow ship maturity to take place which is testament to the integrated team work model.  A considerable amount of logistical coordination has been required to ensure the right safety, carriage and lifting capability is in place do deliver this key milestone.”

In the coming years, HMS Prince of Wales will take over F-35 trials to allow HMS Queen Elizabeth to return to dock for her routine re-certification work.

HMS Prince of Wales is currently on track for float out and to start sea trials in mid-2019.

HMS Queen Elizabeth is there now and once HMS Prince of Wales comes into service then the two ships will work side-by-side ensuring one is always available to be used and the second one will be at high readiness and conducting training and maintenance. The ships will leapfrog one another through those roles and that is what continuous carrier availability provides.”
0 0 vote
Article Rating

” our lead Radar Engineer, has timed the installation of Artisan with perfection to allow ship maturity to take place which is testament to the integrated team work model. A considerable amount of logistical coordination has been required to ensure the right safety, carriage and lifting capability is in place do deliver this key milestone.” Someone is blowing smoke up their own arse! Translated it means they did what it said to do in the Project plan, in the right order and surprise, surprise it was installed it correctly… Cynical? Yep…because Its hot (41 Degs) and its humid (40%) and… Read more »

What it does mean is that no doubt down the line he will get a OBE/CBE for doing his job as one might expect. But then I prefer that to the committee giving them to theirselves as recently reported.

There seems to be a trend from every other navy to go for multiple fix plane radars rather than a single rotating option. I’ve seen that argument that a single rotating radar allows it to be mounted higher for better over the horizon performance but why is the RN the only one going down this route? Weight and height should not have been an issue on the carriers so should they not have placed fixed radars to provide constant 360 degree coverage of the air space?

Politics maybe? We simply don’t have a home-grown fixed panel radar and maybe there was pressure for it to be a BAE unit.

As far as I know the benefits for rotating radars is that they can be smaller, cheaper and easier/cheaper to fix.

Commonality of the system with T45 and potentially onwards?
I know that doesn’t answer your general question about why rotating radars in the first place, but what you said about weight and what Lee said about cost are probably the reasons why in general.

I can’t work out Artisan. I’ve seen things about it that seem to quite conclusively point towards it being AESA but then seen other things that seem to conclusively point the other way. Does anyone know what it is? Is it a sort of demi-Sampson, i.e. single rotating AESA array or is it PESA? Also, does it share some or all of the back-end architecture and algorithms as Sampson or is the back-end a completely different beast?

Anyway, good news to hear that another milestone has been achieved. Congratulations to all involved.

LOL, i have all the specs on a laptop i bought via ebay, for a 10 million rubles it can yours comrade. Please send the payment to my Nigerian bank account and i will send you the laptop in the post 🙂

Me not Russian spy, me good England person only interested in our great UK technology but if could to tell me full pin-out of connector EA-138 on main circuit board and bias voltage used for flux capacitor would be very grateful.

I have not been able to see anything official stating Artisan 3D is AESA, if it was I BAE would slap it all over its description for marketing. I think its mechanically scanned which also suggests its not. But I don’t know the first thing about Radars, so it may well be a mechanically scanned AESA. Did I read in the forum somewhere that the UK has offered to upgrade its next batch of T26 with the Australian radar if they win the export contract? It could just be hear say but would improve the sales pitch.

Not exactly hearsay re the Australian radar but I think you might have extrapolated what you read a bit too far. The RN/MoD have agreed to evaluate CEAFAR (the Australian radar). Technically I’m pretty sure it was a stand-alone announcement and not explicitly part of any T26 bid publicity but it’s not hard to join the dots and make a pretty safe assumption that the timing of the announcement (November last year) was intended to help with the T26 bid. The announcement is only a commitment to evaluate though so it is a few steps away from actually offering to… Read more »

Artisan is a mechanical/PESA hybrid – it has capabilities similar to AESA. The advantage of the mechanical aspect is that it enables a very wide scan area – I think this is over 70 degrees horizontal. You are correct in that the technology of Artisan enables multiple beam forming and high object tracking as per Sampson – it uses about 85% of the same code.

Thanks Matt. That’s good to know that Sampson back-end technology is alive and well and hopefully, given it’s in Artisan too, still under quite active development. The back-end stuff at least is, as I understand it, genuinely world-beating so I would hate BAE to take its eye off the ball and lose that lead. Isn’t one advantage of AESA better resistance to jamming/EW because it can form multiple beams at different frequencies whereas PESA can only be on one frequency at a time? Should we be concerned that what is the UK’s main radar isn’t AESA or does the excellence… Read more »

What! No Putin bots telling us about their imaginary weaponry and calling everyone a Nazi or Rothchild!!
Maybe they’re all drunk at the world cup.

The silly, scared, reds under the bed, Anti-Russian comments like yours on an article that doesn’t even mention Russia I see all the time though ?

should have fitted Saab’s sea giraffe ?

You’d hope it’d be over 25km, would take 25 seconds for something Mach 3 to cover that distance.

“The state of the art radar, capable of detecting objects as small as a tennis ball”

But seriously, 25KM? That’s way too close. 250km would be impressive.

The fundamental difference between PESA and AESA is that an array of transmit/receive modules can generate the carrier wave frequency, whereas a PESA uses generally just one module for generating the carrier wave which is then then split through delay timers to steer the beam. What this means in real life is that an AESA can carry out instantaneous and multiple frequency hopping unlike the PESA. The AESA can also transmit multiple different carrier wave frequencies and in different directions which gives it a very low probability of intercept by ESM. Also because it can hop and use multiple frequencies… Read more »

Can a world-class blue water navy be ‘Green’?