RAF aircraft have carried out a major offensive in support of Iraqi ground troops in an operation lasting 10 days.

The Royal Air Force say that throughout the 10 day operation in the Makhmur mountains, the RAF used 42 Paveway IV bombs and 10 Storm Shadow cruise missiles.

“The operation builds on the success of recent years and represents a significant increase in activity from previous months. This was the first operational use of the Storm Shadow cruise missile from a Typhoon FGR4 aircraft.”

“The operation began when Daesh extremists were confirmed to be based in a network of caves in the Makhmur mountains and concluded on 22 March. Since the caves were assessed to be a particularly challenging target, three Typhoon FGR4s were tasked to conduct an attack using Storm Shadow missiles, the remote area having first been checked to ensure that no civilians would be placed at risk. The strike on the Daesh targets was assessed by subsequent surveillance to have been a success.

Operation Shader is essential to dismantling Daesh’s networks and reducing the terrorist group’s global ambitions. Though Daesh has been territorially defeated, it is estimated there are approximately 10,000 Daesh terrorists still at large across Syria and Iraq. The UK, together with 82 partner nations of the Global Coalition, therefore remains committed to working with Iraq to not only degrade and ultimately defeat Daesh but to also enhance its security.”

Secretary of State for Defence Ben Wallace was quoted as saying:

“The British Armed Forces, alongside our Iraqi and Coalition partners, continue to root out Daesh terrorists from where they hide. The UK is committed to defeating Daesh. This operation will prevent the terrorist group and its toxic ideology from regaining a foothold in Iraq and reduce its capability to coordinate attacks around the world.”

In addition to air strikes the RAF is also carrying out Intelligence, Surveillance and Reconnaissance; Air to Air Refuelling and Air Transport sorties using Reaper, Voyager, C-130 and A400M aircraft.

FGR4s? Tranche 1s that are about to be withdrawn?

I hope we make a jolly good sale of those Tranche 1s.

If indeed these were FGR4 Tranche 1s, then why in God’s name would we want to discard them?

They are not T1’s. T1’s can only carry air to air missiles and Paveway 2. Paveway 2 is no longer used as far as I’m aware.

From what I read the Stormshadow (950lbs) warhead is 2x the Paveway, so can do a lot more damage. Presumably it is accurate, because overall the entire missile is still some 3000lbs, that’s a lot of kit to go ‘bang’.

Yes, Stormshadow is an impressive bit of kit, with very long standing off range. Enhanced Paveway 4 has replaced most of the earlier Paveway models. It’s a 500lb warhead, but can provided 80% of the kinetic bang as a 1000lb Paveway due to some very clever fusing options. Paveway 4 can also be re-targeted In flight, hit moving targets, and be steered away to a safe area if civilians come within range. The warhead can also be dialled down to take out an individual sniper for example without blowing up the hospital next door. Very clever. 6 weapons can also… Read more »

Here’s some more information on the weapons loadout for the FGR4 towards the bottom of the article. Impressive!

Likely to be given away to Romania who need a modern combat aircraft but cant afford to purchase new. This gave away will probably cost UK taxpayers significant sums of money as we will no doubt have to train the Romanians in the jets use, servicing, routine maintenance etc. Plus probably give them a whole inventory of spare parts. Makes me suck just thinking about it. If we are giving capable and perfectly good combat aircraft away. We should at least be replacing them with a firm commitment to at least 80 F35Bs and ideally another tranche 4 order for… Read more »

Nothing is ‘given away’ if a nation does buy Typhoon T1, they will pay for them, along with all the training, maintenance contracts, the lot. They will most likely be stripped down, and the spare parts will go into the inventory for the remaining Typhoon fleet.

Unfortunately HMG is strapped for cash due to 100% debt-to-GDP, racked up by senseless lockdowns. At least money is being put into Tempest. I still believe we have the funding available, but we’re squandering it away into HS2 and other ‘grande projecte’

Romania is buying used F-16’s from Portugal. The Tranche 1’s will be used for spares in the sustainment program, the ‘Reduce To Produce’ on Typhoon recovers around 70% of the aircraft.

They will be used for spares, we’ll probably recover in the region of 70% by value to use in the sustainment program.

Not Tranche 1. T1 don’t do Stormshadow or PIV

Project Centurion was Tranche 2 and 3 only and as they’re referring to Storm Shadow and Paveway IV they can only be updated examples.

I think we are getting our money’s worth out of the Typhoon!

What’s this about one Storm Shadow or SCALP going astray & crashing well away from target? 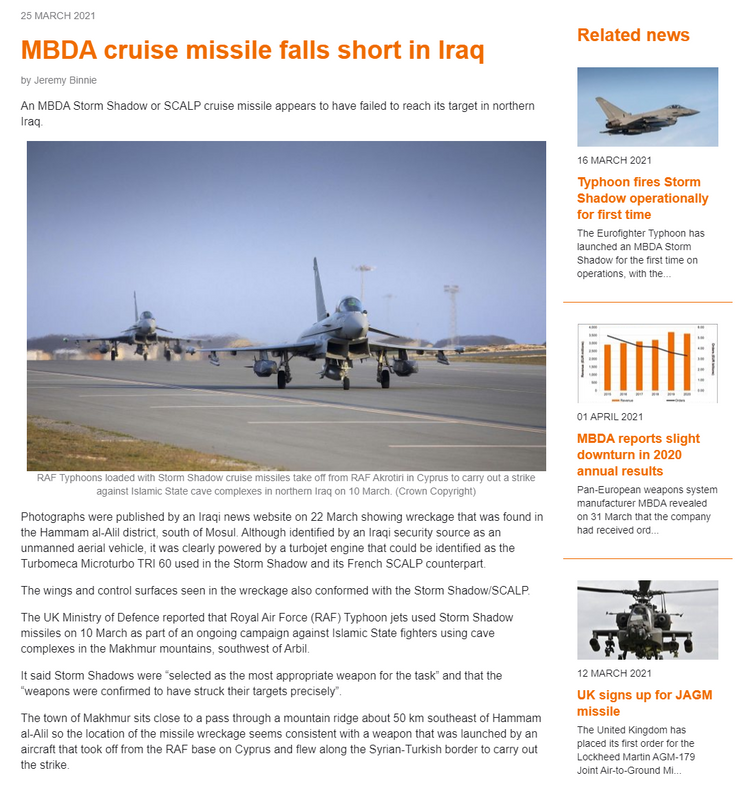 Storm Shadow is a very expensive weapon to use against these backward murderous fools?

I assume they have occupied old bunker systems, or other hardened facilities…

Haven’t you heard JC ? HM gov is awash with bucket loads of digital currency they just keep throwing it about like confetti . What’s a million or 10 here or there with storm shadow 👍🏻

much cheaper to send in some local Iraqi types with napalm fuelled flame throwers to clear out these cave systems or for a Few Dollars More 😉 fix up a few Crocodile tanks , worked in Iwo Jima a treat .

Or we are sending a very clear message to someone else somewhere else that we have Storm Shadow stockpile and are willing to use it?

they got what they deserve for being f*****g degenerates.

We sure like to use this capability we’re about to diminish (yes I know these arent Tranche 1s, but the Tranche 1s will be replaced by later aircraft that can do this stuff.

Head of the air force was recently saying they were only using the Tranche 1 Typhoon’s in the aggressor role (which suggests they weren’t considered up to scratch for QRA as previously planned) and he’s confident they can sustain 7 squadrons with the remaining 107 T2/T3’s.

So, 7 Squadrons of 12 aircraft is 84. That would leave 23 for OCU and maintenance/repair. Tight, very tight.

You’re forgetting the 4 in The Falklands – which would leave just 19 for the OCU and to account for the maintenance cycle and and an attrition reserve.

I fear it’ll actually mean 7 smaller squadrons of 9 or 10 aircraft.

UK has its own agenda. It was Tony Blair who convinced the Americans to intervene in Iraq. Thus, Iraq was handed over to Iran which Iran could never have achieved. Cunningness of the Britishers. While the rest of the Allied forces were based in main Iraq, British choose Basra. For long, it was a tradition that it was the British PM who used to be the first leader to meet the new rcted US President. No more , probably the Americans have realized to be careful.

It’s a real shame the MoD can’t manage budgets efficiently and 60 years of British governments, have forgotten that their primary role is defence of the realm. Post pandemic, this is the time to invest heavily in manufacturing equipment for every sector of British armed forces. At the expense of the over seas aid budget. Our factories, shipyards and workforce need the boost. The CCP have shown how much of a threat they are to our global interests and we must respond accordingly. Our industries can re-equip Australian, Canadian and New Zealand forces too. All it takes is the testicular… Read more »