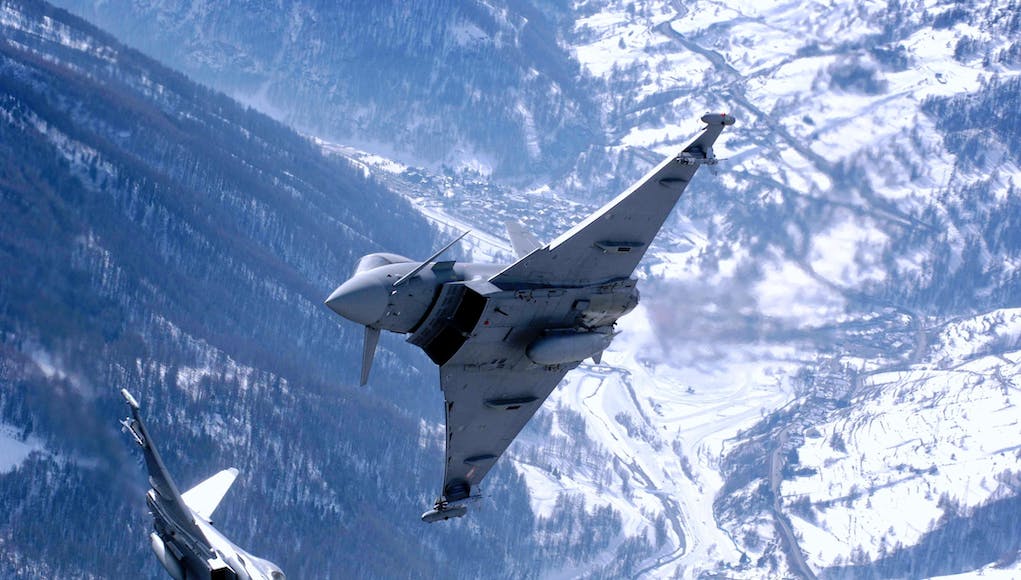 The Royal Air Force will reportedly be on high alert in the coming weeks in order to track cargo flights from the Arctic region.

The move has been prompted by an incident around a year ago in which Typhoon aircraft escorted a Lapland registered aircraft (flying from the Arctic region) over the UK’s major cities, the pilot of the craft was said to be under the influence of alcohol and very “festive”, this is especially dangerous due to the sheer volume of cargo the aircraft was carrying. This is expected to happen again.

LOL who else was taken in?

Yup, much subtler and better done than previous spoofs. Nice one UKDF.

If they plan to shadow Santa they’re going to need something far quicker than a Typhoon. Santa is clearly far more advanced than even the US and has both grasped and deployed an understanding of physics which allows him to cover most of the earth’s surface area in approximately 24hours and has reportedly been doing so for thousands of years! Perhaps Santa is the reality behind the UFO phenomenon, you know: checking his list, to find out who’s been naughty and nice: this is nothing more than covert espionage on a civilian population! In one-on-one combat with a Typhoon: Santa… Read more »

> In one-on-one combat with a Typhoon: Santa would kick ass.

No weaponry, although I suspect that some of the food left out for him isn’t that great. If it came to combat maybe he could throw some rock-hard stale mince pies at the Typhoon or perhaps some spare wrapping paper in the air intakes would do some damage. And then there’s always reindeer s**t 🙂

He has exploding kittens and laser tag weapons and unlimited tinsel chaff.

Anything travelling at speeds far in excess of hypersonic can be weaponsor, even mince pies.

Why engage when you can run away faster than anything following ? I would guess that his pressure wave would be sufficient to down anything near, but I must say I have never experienced his sonic boom, and I suppose that he has overcome the problems of compressibility and friction.

briiliant, had me going, partner not stopped laughing yet, looking forward to any developments

Perhaps Rudolf’s glowing red nose could decoy ASRAAMs away from Santa’s sled. Great for the sled, but not so good for Rudolf’s nose. Still, Santa has another 8 reindeer so he wouldn’t miss one I would guess.

Would he go asymmetric

My wife’s home made mince pies could easily bring down a Typhoon in fact not sure they’re not banned under the Geneva Convention ?

For goodness sakes, I was taken in right to the “red nose” bit when I went “eh?”.

I believe he is using stealth reindeer raised in Sweden .

I thought it was only Aussie cricketers that did ‘sledging’….

Time of year and”Lapland” should have provided sufficient clue , but what a lovely thought, Happy Christmas UKDJ

Now I know I’m a sucker or stupid..Or both..thought it was about an Ilyusin Il 76 or Antonov 225 straying into UK airspace ….lol.
Brilliant.

Really good, i was taken in for the first couple of sentences.

Quite well done I have to say, you got me, bravo.

Eas that a russian tuplitov over the northeast uk today? Absolutely massive propeller aircraft with a thunderous propeller sound.?

Even Santa can have a tipple or two on his rounds

Seriously, lay off the booze whilst flying Santa.

A voice from far away.

Hi,
Provided the reindeer gorged themselves before flight, if Santa does have to make a fast getaway from a fighter jet they could produce more than enough methane for a real blast ignited by Santa’s Zippo lighter. Heaven help him if he hasn’t fastened his seat belt, hopefully he’s gave out presents to all the kids down under before his flight into our airspace.

When stationed in Berlin we had American Forces TV and on Christmas Eve Morning we wer advise to stand by as a UFO had been spotted aproaching earth. This was kept up eery hour of the day with information about the strange craft which had 6 rindeer power and heavy with boxes and the kids loved every second of it.
Happy days.

All I can say is I’m glad to see a Vixen and Comet still airborne and doing a sterling job!

Perhaps we should use an F35 and creep up on them.

Thats if you can find one. Evidently they are invisible.

RAF banter and bollocks, what – ITbubble

But the RAF only have a few planes!

Arctic Intercept! | Flying in the Spirit