The Ministry of Defence has confirmed that Royal Air Force personnel have provided “engineering support” to Saudi Arabian aircraft involved in military operations over Yemen.

Responding to a parliamentary question from Labour MP Lloyd Russell-Moyle, Minister for the Armed Forces Mark Lancaster denied that the RAF had been involved in planning operational sorties for the Royal Saudi Air Force (RSAF).

He did however confirm the following:

In March 2015 Houthi rebels forced Yemen’s president, Abd Rabbu Mansour Hadi, out of power and in to exile. Saudi Arabia saw the rebels as backed militarily by Iran, and began an air campaign in Yemen. The Saudi-led coalition has since received logistical and intelligence support from the US, UK, and France.

The coalition has repeatedly been accused by human rights groups of conducting unlawful airstrikes on civilian targets. Research from 2016 concluded that more than one-third of all Saudi-led airstrikes had hit civilian sites.

The UN says more than 6,800 civilians have been killed in Yemen since March 2015. Well over half of these casualties have been caused by Saudi-led coalition air strikes. On average, almost 100 civilian deaths or injuries were recorded each week in 2018.

The RAF carried out a joint exercise with the Royal Saudi Air Force  in November 2018, with the MoD saying it “builds upon the UK’s commitment to security across the entire Gulf region”.

We already knew that the RAF had provided "generic training support" to the RSAF, including on Exercise Green Flag late last year.

Lancaster did concede that the "subsequent utilisation of trained RSAF aircrew is not monitored" by the UK.https://t.co/OJU3w20UJf

This is the first time however that we’ve learned of the UK’s involvement in maintaining Saudi jets whilst they’ve carried out strikes over Yemen.

The RSAF uses the Eurofighter Typhoon, the Tornado, and two variants of the F-15. It is unclear which type of aircraft the UK has provided engineering support for.

UK military have been embedded with Saudi forces since the 1960s.

As part of the Al-Yamanah/Al Salam arms deals BAE systems would provide support and training, which included maintenance on the aircraft (Hawk, Tornado and Typhoon), but also maintenance on some weapon systems such as Sea Eagle, Alarm and Sky Flash. I think these have also been retired by the Saudis now, as they were the last users of these weapons. BAE Systems have a deal with the MOD whereby serving and ex serving personnel would train and supervise Saudi personnel with the maintenance on the aircraft. During peacetime this did include how to arm and disarm the aircraft. There will… Read more »

Although being true, and imo much more interesting, that doesn’t make a sensationalist head line.

Probably flying the airplanes as well.

As said, not really news, RAF personel have been seconded there (in various capacities) since the 1970’s, when the Lightning’s were delivered.

Not news that the British are doing that. But I truly feel for the Yemen conflict as it can be boiled down to a disaster of British foreign policy, of course they were the ones that forced the British to leave in the 60s, mainly by Russian and Arab propaganda by the likes of Nasser, but the British basically left the control of the country in the hands of terrorists, the NLF and things havent really worked out well for them since! Aden/South Arabia was one of the most beautiful and prosperous nations in the middle east in the 50s,… Read more »

I know this is going to raise a few comments, but…. I’m not trying to be racist, but I am going to point out a fact. When we were running countries as part of the Empire, there was a lot less corruption. In fact there was a lot less fighting in general. I must agree that the native populace were not generally developed with schooling or health care which was a massive failing on our part. So the question remains, even though we controlled these countries such as Yemen (Aden) to our own ends were they better off, than by… Read more »

Look what has happened to Rhodesia. The bread basket of Africa.

An excellent example to endorse DaveyB’s comments above. The Empire never was perfect and the people on occasion were not treated well. We know that. G.B. also exploited their resources etc. However one sees the numbers of people leaving Africa & elsewhere for Europe and presumably it isn’t because their own countries are lands of milk & honey? Syria ? Although not a Commonwealth country of course. But an example of failed U.N. policy? That may be a controversial statement too?

Yes thats a better way of putting it, a failed UN policy, all these empires were fine until one day this new organisation said hey thats wrong, get rid of them now! And we did, and many of these nations didn’t quite have the time to independently develop into its own institution, I believe the brits did the best job there but not perfect!
Lets not forget, Africa wasn’t meant to be independent until the 90s! And how much better would the world be because of it!

Plain fact. Nothing makes the old British Empire look quite so good as what has happened to those countries after we left. There are worse things in life than British rule and some snobbery. As too many have been forced to discover.

I completely agree that in the 21st century colonialism is wrong, or at least without a majority from the local populous, like we have with gibraltar etc today, and of course every country should have the right to self determination and should have a say in the runnings of their country, as is the case with overseas territories today or with dominions etc of the past. But when you look at ex colonies at the time of independence and what they are like now, you have to notice, the brits(can’t say the same about other colonialists, not as many anyway)… Read more »

Absolute power, corrups absolutely. How many ‘Presidents’ in Africa , Arabia & elsewhere does this apply to? Many came from humble backgrounds. The Assad dynasty evidences this. If only we could turn back time to 2010 or before and if Bashir Assad had been the victim of a dreadful accident. Perhaps that (dreadful) accident may still happen. Allah u Ackbah.

It very easy to look at issues like this as binary issue. But it’s far from that, the west not supporting Saudi could have different outcomes. 1 could be they go to China for weapons, they already buy Chinese drones. So dropping support solves nothing. Alternatively Saudi pulls out of Yemen effectively handing it to Iran. A now emboldened iran looks for its next target and another proxy war. A Yemen run by Iran is no better than one run by SA. From a defence perspective these deals keep our fast jet production going and billions in revenue for the… Read more »

Is the headline correct? Used against Yemen. Sounds like SA is at war with Yemen which is not the case. SA is try to reinstate the internationally recognised government which was over thrown by Iran via a proxy. It’s seems in the UK press Iran holds some moral high ground and they would be happy to see a Iranian run Yemen.

Some interesting developments re the F15.

“Dan Grazier, military fellow with the Project on Government Oversight (POGO) watchdog group in Washington, DC, told Jane’s on 12 March that he believes the USAF’s F-15EX buy shows that confidence is waning among Pentagon leadership in the F-35 programme.”

Kinda obvious since the Saudi’s fly a British made plane. If the Saudi’s didn’t get help in maintaining, ect the Typhoons and Tornados they would be grounded and Britain would probably be in violation of some agreement between the 2 nations. 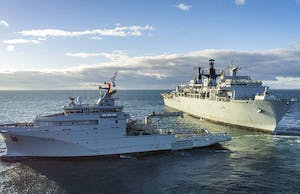