Royal Marines are in Bahrain for Exercise Pearl Dagger.

“In terms of individual training, every marine in the company has benefitted from the live firing,” Major Chris Burr, Officer Commanding of Alpha Company said.

“We are not often lucky enough to have two weeks, back-to-back, on the ranges in the UK as there is such a great demand. This has given us a chance to return to basics and then build up to advanced application on all weapon systems including, pistol, SA80 and sharpshooter. From a collective training point of view, the Urban Training Facility here is world class.” The MoD say in a release that the unit have tested themselves in a range of environments in various countries – from Albania and Qatar, to the Far East – while on duty with the Royal Navy’s Amphibious Task Group.

“UK Amphibious Task Group (COMATG) exists to respond to unfolding crises anywhere in the world where the UK’s national interests may be at risk.

As well as conducting annual deployments worldwide to prove the global reach of the Royal Navy, the task group has been activated for many operations in recent years.”

What in the hell grip is that marine using on his Gat?

It’s the fashion at the moment to hold rifles well towards the muzzle. It might work with a conventional rifle with say an 18in barrel, but not with a bullpup (or shorter rifles like M4). I think it is all about ‘pushing’ the gun on a target.

It’s called a C grip. Ti’s what all the cool kids be doing.

C clamp. Doesn’t work on a bullpup particularly well. A knights armament down grip would be the best option for this junk rifle.

We should have ordered the MARS rifles from LMT when NZ put in their order, there are so many relatively inexpensive platforms out there that far out form the SA80 I just don’t understand why we are still sinking money into it.

Investment continues with the L85A3 upgrade.

My personal choice for a new rifle would be a variant of the USMC M27.

About perfection in service rifle terms in my opinion.

VG’s are part of the system.

You learn something new every day. Is it s FAD or taught?

That the new rage from the USA, it made its way from three gun shooting (where they use ultra light AR15’s) to tactical trainers.
It helps control the muzzle rise but I don’t think there is much need for it with the SA80 considering how overweight it is.

We’re sticking with it because we’ve already sunk so much into the upgrades. L85 has come a long way since the 90’s when the mag would fall off!

Sunk costs are sunk costs. But it is a bit of joke now.

Yeah, they should be buying the HK416 instead of the outdated M4.

The optics and lasers cost far more than the rifle itself (at least they should do unless your the MOD). There is no reason the army cannot remove the Elcans/Trijicons and Lasers and attach them to an LMT or Colt Canada C8.
The cost of developing custom rails just for the SA80 is more than the £470 the US is paying for its basic M4’s

Could solve the problem easy enough. Have a shoot off between the SA80 and the M4. The problem would be when the SA80 wipes the floor with the M4 at any range over 200 metres.

Does it really though? The latest M4’s are now effectively have a free float barrel so with a decent barrel it will out perform an SA80 using any kind of brace. It’s only advantage will be shooting from standing as the weight is all at the rear so needs less support. The British Army posted a video of someone clearing an assault course setup to represent an urban environment, the amount of transitions and unnecessary manipulations the soldier had to do to make up for the poor rifle design was a disgrace that would not be necessary with an M4,… Read more »

BB85 Whatever rifle we use there’ll be no end of people slagging it off. The grass is always greener until you actually go there.

It is and always has been an ergonomic nightmare. It is a poor design. Not a question of grass is greener, given a free choice you would not pick it up.

As for 200m well after that point a modern rifle, especially used in the field, is much the same as any other rifle.

The A2 beat all others on overall score in a competition in the early 0’s if memory serves. I have no idea of the criteria nor anything to back it up, something I remember twigging to though. I’d imagine that was M16 equivalwnt though not M4.

Need to wait on the new calibers that will come out (6.5mm) before we jump weapon systems.

Just a personal view, but the SA80 is battle proven and will do until we (the USA) decide on what the new NATO Calibre is.

As for the comments on the CQC video, the amount of transitioning is just what you have to do in that situation, no big deal.

SA80 is the rifle of Theseus. The sad thing is the only thing that is now original is the poor ergonomics.

I always thought my A2 was excellent. When my bivvy pole snapped it was a superb replacement! ;0)

Sniffing too many hexamine fuel fumes I think there young man. 🙂

He’s a Para it’s a miracle if he’s got opposable thumbs !

David, both thumbs in working order, thanks for your concern about my wellbeing.

I personally love the egronimcs of the AR platform. Eugene Stoners team were spot on, the controls fall instinctively to hand, fantastic piece of design. The M27 really is the ultimate expression of the AR platform, 50 plus years of development, mixed with some excellent German engineering. The L85 egronimcs are very poor indeed, no question, but this is countered by training and muscle memory. In its A2 or A3 form, it’s reliable and accurate, weight is an issue, trigger is so so, as are the poor egronimcs. Absolutely no point replacing the L85 until a new NATO caliber is… Read more »

Yes you can train around anything, but really shouldn’t have not to do so in this day and age. Especially not when the cost of SLEP is more than the cost of replacement which is what we are doing. If this was let say £100 trigger upgrade or some other minor upgrade for the whole fleet would be a different matter. But the A3 contract is for what 50,000 rifles for $95 million? For the price the US are paying for M4’s that $95 million is 158,000 units. We are once again re-buying L85Ax. One could understand it perhaps if… Read more »

I don’t necessarily disagree with you Steve. The M4 carbine however isn’t the answer, free float forend or not, a 14.5″ barrel is not going to give satisfactory accuracy. We will probably adapot some variant (or family of variants) of the excellent short stroke piston HK416 family, chambered in a new intermediate caliber. Interestingly, when developing the 416, Hk used the short stroke gas system they developed for the L85A2 when re-working the AR platform from direct gas impringment to gas piston. As said, the expensive but sublime 416 off shoot, the M27 would be my preference. As a side… Read more »

I know there are other costs to replacing a system. Everything from manuals to racks and sundry other items. Plus training costs etc. The bulk of the cost is still is X thousand copies of something that costs Y. Out to 200m 14.5 over that we are more concerned about suppression anyway. Infantry fire is either about close in or mass not accuracy. Though I don’t mind the weight of L85Ax I have only had one for company on a couple of occasions and wasn’t carrying much more. Newer DI AR variants, even the not so clever M4, are significantly… Read more »

I don’t see calibre changing anytime soon. Every time the US looks into it, the decide against it due to excessive cost for only a marginal improvement.
The 6.5 creedmore is basically a necked down 7.62×51 so would only involve replacing the barrel of the current L129 A1. As Steve said the cost of these upgrades is no cheaper than replacing the entire rifle with M4’s which offer a significant weight advantage. The MARS LMT that NewZealand selected with 16 inch barrel and mid life gas system looks hard to beat based on whats currently available.

Nothing really beats 5.56mm at the moment. It sits at the sweet spot. I think the biggest change won’t come in calibre but in case and propellant technology. We will probably be throwing 5mm diameter rounds down range until the end of the century. I just doubt they will be launched from a brass or steel vessel containing powder ignited by a cap we know them now, Mid length and 16 inch barrel system in a conventional AR package seems to be the way to go. I like the Tavor but is it a political no-no. The Thales F90 suits… Read more »

It would be interesting to know how many riffles would be required, if they decided to switch. Regular plus reserve force is about 220k, but how many rifles that equates to would be interesting to know, taking into account spares etc. From what i could work out the SA80 costs around £4k per weapon kitted out, so 220k x 4k would give £880k even before you consider spares, training etc. Can kinda understand why they preferred to pay HK £5.4m to upgrade the existing rifles in a budget tight era. I guess the question the army had to tackle with… Read more »

The US Marine Corps is rolling out the M27 IAR for all Marines in infantry/reconnaissance platoons and certain other close combat roles, but is retaining the M4/M16 for all other personnel like engineers, clerks, Navy corpsmen (medics) etc. The US Army is considering something similar with their Next Generation Squad Automatic Rifle (NGSAR) programme, they’re looking into replacing their SAW and likely the M4 down the road with a new weapon and a new calibre, but only for those soldiers in close combat units. I don’t see why the UK can’t do the same. Really, it’s only those in the… Read more » 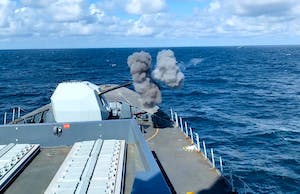