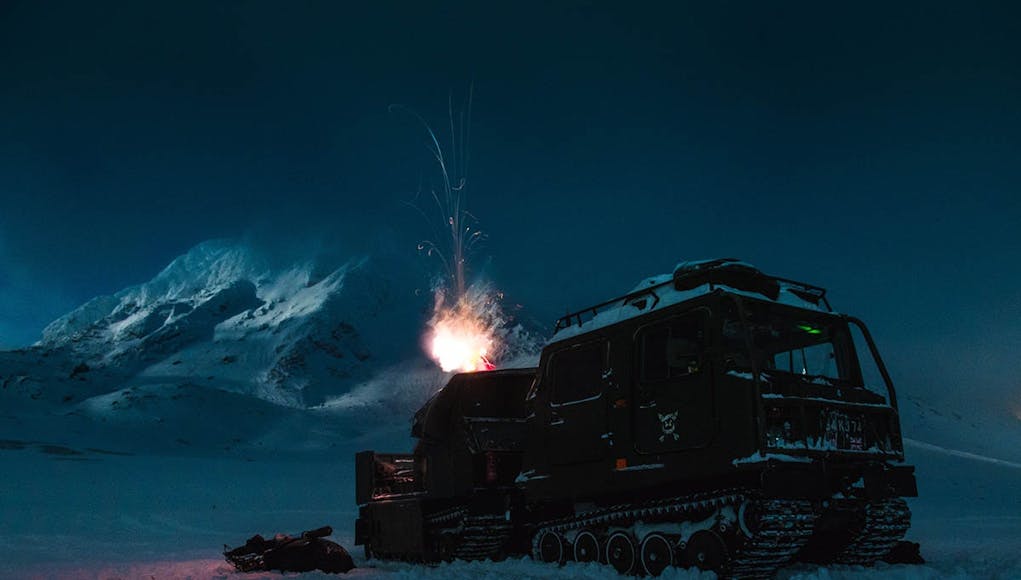 The live firing is part of the Royal Marines winter deployment inside the Arctic Circle, Exercise Aquila 19.

The Ministry of Defence say that the exercise tests all aspects of the commando’s abilities – in the air, on the water and on the ground.

“Under normal circumstances a two-man mortar team can ‘drop’ up to 30 rounds of 81mm mortar shells on enemy positions up to three miles away every minute. The weapons are carried into action on trailers attached to the marines’ all-weather, all-terrain BV tracked vehicles.

In mid-February this far north there are only eight hours of daylight; handling and firing mortars is extremely difficult with temperatures and wind chill as low as -35°C. The sections conducted several co-ordinated illumination fire missions, exercising the tactical ability of both the mortar section and mortar fire controls in the Arctic.”

“It has been an excellent opportunity to fire the 81mm mortars in the Arctic,” said 27-year-old Captain Nate Brown from Coventry who oversaw one of the shoots.

“It is brilliant to embrace an environment where the Royal Marines are known as experts globally. It is a challenging place; one like no other. If we can function and excel the harshest places it maintains our ability to operate as specialists anywhere on the planet.” The Royal Marines have committed to a ten-year training programme with their Norwegian counterparts, which will see around 1,000 Marines travelling each year.

8 hours of daylight in Feb…. How far south are they?

2 seconds to be handed a mortar bomb then to place it in the muzzle then to get the hell out of the way ! I wouldn’t do it 30 times !

Moving to quickly with things that have high potential energy leads to mistakes, mistakes lead to removal of bits.