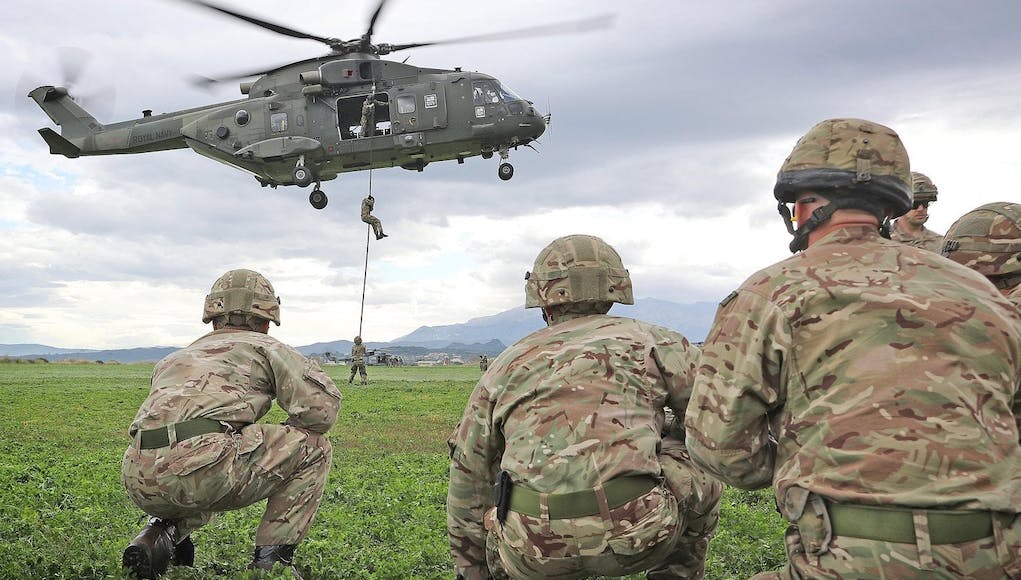 According to the MoD, the Royal Marines moved ashore by Wildcat and Merlin Mk3 helicopters during combined training with the US Marine Corps.

“Fresh from a large-scale exercise with the Turks, Ocean shifted 250 miles to the west and waters off Crete.

There the Royal Marines moved ashore by Wildcat and Merlin Mk3 helicopters during a day of combined training with the US Marine Corps’ Black Sea Rotational Force.”

The commandos were flown into Maleme airfield – in 1941, the focal point of an aerial assault by German airborne forces who paid very heavily for seizing the base.

“No such hostile reception awaited the Norton Manor men as they took a ‘leap of faith’ and fast roped from the Commando Helicopter Force aircraft.

One on the ground, the troops conducted mortar firing, honed their close-quarters battle drills and joined their US brethren in combined section attacks around Maleme, which remains a working airfield.”

“This was a good day of integration training and teaching the US Marines basic soldiering skills,” said Marine Greg Finlow. “The day was a big eye-opener on how they conduct themselves on the battlefield.”

It does beggar belief the most effective units in our military. The Royal Marines and HMS Ocean are forecast for reducing in strength (RM) or scrapping without replacement. (Ocean)

Both are undesirable.
But both are doable.
The key is the LPDs