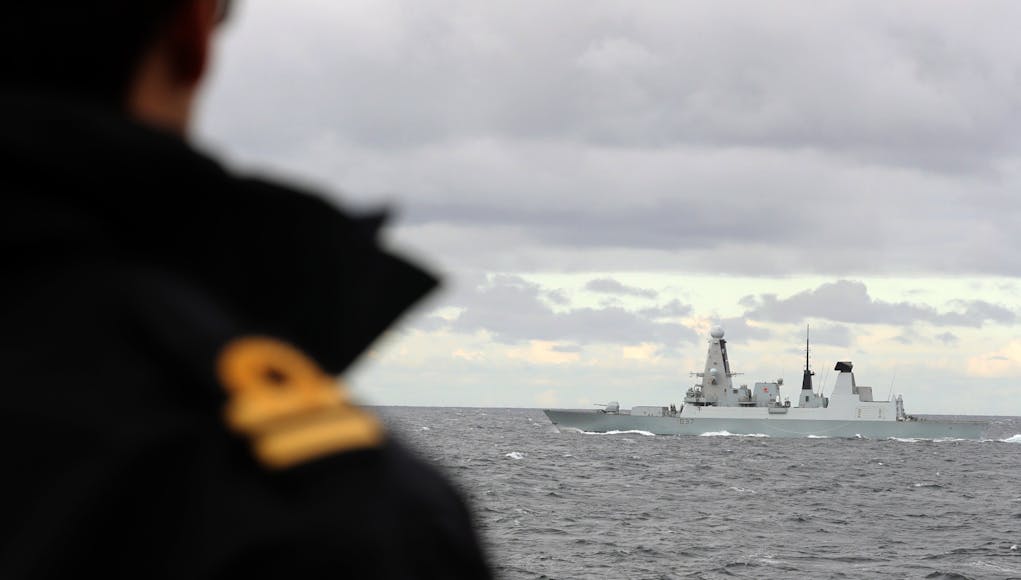 “Type 45 destroyer HMS Duncan is now flagship of a group of half a dozen warships on patrol from the Pillars of Hercules to the Black Sea.

At the same time HMS Enterprise has just taken charge of a minehunting force patrolling the very same waters.

She will lead a flotilla of minehunters dealing with the threat of present-day mines and underwater explosive devices, as well as any historic ordnance they come across from the past 100 years.”

Enterprise will initially be joined by a Turkish minehunter with vessels from Bulgaria, Greece, Italy, Romania, and the UK joining Mine Counter-measures Group 2 later in the year.

The minehunting task group will take part in a number of activities such as mine clearance exercises, maritime security patrols and regional engagement across the Mediterranean and surrounding area.

HMS Duncan is leading Standing NATO Maritime Group 2 (SNMG2) is what NATO call an ‘Immediate Reaction Force’. SNMG2 is a ‘multinational, integrated maritime force’ – made up of vessels from various allied nations, training and operating together as a single team – that is permanently available to NATO to perform a wide range of tasks, from participating in exercises to crisis response and real world operational missions.

Alsk HMS Echo is currently in the Mediterranean.

I thought HMS Enterprise was a survey ship?

She can also work effectively as a command and control ship for small MCM taskgroups like this. That was her role with migrant crisis as well.

It helps that we have Gibraltar and the Cyprus bases

This is what you get when you have too few hulls. Those remaining get overworked, doubling up on responsibilities. Just think of the West Indies Guard Ship as an example; used to be a frigate or destroyer but now is a RFA vessel. We are simply spread far too thin and it’s only going to get worse. Depressing.

HMS Enterprise is actually being used in one of the roles she was designed for.

Maybe but a Bay-Class landing ship is not a frigate or destroyer.

We have too small a Royal Navy to be the guardians of the Mediterranean sea. In the past the RN Med fleet used to compose of a fleet carrier or 2, cruisers, destroyers, frigates in their dozens. Now look at the state of the RN. 19 frigates and destroyers only (2 of which are listed as training ships as the RN has inadequate numbers of personnel to run all 19) when 26 ships is the minimum the admiralty say we need to meet current commitments and deployments. Only 7 submarines, when defence select committee and admiralty state we need at… Read more »

The politicians seemed have forgotten what happenened prior to WW 2
Britain was ill prepared for war.
They still jave not learn’t from history.

According to Navy News, there are 6 RN escort ships active at the moment, with 2 in post refit work-up: http://www.savetheroyalnavy.org/ongoing-manpower-issues-revealed-by-status-of-royal-navy-surface-escorts/

I agree with Mr bell,on this matter.the past and present government should be held to accountability,the state of our rn is an embarrassment.to us as a country,and to them poor military personnel,sailing on inept ships, lacking the right tackle &not enough sailers,or soldier’s.i think making conscription on leaving school,would strengthen our hand in the defence of the realm.isreal is a perfect example.rule brittania.

I have an idea,!
why not recommission HMS Bronington
Dual purpose submarine and mine countermeasures

Either we are clearly not as rich as we keep getting told we are, or someone is pissapropreating funds ?! The navy is, as ever, our finest and final line of defence. If history is any guide at all we must never let her down . The British are an Island race with a world wide trading heritage that we are now about to bank our entire futures on. Let’s hope our politicians wake up to this fact and invest in that future. We must protect, nurture and realise that ambition by providing a navy fit for purpose.

I just contacted my MP for the first time to ask him to lobby for higher defence spending, highlighting all the issues raised on here regularly. It will make no difference but I cannot moan on this site without trying something!