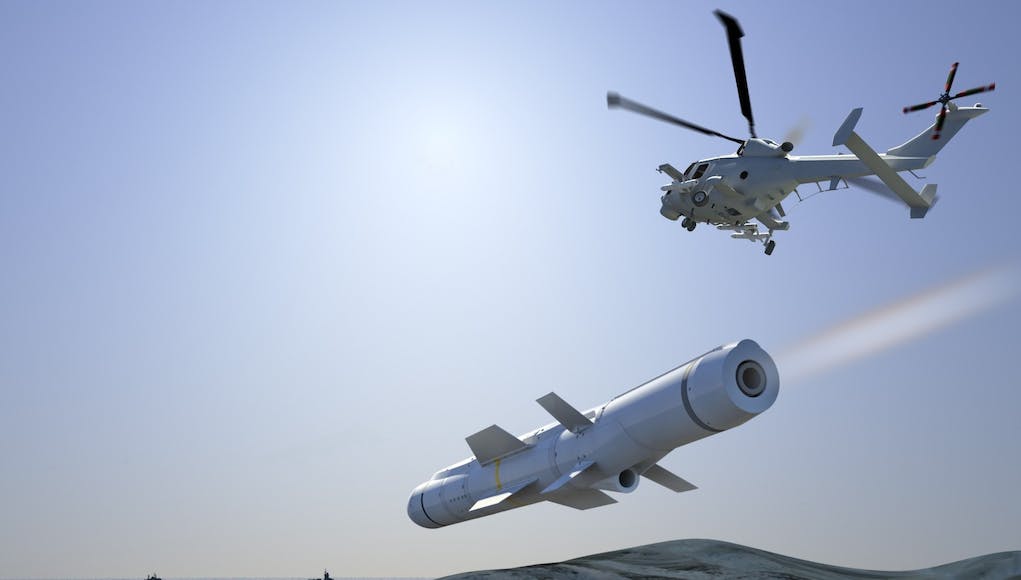 With Sea Skua now retired, Royal Navy helicopters will have no anti-ship missiles until the Sea Venom and Martlet missiles enter service in 2020.

With Lynx retiring from service at the end of March, Sea Skua is also ending its service as its not compatible with the Lynx’s successor, Wildcat.

Wildcat will receive the heavy anti-ship missile Sea Venom and the smaller Martlet to be used against small boats.

Martlet, formerly FASGW (Light), was due to enter service around 2015 on the Fleet Air Arm’s new Lynx Wildcat maritime helicopters, it still hasn’t. However the Ministry of Defence has placed an initial order for 1,000 missiles.

In 2014, the Royal Navy awarded Thales Group a £48 million contract to deliver Martlet and later that year a contract was awarded to MBDA for the Sea Venom missile for use against vessels and land targets, replacing the Sea Skua.

Both missiles are to be integrated by Leonardo (then AugustaWestland) in a single £90m programme by 2018, with initial operating capability for both planned for October 2020.

Wildcat is, according to the manufacturer, able to operate up to 20 Martlet missiles or 4 Sea Venom missiles to disable or destroy vessels up to 1000 tonnes.

As for Merlin, the helicopter has two hardpoints to carry four Sting Ray torpedoes or depth charges. Some customers of the aircraft have chosen to deploy anti-ship missiles. Indeed in 2011, the Royal Navy was considering equipping their Merlin fleet with an anti-surface missile. This was reportedly dropped due to cost.

I’ve an idea… instead of giving our money away to countries that can afford their own space programs how about we invest in our own actual security like real weapons that actually work? (It’s total NGO poppycock that the overseas aid budget helps our security. It might keep a few Sir Humphrey’s in jobs and air miles but help our national security…no! No evidence of that at all.). It is criminal negligence that Sea Skua has been removed from the Navy’s arsenal without an in service replacement. Yet more risks and ‘capability gaps’ from politicians and civil servants who aren’t… Read more »

So it would seem in till the mid 2020s we really won’t have anything of an effective navy.

There is a typo there, should read “Royal Navy now have no ability”….

I’m sure if asked the government will do the £178 billion line as if anyone believes it or their pretense that they spend 2% of GDP on defence.

The state of the Royal Navy has gone beyond appalling into the national disgrace category. Type 45 destroyers built without a strike length VLS, built with engines that don’t work in warm water, and lacking anti ship missiles (with the upcoming retirement of Harpoon) No helicopter launched ASM with the Sea Skua retirement, not to mention Wildcat helo’s that can’t electronically transfer data to their mother ship. The Type 26 frigate is massively over budget and years late. It will be built with a Mk 41 strike length VLS, but its un likely to see any missiles for it until… Read more »

makes me sick how our defence has been cut sliced diced streamlined what ever you call it,when i was serving we had equipment most was outdated but still we had it and we knew how to use it,now we have more or less nothing,not even enough to defend ourselves..as a country it,s all about cuts and savings which is fine but where the hell has all of the money from said cuts and savings gone…not to the military or nhs…it can only be to the rich or in foreign aid…the government and mod should be held to account,because i like… Read more »

The cuts went to save the economy. When you look at the % of public borrowing to GDP we are one of the highest in the world, and would have gone the way of southern europe if we hadn’t done the cuts. It had to happen, no doubt about it, but its the governments nonsense about the big equipment expenditure that winds us all up, the figure might be true but its based on expenditure over such a long period, that realistically gaps will keep coming up. We need to spend a little of the money now, but i suspect… Read more »

Steve I agree up to a point with you, we needed to do something (clearly nimrod needed put out of its misery) but the volume of UOR’s required through the last 30 years alone must have cost more than having a stable budget with a wide range of assets available. We do need to spend more and I think £52bn p.a. is the magic number required. Ultimately we need to push some work into the shipyards and dare I say it create a military vehicle factory (wales??). If we are going to have a sustainable industry. This will creat jobs,… Read more »

I think the expression is ‘penny wise and pound foolish’. Remember the flooding in northern cities and the billions in damage compared to the ‘savings’ of hundreds of millions on planned flood defences which were cancelled. The price of missiles compared to the price of the ships they protect is similar. Its brinkmanship of the worst kind and sooner or later we’ll get caught out and it won’t just be money on the line, it’ll be lives as well. You can argue cuts needed to be made but taxes can be raised just as easily. And it seems to me… Read more »

This isn’t the investment lot it’s the cut and hope lot. When we are in crisis they are easily confused. Not that Jezza or the ginger thing in yellow will do any better.

More money won’t happen when all planning is based on almost everyone else is worse and USA are our mates. VSO claiming to meet all requirements while being awesome doesn’t help either.

Big politics past and imperfect; it’s impossible to judge how things might have been if this or that hadn’t happened and also irrelevant. Today’s politicians have the choice decide how to live in the world we inhabit in 2017. Right now, in this budget the Govt can decide what next. In parts our military is the equal of any but we have a big FO problem with defence in depth and serious capability gaps which IMHO must be addressed now together with a total realignment of DFID priorities with new Brexit national interests. I am watching Mrs May or May… Read more »

” USA are our mates”

So what? They are weak and we are forced to train them due to their lack of ability meaning it’s not that.

Trump doesn’t even realise the BRITISH have had to spend on NATO defence on Europe’s behalf, NOT the USA.

Can’t even hit ISIS without bombing a Doctors Without Borders hospital instead.

So the helicopters have no anti ship capability, the few ships that do have old out dated missiles.the uk has no decent land based anti aircraft missiles,really it beggars belief

No Mark they have Sea Skua, ALL the ships that do have modern missiles…

Another capability gap that our much voiced £178 billion defence equipment plan seems to have missed. It is bordering on criminal incompetency to have a navy that cannot now sink enemy ships. Unless we are lucky enough to have one of our just 7 nuclear attack submarines handy and in the right location. Terrible situation. Why have they scrapped sea skua when replacement not in service? Why are they going to scrap harpoon next year without a replacement? Stop gap measure needed urgently. Purchase in the Norwegian ant ship missile. It is in the right weight class to be help… Read more »

With Harpoons, Sea Skuas, torpedoes or did you forget those?

” Unless we are lucky enough to have one of our just 7 nuclear attack submarines handy and in the right location.”

So all the time then Mr Bell-end? As all are at sea, in a maintenance period or conducting Perisher?

Only the US and Russia have more nuclear attack submarines silly.

I’m surprised that this capability has been allowed to erode considering that lynx helicopters armed with sea skuas were so effective in the gulf wars. Still, in similar circumstances, apaches could and would be deployed to sea. Of course, they are not strictly speaking naval helicopters. They are uk helicopters armed with air to surface missiles, though…

The top strata of the political class in the UK seems to have no interest in defence and no interest in UK hard power, this has been the case for at least 30 years if not longer and hit a nadir under the useless , in defence terms, Cameron government, a politician who could not give a monkey’s about defence and I think ‘May’ is too distracted by Brexit. I just can not understand the weak wristed attitude the UK government has developed in terms of hard power, the IRAQ and Afghan wars can in no way be described as… Read more »

If the UK Government does not want to commit the money required to finance the countries defence
requirements then they should withdraw from the UN security council and stop behaving like we have the resources to intervene in world events.