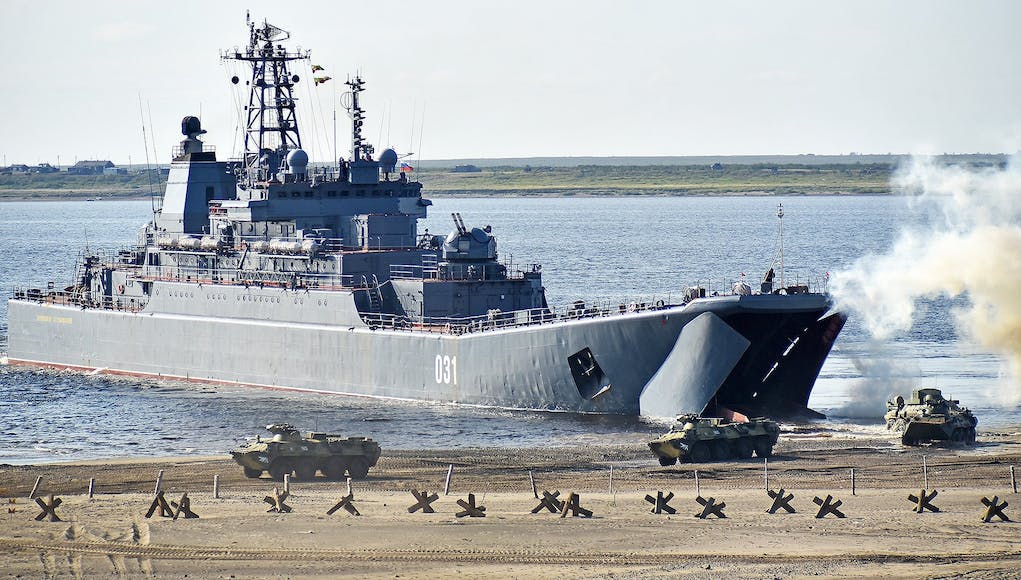 Amid ongoing tensions between Russia and Ukraine, a number of Russian amphibious assault ships have entered the Mediterranean Sea and are believed to be heading to the Black Sea.

Earlier we reported that a number of Ropucha-class landing ships and one Ivan Gren-class landing ship from the Russian Baltic fleet had passed through the English Channel. The amphibious assault flotilla is believed to be heading for the Black Sea.

The vessels have now started to enter the Mediterranean Sea. The below images were captured by David Parody, I recommend you follow him for updates on shipping in and around Gibraltar by clicking here.

They look in good nick. Baltic Fleets entire annual paint budget probably went on them. Now where they headed ? My pennyworth Odessa.

Probably right. I reckon if the balloon does go up in Ukraine it might happen within the next fortnight to three weeks.

When ? That sounds reasonable but I have no idea. Just can’t imagine an ego as fragile as Putins can just back down now.

Putin has got 4 to 5 weeks of frozen ground upon which his tanks can operate. After that the thaw (rasputitsa) sets in on the steppe meaning that all movement off metalled roads becomes impossible.

Your comments are wrong. Even in WW2 Russian tanks operated across swamps, much of their armour can still do so today. To say that they are unable to operate for several months a year is not credible.

You’re also right, but it’s just not as easy. Tanks can get stuck in mud/swamps if it’s sufficiently deep or churned up. Besides, other ancillary and support vehicles must follow. And getting the lead tank stuck in a mine-cleared drive will cause traffic to stack up…

It makes things far harder though and also makes it easier for the defenders to bog them down (quite literally) and create ambushes. Yes they could still operate in those conditions but it would be highly desirable not to do so.

Agreed and a definite change in tactics, no doubt well practiced at this time of year, A case of rather not but can if have to, as opposed to can’t.

Vityaz DT30 a very good swamp monster. Capable of handling soft ground with impunity. Russia has many others.

Those Baltic Fleet ships are two Ropucha along with the Ivan Gren-class Pyotr Morgunov. The three Northern Fleet Ropucha must be behind them. The Pyotr Morgunov was only accepted into the Fleet at the end of last year so should look in good nick. The others are some of the more valuable assets in the Russian Navy so they tend to look after them.

Their initial destination is probably Tartus, failing that Sevastapol. As things stand at the moment, with what happened in Paris, it is unlikely they will see Odessa.

I’ve never been clear in my mind at how many vessels there are. Are you saying 6? I’d read in the original reports just 3. What escorts and tugs are with them?

No escorts or tugs, just six landing craft in two groups of three.

Ivan you have a obsession’s with Russian military for a guy who claims hes from Milton Keynes lol as one poster deluded has backed you up , keep trying Ivan lol

Hi Dave, good to see you, I thought you had deserted me.

My comment about the ships is the reverse of a WarZone thread so I might be wrong. It does seem that all are now in the Med tho’ but no photos of the group of 3 Ropuchas.
Edit: spelling mistake corrected

I wonder if we have an A class in the med which can shadow and silently observe ?

Have they got tanker support ?

None reported, if fully fueled they have a range of about 6,000 miles.

Not worth sub shadowing, the USN has lots of P-8A in the Med for that job.

Silly question,, and I’m pretty sure there is a very simple answer, but exactly how do huge ships like the above make themselves water tight.

Rubber seals around the bow/stern doors I think.

Also the walls between the main hold and hull are watertight compartments to help generate buoyancy.

Yeah, I went down to the falklands on my second tour in 1983 on the Lancelot and one of the engines broke down during a storm and for some strange reason we had to go into the main hold and I can remember looking at the bulkhead at the front, thinking, if they go, we are brown bread. still haven’t a clue on how they keep the sea out

And lots of buckets watcher

A bulkhead is a wall that runs abeam or longitudinally wholly within a ship, applying it to the outer hull is misuse of the word.

The basic principle is that the doors open outward and are larger than the hole in the hull with, as Frank62 says, really good seals. Then any water or other pressure just forces to doors harder onto the hull seals. Much less of an issue at the stern but the same principle applies. Car ferries have been using these techniques for decades pretty safe apart from operator error like on the Free Enterprise.

Yes the usual tripe to try and go around the nonsense you speak , to deflect the fact that in the west the people their have the freedom to choose their leaders, in Russia they do not have that freedom.

I write a pretty factual post, nothing to do with Russia and you come back at me with that bile. Its you who has a problem not me.

But can you still answer , do the Russian people still have the freedom to choose their leader ?

As a expert on all things Russian you should know the answer Dave. Do you know how many political parties there are?, do you know who the second largest party is?

You guys are funny!

I do not see it as my role to educate you on the current Russian political system. So, please Dave do some homework yourself rather than pathetically spouting ‘past its sell by date’ propaganda. Anyway, what’s it got to do with my comment of this thread?

You really are a couple of sails short of the wind, lol

Wake up folks, Democracy is the illusion of choice. What Tory made laws have Labour rescinded, and vis versa. In the West we get to choose which ‘establishment picked’ party/leader erodes our freedoms, while serving the interests of the elites.

As Mark Twain said, ‘If voting made any difference, it wouldn’t be allowed.’

Very, have a friend who worked for Sealink at the time and was in Dover at the time, very traumatic. Many of my partner’s friends, she came from Deal, were on that ship.

My First LT Paddy got the Queens Medal for the task of recovery didn’t talk about it Johnin ,I can guess why

Something you want to drive to the depths of your mind asap.

I regard myself as really lucky not to have been there. My late father in law was Norwegian and whilst he flew Catalinas out of Woodhaven on the south side of the river from Dundee they were station at Leuchars with their Mosquito colleagues. Whilst he had a pretty boring time they didn’t and even though its once removed I can’t get some of the horrors in the sights he saw out of my head. It helped him to talk about it but my grandfather, who won a MM in WW1 never did.

Thanks Johnin seems like our Grandfather’s were from a generation who’s stoic reserve was that of the Stiff upper Lip at the time of the Great War it was all Hoorah and flag waving 4 years and 800,000 dead later returning men didn’t talk about what they’d seen and done they were not hungry for making a quick quid with stories for sale The only men who spoke would only speak too those that had been there that’s one reason why the British legion was such a pressure relief valve

We have one in Newport Pagnell, proudly on the wall is a VC where the winner got a wounded General out of gunfire at the time of the Light Brigade. Bloody Russians, never forgiven them since!

Hope we never put one of our military in the position they might earn one again.