With the awarding of the Type 31e Frigate work to Rosyth, between 2015 and 2035 yards in Scotland will launch 18 vessels of three types.

The following ships have entered service, been ordered or are currently under contract negotiation. 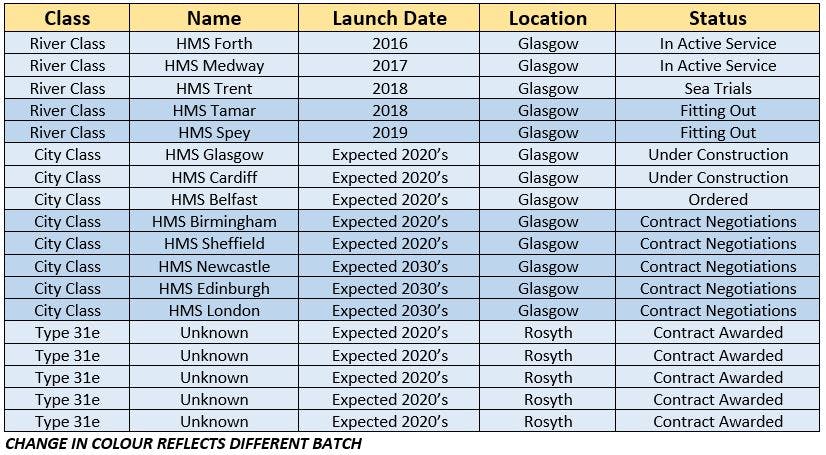 Why is this noteworthy?

There’s a lot of misunderstanding and myth circulating about how many ships the shipyards on the Clyde are expecting to build, but what’s the truth?

The chopping and changing when it comes to the requirements of the Royal Navy in terms of ship classes, numbers and even the building of those ships has caused a great deal of misunderstanding and confusion, not least when discussing Scottish politics.

Shipbuilding on the Clyde became controversial during the 2014 Scottish Independence Referendum, when the pro-union ‘Better Together’ campaign touted the planned Royal Navy order of 13 Type 26 Frigates to be built on the Clyde as a benefit of Scotland remaining in the United Kingdom.

The issue? The future composition of the Royal Navy surface fleet was changed after a defence review in 2015 resulting in five of those Type 26 Frigates being cancelled and replaced with cheaper general purpose vessels, amid cries of ‘betrayal’ but why did this happen?

You can’t call more work for more workers a ‘betrayal’ though, can you?

Why were Type 26 numbers reduced?

The initial Type 26 Frigate order had been cut back from 13 to 8 in order to fund more of the immediate spending outlined in the 2015 Strategic Defence and Security Review. As a result of Type 26 being reduced to 8 ships, it was announced that five cheaper general purpose frigates were to be designed and ordered.

Part of the reason for this is that the MoD is hoping to reduce its reliance on BAE and cut the costs of procurement by spreading shipbuilding work across civil and naval yards around the UK. To this end, the UK Government say they are implementing the results of an independent report into the National Shipbuilding Strategy by Sir John Parker which recommended that the Type 31 Frigate build be spread across the UK, with blocks and components being constructed in yards in both Scotland and England.

The National Shipbuilding Strategy was intended to be a “radical, fundamental re-appraisal of how we undertake the shipbuilding enterprise in the UK, intending to place UK naval shipbuilding on a sustainable long term footing”.

The news that BAE decided not to bid to assemble the Type 31e Frigate on the Clyde due to an apparent lack of interest created a stir in Scotland after earlier expectations that the light frigates would be built there.

However, BAE themselves say that shipbuilding capacity on the Clyde will be maxed out until the mid 2030s while the Ministry of Defence want the first of the new Type 31 Frigates in service by 2023, one of the primary reasons they have decided not to bid as prime contractor for the project, there’s no space at the BAE yards on the Clyde to do so if they are to meet the deadline for the first Type 31e to hit the water.

BAE say the move will allow them to ‘appropriately support the National Shipbuilding Strategy’ whilst ensuring the delivery of the five Offshore Patrol Vessels and the City class Type 26 frigates currently on contract, ‘to time, budget and to the highest quality standards.’

So, who is building the Type 31e Frigate and how will they be built?

Babcock will be building the vessels in Rosyth.

According to Babcock in a statement:

“Following a comprehensive competitive process, Arrowhead 140, a capable, adaptable and technology-enabled global frigate will be the UK Royal Navy’s newest class of warships, with the first ship scheduled for launch in 2023.

At its height the programme will maximise a workforce of around 1250 highly- skilled roles in multiple locations throughout the UK, with around 150 new technical apprenticeships likely to be developed. The work is expected to support an additional 1250 roles within the wider UK supply chain.

With Babcock’s Rosyth facility as the central integration site, the solution provides value for money and squarely supports the principles of the National Shipbuilding Strategy. It builds on the knowledge and expertise developed during the Queen Elizabeth aircraft carrier modular build programme.”

“It has been a tough competition and we are absolutely delighted that Arrowhead 140 has been recognised as offering the best design, build and delivery solution for the UK’s Royal Navy Type 31 frigates.

Driven by innovation and backed by experience and heritage, Arrowhead 140 is a modern warship that will meet the maritime threats of today and tomorrow, with British ingenuity and engineering at its core. It provides a flexible, adaptable platform that delivers value for money and supports the UK’s National Shipbuilding Strategy.”

Babcock say that will begin immediately following formal contract award, with detailed design work to start now and manufacture commencing in 2021 and concluding in 2027.

I wouldn’t mind Scotland being our centre for warship building, but our centre for R.F.A. shipbuilding must be an English yard. They can’t have R.F.A. on top of R.N.

Spreading the work out across all UK yards, ensures less risk and cheaper modular build costs with improved efficiencies.

Building blocks hundreds of miles apart, with the associated transport costs, does not make building ships cheaper. It makes it more expensive. That is why no successful shipbuilding country does it that way (Germany, France, Korea, Japan, China).

any factory anywhere, in the u.k, which has the facilities for heavy plate engineering should be able to tender for the production of segments of the ships. then it would be a NATIONAL SHIPBUILDING INDUSTRY. then the clyde would not be SHIPBUILDERS THEY WILL BE SHIP ASSEMBLERS! AND LUCKY ONES AT THAT.

Well Atleast we are gettin the best option for the RN. Shame they didn’t order another 5!! Even 3! 8 of each would be great.

I’D BE HAPPY IF THE TYpE 31 EVOLVES IN THE WAY THE OLD LEANDER CLASS DID.mind you 24 frigates in the class as evolving t31’s would be luvverly

Is the Goliath crane at Rosyth to be retained?

I’m pretty sure it is. It was up for sale, but apparently it will now be retained.

The World doesn’t revolve around Scottish shipyards. There are more than enough ships in the R.N and R.F.A. so that some can be built in England. Giving every single one of these to Scotland whilst many famous English shipyards have closed is disgusting, especially when we are the ones paying 90% of the cost.

We are one country Great Britain. And I agree, only if the government would order more ships to support all british yards. We have thousands of merchant ships why can’t we build some in the UK….

SHIPS DON’T HAVE TO BE BUILT IN SHIPYARDS NOWADAYS WITH MODULAR BUILDING, THE YARDS EXIST AS SHIP ASSEMBLERS, NOT BUILDERS.

HOW THE SNAIL PACED YARDS ON THE CLYDE, GET CONTRACTS IS BEYOND ME I THINK THE SHIPBUILDING INDUSTRY DECLINE IS NOT JUST POOR ENGLISH GOVERNMENT. BUT THAT THE QUALITY OF ALL THE U.K YARDS WAS JUST NOT GOOD ENOUGH

So, unless I have missed something, how does this fit with the ‘NATIONAL’ ship-building (& integration) strategy – unless the only ‘nation’ you are talking about is ‘Barnett Agreement Scotland’.? Portsmouth ceased building warships (due to the Scottish cabal at BAE shipbuilding) , even though the modern ship building hall is still there. Appledore closed (by the Scottish CEO of Babcock) and Cammell-Laird is left with what ?? This is simply nothing than less than ‘Buying a Defunct Union’ to the utter, total, detriment of a country called ENGLAND where the vast vast majority of tax-payers live. Oh and please… Read more »

So what is to happen to all these ships if Scotland had a referendum and leaves? Would we just be giving all are ship building to a foreign and unfriendly government?

That’s the problem in my eyes, because the UK ship building strategy states that we aren’t allowed to build warships outside the UK. If Scotland was to leave the UK, the work would have to be moved.

we aren’t allowed? says who? the admiralty or the mandarins at the M.O.D. ITS LIKE WHEN THE NAVY DECIDED IT ONLY WANTED NUCLEAR SUBMARINES. THE NATION SHOULD TELL THE NAVY THE GOVERNMENT WILL DECIDE WHAT YOU CAN HAVE AND NOBODY ELSE.

Rump UK and Scotland would quickly action a ‘mutual understanding over our future relationship’ based upon past longstanding accord – just like the one that is progressing so smoothly with our EU compatriots – or maybe slightly smoother.

sell them to commonwealth nations.

I was in shipbuilding formerly 40 years. The last ships i was as on we’re the two aircraft carriers. We were told years ago that if Scotland left the UK ok what will happen places like Rosyth and Glasgow which build the ships would then just become part of England the yard would become English I like Gibraltar is.

We may as well just stop calling it British shipbuilding and start calling it Scottish shipbuilding from now on, apparently they are the only shipyards and job losses that matter. Now we just need to find a way to give the R.F.A. ships to Scottish shipyards on top of every single R.N. ship. And if you disagree with this then you are the one who is being unreasonable. Apparently.

agreed its hard to imagine when you think of all the naval ships built at chatham, devonport,portsmouth, and deptford. that was when it was british shipbuilding.

You also missed Swan Hunters ship yard on the Tyne

scottish yards only get contracts as a sap to the S.N.P and unions. their production rate is abysmal at best at worst incompetent and lazy.

When T26s were cut from 13 to 8 it wasn’t Scotland that was betrayed, but the whole UK & RN. They did the same with T45s & have given us the smallest ever fleet in hundreds of years. It has imperilled the country, emboldened our enemies & handicaps our armed forces. We carry on giving billionaires sweetheart tax deals rather than collecting equitable taxes so we can fund & sustain the crews necessary for a decent balanced fleet.

One a different note, with the exception of the new HMS London, all the type 26 are named after working class cities, this not meant to sound disrespectful, far from it. Here in Australia the first type 26 is to be HMAS Hunter an industrial region around the working class city of Newcastle, perhaps the Canadians can follow suit . Then they can be called the Working Class a nice reminder to the politicians as to who really matters and where the most, and some say, the best sailors come from. I Still struggle with a ship called HMS Duncan,… Read more »

interesting that no details of firepower was announced or in fact any details about anything really other than the selected partners. Until we know what the 500m gets, we can’t judge of this is a good or terrible thing. A 3d model with spec for up to X weapons and sensors doesn’t win wars.

If you read the posts here, it’s like we just ordered a world beater.

utter hogwash! it takes them 4 years to glue a river class together a frigate will take a lot longer