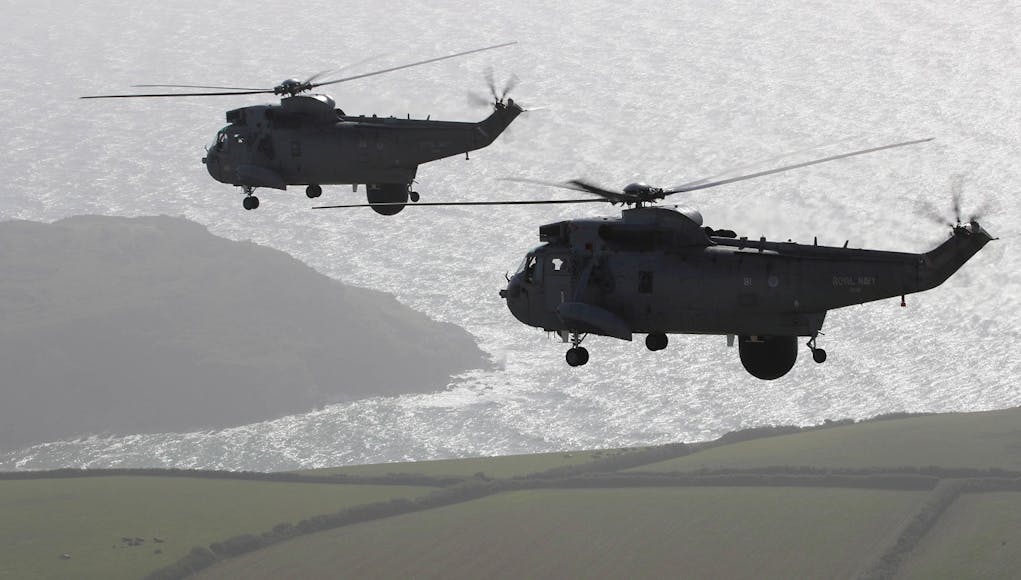 Two Sea King helicopters from 849 Naval Air Squadron flew as far east as Teignmouth, over Dartmoor and Bodmin Moor, the northern Cornish resorts of Padstow, Newquay and St Ives, before a final sight of Land’s End, Penzance, Mounts Bay and back to Culdrose.

Their flight marks the end of 49 years of active military operations by the Sea King in various roles and guises. The first of more than 140 Sea Kings built for the Royal Navy arrived at Culdrose, just three weeks after the first moon landing, say the Royal Navy in a release. According to the release:

“Since then, the helicopter has been used for anti-submarine warfare, search-and-rescue missions, general duties, carrying Royal Marines Commandos into action (which it did in the Falklands, Iraq (twice), the Balkans, Sierra Leone and Afghanistan), and provided airborne early warning and intelligence to the Fleet and ground forces. It’s in that last role – the Sea King Mk7 airborne surveillance and control – that an aircraft designed in the late 1950s flew its final mission.

It earned the ‘bagger’ tag after the Falklands conflict in 1982 when the airborne early warning variant was hurriedly introduced; the large black sack sticking out of the fuselage houses a powerful radar which scans the skies for potential threats. Those original baggers had one major flaw – they couldn’t track hostile aircraft over land, a problem rectified when the much-improved Mk7 entered service in 2001.

It proved to be a revelation. Crews found that they could not only detect aerial threats, but they could also track vehicle movements on the ground. The Mk7 proved indispensible in helping Allied forces to evade and ultimately destroy Saddam Hussein’s army around Basra and the Al Faw peninsula in 2003… and helped ground troops and police in Afghanistan arrest insurgents and seize masses of weapons and bomb-making equipment.”

Their airborne surveillance and control role will be taken over by the new Merlin Crowsnest which arrives at Culdrose next year and will operate from new carriers HMS Queen Elizabeth and HMS Prince of Wales from 2020 onwards.

Thankyou for your excellent service you big beautiful legends!

As mentioned on another thread. Another example of in service kit replacing existing. We only have 30 Merlin, which now have to cover the ASCS role too.

No doubt in MDP it will be spun as an increase.

Don’t we only have about 9 ASaC modules?

aren’t there 12 in storage that could be upgraded??

What the 8 Merlin HM1? Cannibilised someone suggested.

shame, the sea king has been a great workhorse, when i was on blake we had them in the hangar, they floated well on the odd occasion things failed.

A growing population and an increasing dependability on defence, does not equate in receiving more kit. What a strange equation formula the MOD uses for its procurements?

A great aircraft. Simple as that.

Provided tremendous service to our armed forces and the country as a whole, its a shame HMG does not replace like for like. 30 Merlins are too few and more are required. Again, start looking at the overseas aid budget and allocate some of this money in purchasing new and much-needed equipment.

To my mind, we could easily justify doubling our rotary aircraft numbers in practically every area. Imagine we went to war within the next couple of months and we required the majority of our Royal Navy to be activated simultaneously. Every ship depends on helicopter to track and prosecute submarines, to resupply at sea etc. We would be hugely short of numbers and be putting our sailors at great risk. I believe every ship should have at least 1 helicopter assigned to it, maybe more depending on the type and size of ship ie the albions and most of our… Read more »

28 Widcat for the RN replaced legacy Lynx, in one front line squadron and an OCU Squadron.

There would be enough for 1 each until you factor in the OCU, depth reserve, those in maintenance, and RFAs thst could do with helis for vertrep.

I personally think the situation regarding the Merlin Force is even worse.

Is that number 30 including the ex RAF models? I’m sure there were far more…the RAF must have donated 20 alone

Is that number 30 including the ex RAF models? I’m sure there were far more…the RAF must have donated 20 alone

No Julian. The 30 are what is left of the 44 Merlin ordered for the RN as Sea King ASW replacements. The RAF Merlin you refer to are the 25 Merlin transferred from 28 and 78 Squadrons at RAF Benson to the Commando Helicopter Force to replace the 35 odd Sea King HC4s. The RAF originally ordered 22 then another 6 were transferred sharpish thst were due to go to the Danes to help us out when we had the predictable shortfall in Afghanistan. So 3 are missing there. Crashed, spares, I don’t know. RN has 55 Merlin across the… Read more »

Those 12 are probably too far gone to be worthwhile using for active service now. Probably best to relegate them to training airframes at Culdrose (deck/firefighting training), and place an order for new airframes.

Seems ridiculous! That’s a squadrons worth. Even stripping them of kit and using to support the RFA ships would be something.

My wish would be as dedicated Crowsnest carriers of course.

Dedicated Crowsnest would be my priority. And using the remaining airframes for RFA support would work – either one for each tide, or on Argus. Branding them as dedicated ‘disaster relief’ helicopters would make for good PR too.

How are pilot numbers holding up? That’s the question. And then there is flying hours too for both pilot and air frame.