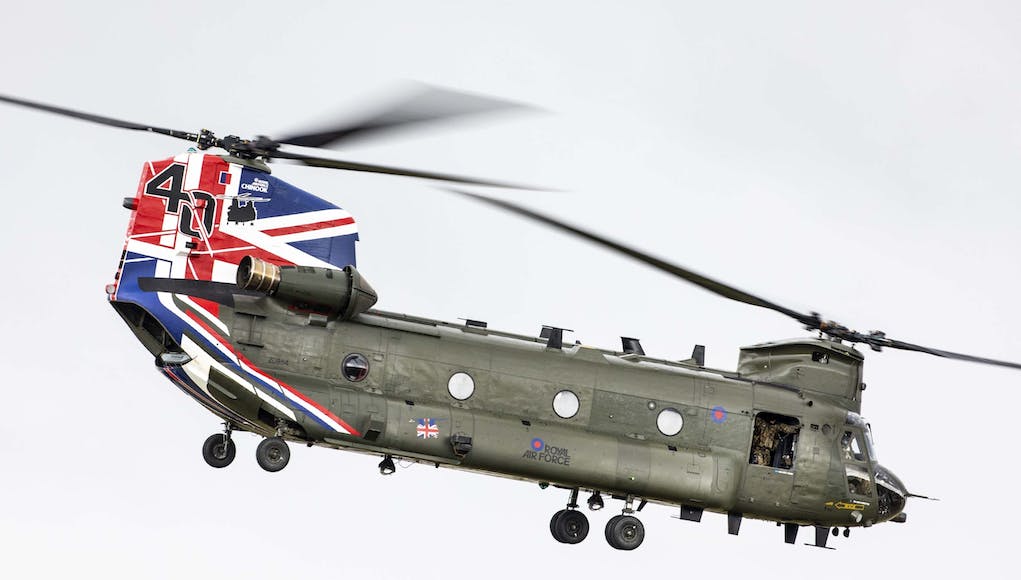 Serco has been awarded a contract extension to continue supporting the Royal Air Force with its specialist ‘Surface Finish’ aircraft painting for another three years.

“To coincide with the contract award, Serco’s Surface Finish teams based at RAF Odiham and RAF Marham have recently prepared and re-painted the tail of one of the RAF’s Chinook helicopters to celebrate the 40th anniversary of the Chinook entering service with the RAF. This helicopter will be part of the national celebration during the 2021 display season.

The special livery was designed by a Chinook pilot from RAF Odiham. The Serco team based at RAF Marham used specialist software to produce a masking outline of the final design which was then applied to the Chinook helicopter’s tail. Over several weeks, the team at RAF Odiham took approximately 300 hours to prepare the tail surface of the helicopter, apply the masking, and spray paint on the design.”

“We are delighted to be continuing to provide this vital service to the RAF for a further three years. Our Surface Finish teams operates at RAF bases across the UK where they work hard and provide a superb service to help keep the RAF’s fleet flying. I am particularly proud of the expertise the Surface Finish teams have contributed towards the celebration of the 40th anniversary of the Chinook entering service with the RAF.”

So, someone with an aero-engineering background: How important to the serviceability of an aircraft (assuming no special “stealth coatings”) is the paint job? Is it purely decorative, or is there a protective value? I remember the aluminium finish on an English Electric Lightning.

It adds a considerable amount of protection against weathering in some pretty extreme environments. Plus camouflage is still vital for survivability. And it’s pretty heavy duty stuff, you won’t find it in Homebase put it that way.

Only painting the back reminds me of a handy man visit. Did part of the job and vanished. Let’s hope it’s not a sign of their approach to the contracted work.

There’s more underneath on the belly. Normally they use a “vinyl wrap” material for anniversary designs.

Wow. About 37.5 days to prep and paint a tail. Thank goodness it wasn’t the whole Chinook. Must have been a painter transferred off the Type 26 contract.

Why? Almost no backgrounds are perfectly black so it would stand out as a negative contrast shadow in almost every situation….