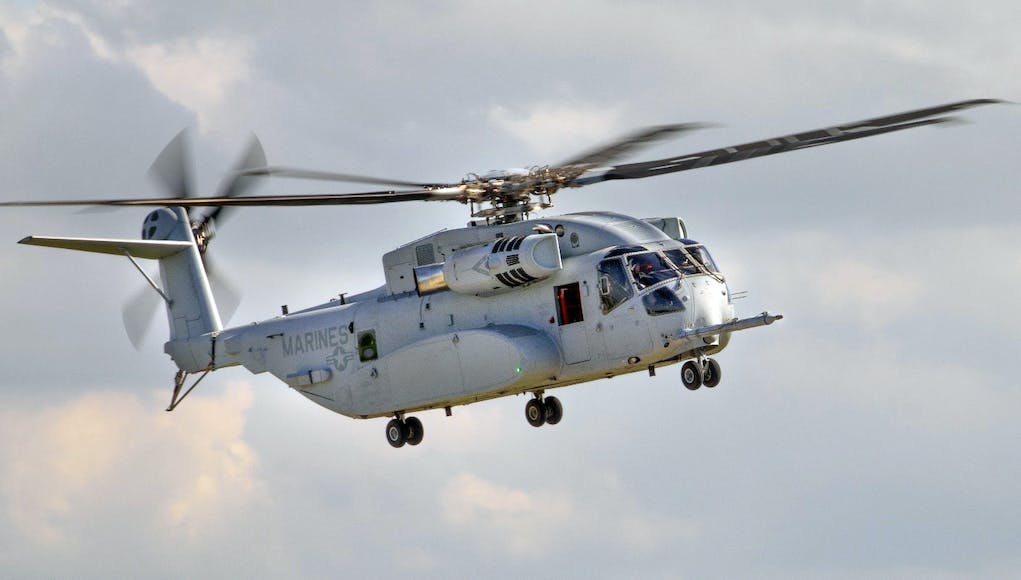 Sikorsky say it has formally responded to the German Air Force “Schwerer Transporthubschrauber” call for competition.

Sikorsky expects to offer the CH-53K King Stallion, in response to the official Request for Proposals, which is expected this summer.

The new STH heavy lifter will allow the Bundeswehr to move troops and equipment.

According to the company in a release:

“The CH-53K is the modern heavy lift solution that will provide the German Armed Forces with a safe, reliable heavy lift helicopter that can be entered into service seamlessly without need for upgrades for the next several decades. It is the only heavy lifter that will remain in production through 2032 and beyond,” said Sikorsky President Dan Schultz.

“Our strong German industry team will provide sustainment and maintenance over the next 40-50 years ensuring high-quality jobs across the country for decades to come.”

“Sikorsky is already today in close partnerships with more than 10 leading German technology companies, including the exclusive teammates Rheinmetall, MTU, Autoflug and HYDRO,” said Susanne Wiegand, Member of the Management Board, Rheinmetall Defence.

“This team is a fundamental key factor for a successful STH program, high availability rates of the helicopters and creates best added value for Germany and its industry. We are looking forward that the procurement decision will be made in favor of the CH-53K.”

This aircraft is still in development….with a multitude of problems. There may be better alternatives out there. Have a look at this flight global article.

Thanks for the link, very informative, even explained my initial reaction of”how are they going to support such an increased power source within the aircraft structure.” Already built in.

Those kings are bloody amazing beasts! I still can’t believe they can lift more than chinooks!. I wonder if you could make a “king merlin” that can lift more and carry far more than they do with bigger fuselage and engines ect, that would be cool as heck.

These aircraft would be very useful, to give the Luftwaffe eurofighters a bit of air time in an underslung load!!!!!!!

If we are playing fantasy air fleets it would be very effective to buy a batch of these for the Marines heavy lift needs. The great advantage that they have over the Chinook is that they fold, which allows much better use of deck and hangar space. The picture published a few weeks ago of QE’s hangar with one Chinook taking up the space of eight Merlins says it all, very good heavy lifter but difficult to use at sea. However, there are two chances of that happening, slim and none!

Presumably, if Boeing were to offer a re-engined Chinook, they would also offer blade folding! Especially as the article suggests that Boeing is keen to offer such an aircraft for Naval logistics.

Oh, and I’m sure if it is possible to fold the blades on a Sea Knight, then a Chinook shouldn’t pose too many problems. Take a look at the video below…all done in under 2 minutes…I think that Boeing know how to do this!

That is distinctly neat. I wonder if it could be scaled up to Chinook size? I had always understood that the cost of fitting blade folding was prohibitive , which is why the USN went for the Sikorsky option. I hadn’t thought that of course they had done it already.

Well, the economics of blade folding is an interesting topic. How many Chinooks has Boeing sold…must be thousands. How many Merlins has Leonardo sold…not that many…yet blade folding is an option. An interest by US Special forces might be a route for this to happen. And with the RAF having to replace many of its ageing Chinooks, wouldn’t an up-engined Chinook with blade folding be an attractive alternative to a standard Block 2 F model? You get a substantial increase in lift capacity, 15% better fuel consumption and, you can park a lot more in your garage. What’s not to… Read more »

Just checked messrs Wikipedia, they are somewhat out of date, the figure given is 1200 produced up until 2012, so obviously more by now. It might be interesting to see the MOD deliberations about whether to go for blade folding, and how much it might cost. Bearing in mind that the treasury rule most procurement.

I agree, I doubt that the RAF would go it alone on this one. But, the Boeing spokesman mentioned US special forces and the Brits and Aussies as operating from marine platforms. I guess that, if any of this were to happen then a number of potential customers would have to identified to make it viable. There are a lot of Chinook operators out there and blade folding is useful onshore as well…maintenance hangers etc. And if the Germans were to buy some, then they could keep them in storage without removing the blades (sorry, I couldn’t resist that one).

Or, as suggested further up this thread, they could hang some Typhoons underneath to give them some air time!!

Latest bit of news is that Israel is looking at the CH-53K as well.

Some sources saying they could end up costing $120m per aircraft. More expensive than the f35.

Yes, and I am sure that the potential upgrade of the Chinook is Boeing eyeing the market possibilities!