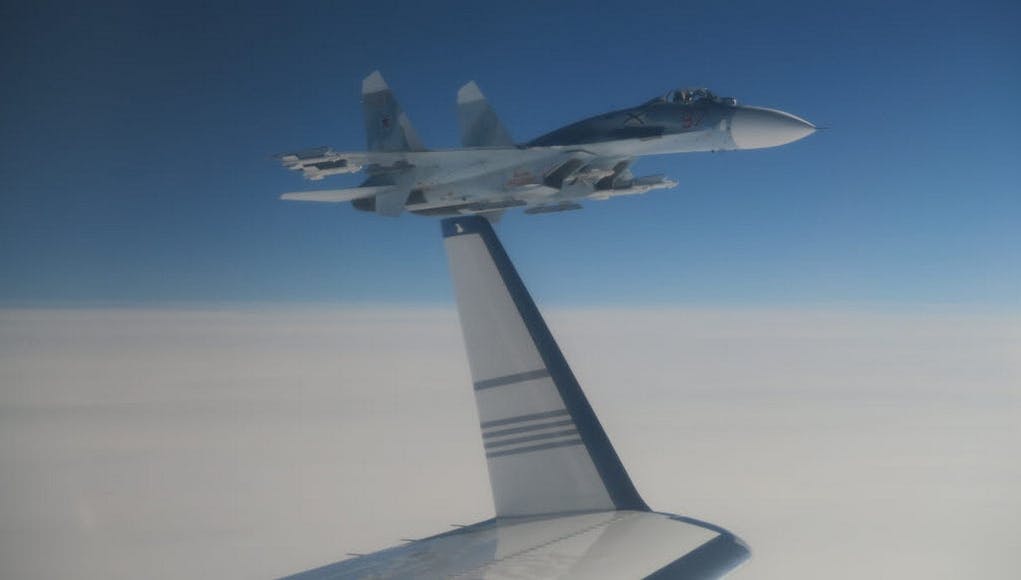 Russia’s ambassador to Sweden has been summoned to the Ministry of Foreign Affairs to explain why a Russian Navy Su-27 came within 20 metres of a Swedish military aircraft on February the 19th.

The incident occurred last Tuesday when a Swedish surveillance plane was on a routine mission over the Baltic Sea.

The Swedish aircraft is likely a Gulfstream IV that is modified with Signals intelligence (SIGINT) payloads.

According to Colonel Anders Persson in a local media report, the Russian fighter jet pilot behaved aggressively.
“First they passed from the front and they came back and positioned themselves very, very close – closer than usual.”
Persson said that the Russian SU-27 was at one point within 20 metres of his plane. He said the “offensive behaviour” was likely a signal from Russia that it did not believe the Swedish plane “should be where we were”.
The Swedish Armed Forces (Försvarsmakten) reported the incident to the government, and now the Foreign Ministry sas it wants answers.
“The Foreign Ministry views this incident as serious. The Russian plane acted in an improper and unprofessional manner in a way that jeopardized flight safety.”
0 0 vote
Article Rating

The usual reasons. Sweden was very close to NATO during the cold war – remember the sub hunts off their coast in 1981 ?

Whisky on the rocks!

Classic headline to be fair. I can still see it now.

In breach of aviation regulations for a start, to do that is clearly an aggressive act and thus a deliberate act of provocation in international Airspace. If they are trying to claim that airspace that of course would be a further provocation. Imagine what the Russian reaction would have been had any foreign aircraft come within 20 metres of one of their military aircraft. You can bet they would have seen it as provocation in the extreme. I guess we can play at semantics as to what the term ‘provocation’ covers I guess one’s political/cultural or other leanings would determine… Read more »

Because
They are fucked ruSSian bastards, that have to be vanished from Earth

It certainly how’s a worrying lack of professionalism,
20 mts is an eye blink away from disaster, all it takes is to hit a small patch of wake turbulence and both aircraft would be sat on the sea bed.

I bet the Swedish are furious and rightly so.

Where about’s was the Swedish plane I wonder?

And what is classed as international airspace? Is that 12 miles off land?

Hi Daniele, the quick answer is yes, international air space generally begins 12 nautical miles from the coast of a State. The slightly longer and better answer is that UNCLOS Article 3 provides that ‘Every State has the right to establish the breadth of its territorial sea up to a limit not exceeding 12 nautical miles, measured from the baselines determined in accordance with this this Convention.’ The link between the territoriality of the sea space and the air space is provided for by Article 2(2), which holds that ‘sovereignty extends to air space over the territorial sea as well… Read more »

Only just found your answer.

Hi Daniele, The quick answer is yes, international air space generally begins 12 nautical miles from land. The slightly longer answer is that UNCLOS Article 3 provides that ‘Every State has the right to establish the breadth of its territorial sea up to a limit not exceeding 12 nautical miles, measured from the baselines determined in accordance with this this Convention.’ The link between the territoriality of the sea space and the air space is provided for by Article 2(2), which holds that ‘sovereignty extends to air space over the territorial sea as well as to its bed and subsoil.’… Read more »

I was guessing if the Swedes have a spy plane off Kalingrad or Krondstadt no wonder the Su27’s are up.

No need for the hostile flying mind.

It’s common knowledge that Russia can do what they want, we know they will and they know they will. Sadly and boldly from our side we will have to at one stage take porportionate military action that we hope logically will make Russia back off a little and see sense, likelyhood of this ever happening is “No chance”

More likely an accident will happen ,remember the American intelligence plane that collided with a Chinese fighter and had to land in China.

Talking about Russians, and largely off topic, I would what will happen when Little Vlad cops it? Say he copped it tomorrow.

I have my own theories on this, but i’m interested in what others think.

I would hope the Russians would turn things about and come in from the cold ….

Depressingly though, I think another bad temperd bloke with a taste for the personality cult will take over and carry on driving Russia into the cold isolated wilderness.

John, Medvedev would assume leadership to begin with until elections. You have a very typical English view of Russia

John is right. I live in Russia, it’s jackboots all the way. It’s a police state through and through. Enough people fall for the personality cult every time, and it’s enough to keep pooty in power. Russians don’t know how to free themselves as they have never been free to start with. It’s just another day to them. Some 70% of the country’s wealth is in the hands of 1%. What the hell!! As for Medvedev, he probably will take over, that is if there isn’t a internal struggle between the intelligence agencies and milita, ie between the FSB and… Read more »

Just to give you an example, the Rossgvardia numbers 340,000. This is the internal military that some call Putin’s personal army. Think about that for a second.. our full time military numbers less than 140,000 at the moment, whereas their milita alone numbers 2 and half times that. If we count up the milita and security services (not including the GRU which is part of the military proper) we come to the following: Rossgvarida (Internal military) = 340,000 FSB (MI5 equivalent) = 66,200 uniformed staff and 160-200,000 border guards = upto 266,200 altogether SVR (M16 equivalent) = Unknown. There were… Read more »

I should note, having said all the above, that most Russians are just normal people going about their daily business and most are friendly. Russia is still their country, and they want to be proud of it. I tend to separate the state from the people where possible.

Bravo. I have a lot of time for the Russian people myself.

I keep getting my FSB’s and SVR’s mixed up.

Its amazing just how crappy Russian aircraft look now compared to western counter parts. The SU27 was ahead of it’s time in the 80’s but it looks increasingly dated like everything else Russia can put in the field.

With the near cancellation of Su57 they will still be flying the same crap in 20 years.

The SU27 series upto the SU 32-35 are utterly useless and a modern Grippen (let alone Typhoon or Rafale) would make mincemeat of them in a fight. Sweden is quite rightly pressing ahead with its EASR equipped radar Grippen which once matched to meteor will make the Grippen Europe’s 2nd best air to air fighter (after Eurofighter typhoon) and better than current Rafale. HMG need to get onto the ESAR radar game and order all Eurofighters to be retrofitted and a new multirole batch of 36 ordered to keep frontline RAF fighter numbers up. With UK leaving the EU it… Read more »

Mr Bell – the RAF have trained with the Indian Air Force ( Typhoon vs SU27 ) I don’t think the conclusion they drew was that the SU27 was useless,quite the opposite in fact.

It’s amazing every time the Indian air force trains with a foreign power they make great claims about how successful they were despite their vintage aircraft and yet somehow they can’t even hit a terrorist base in the face of a couple of old Pakistan F16’s.

The RAF and indeed the other arms of our military (rightly) play a staright bat over questions of who ‘won’ on these joint exercises, mostly because they consist of various scenarios, quite often tilted towards one pf the participcants favour, limiting the scope of ops and introducing unlikely ‘what if’ worst case scenarios. They are also of course. primarily about learning.

Hi Paul Yes I read the reports on the RAF exercise Vs IAF SU 27. I think however there were restrictions on the flight envelopes, angle of attack and speed placed on the Eurofighter. Also the exercise was conducted at close range eggs air to air combat less than 5 mile range. The IAF did this to limit the Eurofighter dominance and to prevent the report being the RAF blew us out of the sky using AMRAAM at 20+ miles range. The RAF agreed to the limitations as they wanted a realistic test of typhoons Vs su27 at close range.… Read more »

I would agree, depending on what the Su27/35 is armed with, let’s say the latest offerings from Russia; the Typhoon armed with Meteor and ASRAAM will have a significant range advantage. The ASRAAM is designed to engage a target beyond the target’s own IR missile range such as the Vympel R-73. This allows the Typhoon to fire and turn away whilst remaining outside the target missile’s envelope. This is doubly true for Meteor. The Su27/35 has a high radar cross section due to the number of corner reflectors a large panel gaps causing cavity resonance. Therefore it will be detected… Read more »

Yet another Russian pilot with no professionalism. Guys like this are usually the first ones to get shot down when the missiles start flying.