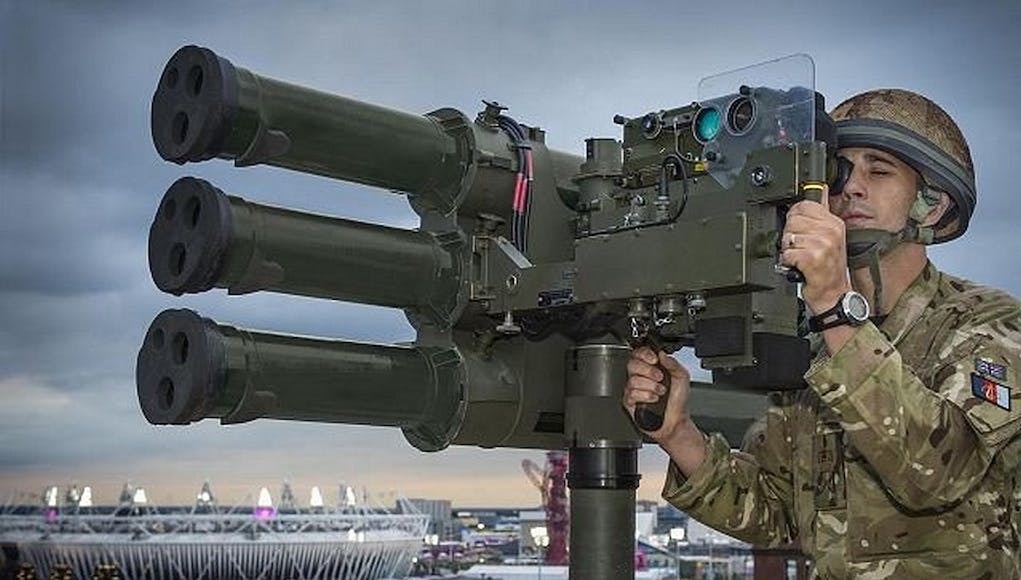 The Ministry of Defence say that SHORAD is made up of “High Velocity and Lightweight Multi-role Missile systems that can intercept air threats including fast jets, attack helicopters and unmanned air systems in a matter of seconds”.

Thales UK won the initial contract in 2018, helping to modernise and develop the missile systems as part of the Future Air Defence Availability Project (F-ADAPT).

This latest announcement confirms a five-year extension to the contract, sustaining over one hundred jobs at Thales UK’s Belfast site and within the wider Northern Ireland supply chain.

“Northern Ireland has a proud history as a world leader in defence engineering and innovation. Today’s announcement shows again the level of confidence in Northern Ireland as a great place to do business.

During these uncertain times, I am delighted that the investment of over £98-million will protect over 100 skilled jobs in Belfast. I would like to congratulate all those involved who have secured this vital investment.”

“This contract ensures the vital air defence capabilities, capable of dealing with a multitude of threats, are maintained and readily available to deploy.

The £98.4-million investment is the second major contract awarded to Northern Ireland’s defence industry in less than three months highlighting Northern Ireland’s important contribution to the delivery of our critical defence capabilities.”

I’m curious what this money actually delivers. Does it purely maintain the existing missile capability or does it include improvements to the optical tracking system, increased range, integration with future vehicles like Boxer and Ajax. Or is it just money to maintain jobs for 5 years.

If LMM was based off this missile I would like to see a lot more modularity in terms of future launchers where the navy and army could switch between the two depending on the threat.

I agree mate, it doesn’t really say anything in my opinion. I’ve got more info from reading the posts from the lads who know these systems very well.

It’s about time Starstreak (HVM) was updated so it can be used against multiple targets simultaneously rather than the current in sequence method. The twin laser mapping laser used to overlay a grid on a target is nigh on unjammable and is not affected by laser based directed countermeasures. Which compared to other IR sensor based short range air defence (SHORAD) systems is major advantage. However, it could be so much better and still be laser based and be capable of multiple simultaneous engagements, by using LIDAR as the primary tracking sensor. If a vehicle like Stormer had a four… Read more »

Daveyb
Someone said that to me when explaining a GWS 25 Engagement from initial detection on 967 to the missile hitting the target.
I’m a Gunbuster…I did stuff that goes bang and whoosh! Anything involving radars and wigglies through fan trunking ain’t simple…and that incudes lasers even though I was “forced” to learn all of that pinkie stuff t as a systems engineer !

Was that the direct path method or the predicted intercept? I unfortunately, am a bit of a geek in that department. In the last 5 years, there have been massive developments in optical solid state phase shifting, basically PESA for laser. There has been recent lab progress on multiple laser emitter digital control beam steering, which be equivalent to AESA in principle. Though the size of the beam is quite small at the moment, as they can’t handle large amounts of power. The biggest user for them is the automotive industry, where they are being used for autonomous vehicles. There… Read more »

A very thorough and interesting post there mate, top job!!

Does it work in the rain?

Amazingly, better than expected. It is down to the large optical aperture of the sensor, the exposure time (effective shutter speed) and signal processing. The larger window aperture used for digital Lidar allows light to pass around obscurants (water droplets) on the sensor window. Both human eyes and cameras have long exposure times measured in thousandths of a second. This makes water droplets appear as large streaks in an image and rain denser than it actually is. A Lidar has an ultrafast exposure time, measured in millionths of a second. Rain is effectively frozen in place during a measurement which… Read more »

Davey, I was about to say the same, you got there before me………..cough! Great stuff mate, good subject matter knowledge.

I watched a RA dude fire a Starstreak on the range in Pembry, FM its quick!

You’ll be giving your position away to every one and anyone with that method. The current method using the ADAD is purely passive and gives the enemy no warning. Given the speed of Starstreak and countermeasures having no effect thats a lot more useful.

No, that’s not entirely true. Yes the ADAD is passive to it can detect targets without them knowing it, but the method used to track the target and steer the missile towards it relies on a pair of active lasers. These draw a large grid pattern over the target. The missile looks back at the launch unit and gets steer commands depending where the missile is in relation to the grid and the vector from the launch unit. Even the manpad unit uses the lasers, so these are active. However, their field of view is very narrow and just encompasses… Read more »

A weapon system that immune to countermeasure? That would be a first in the history of weapons.

Not in the traditional sense. To make sure the missile intercepts the target, the operator must keep it optically tracked and the target needs to be illuminated by the lasers. The missile does not home on to a laser reflection off the target, like how a Paveway follows the reflection off a target from a laser designator. The two lasers paint a grid on to the target which is then used as a reference for the missile’s interception path. The only method that could be used to jam the missile, is to try and dazzle the operators optics, but these… Read more »

Facinating stuff. Are we the only people with this? Surely others (eg Russia) have similar?

I’d like to see Starstreak and LMM (same guidance?) in an 8 cell launcher combined eith ADAD and a LIDAR sensor as you describe, integrated onto Ajax/Boxer as a Stormer HVM replacement and with air to ground capability. “Starfire” I’d call it 🙂

A much more useful platform than pure SAM hence worth the expense as it fills the gap of no non-manpad ATGWs.

Neither Russia or China have a comparable system, as they prefer to use infrared guidance. However, there is another MANPAD system that uses laser beam riding and that is SAAB’s RBS70. It differs from Starstreak, in that it only uses one laser to illuminate the target. But like Starstreak it doesn’t rely on the reflection off the target, as the missile has no nose sensor. It uses the relative difference between the operator and the path of the missile to determine the steering correction sensed by a laser sensor in the missile’s tail. Much like Starstreak the operator has to… Read more »

Yes, I agree such a system would need a cannon for UAV work, not sure 40CTA is really a good choice or whether such a combination could fit on Boxer/Ajax, but yes for foeet commonality.

Interesting we seem largley unique in this capability, especially given IR has always been defeatable I’d assume Russia/China wouldnhave gone down the same route with their AD focus.

As for AT capability, fair point, I dont know Martlet’s capability vs them (I assumed it had some) although I always struggle to imagine tanks being workable after being hit by supersonic explosive projectiles!

Fantastically described there fella, a really in-depth comment that broke down how the system works…….. top job mate!!

Davey, Funny you should mention that, as I came across this the other day from MBDA: MBDA LAUNCHES SKY WARDEN C-UAS SYSTEM The Sky Warden system manages the full C-UAS kill chain from detection to neutralisation and is designed to operate both as an integrated component in a layered air defence architecture, or in a stand-alone configuration. Sky Warden can be vehicle mounted or dismounted. The modern C-UAS threat is varied, rapidly evolving, and poses a multiplying number of complex scenarios that require defending against. This means there is no single sensor or effector that can meet the modern or… Read more »

I’ve not seen this. This networking arrangement makes perfect sense, its like cooperative engagement capability, but on land. I’m not sure if a Stormer can be linked to the Sky Sabre system currently? But it would make a lot of sense to be included, as the Giraffe radar has a much longer detection range than the Stormer’s ADAD.

Is the UK going to get some sort of AD system for the future ?