A Typhoon missed a passenger aircraft by just 250ft after the civilian pilot dived to avoid it according to the UK Airprox Board.

The UK Airprox Board’s primary objective is to enhance air safety in the UK, in particular in respect of lessons to be learned and applied from Airprox occurrences reported within UK airspace.

The board carried out an inquiry and concluded the incident was the result of a late sighting by the pilot of the Jetstream and a non-sighting by the Typhoon pilot.

The investigation also found the RAF Lossiemouth-based Typhoon’s transponder was not working and the the Airprox Board has ranked the incident as a category B incident – the second most serious.

According to the report:

THE BAE JETSTREAM 41 PILOT reports that having not long passed ‘SMOKI’, Scottish Control instructed them to descend to FL060, squawk 7000 and contact Wick. They then told them of a Primary Radar contact, 10nm in their left 10 o’clock fast-moving, no height information. The Pilot Flying (PF) (the Captain) looked left but saw nothing.

The weather was good with excess of 40km visibility. PF maintained a look-out to the left whilst entering the descent using the auto-pilot. PF then saw the Typhoon, ‘ballooning’ in the window in the 9 o’clock position closing fast. PF deemed a collision was close, disconnected the auto-pilot, and pushed the nose down to increase separation.

The Typhoon’s flight path remained constant throughout; straight-and-level. Once assuredly clear of the conflict, the rate of descent was normalised, an Airprox was declared, and communications established with Wick. Both Captain and First Officer were somewhat unsettled by this event; however, the subsequent visual approach to land on RW13 was normal.

It was agreed by both pilots that they were within 250 feet +/- 50 feet separation having pushed the nose down; markings on the Typhoon were clear and no pilot’s head was seen in the canopy.
He assessed the risk of collision as ‘High’. 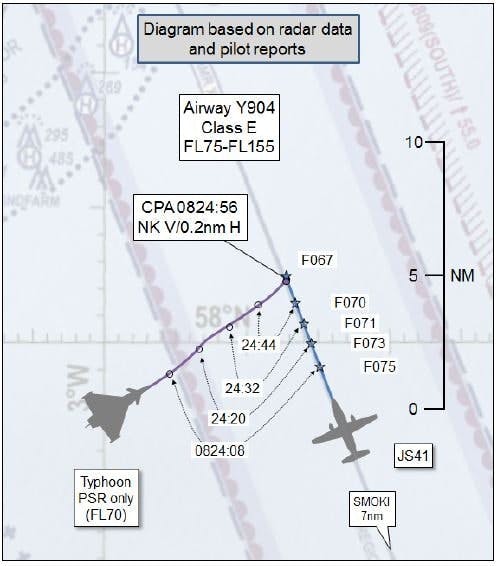 THE TYPHOON PILOT reports that his task was ‘Red Air’ No3 of a formation for a 2v1 workup sortie. He was unaware of the Airprox until informed during his in-brief after the flight. The Airprox occurred under the Y904 Airway in Class G airspace during a transit to Danger Area (D809). On departure, he was radar identified by RAF Lossiemouth Approach and given a Traffic Service. He was then handed over to Swanwick Military also with a Traffic Service. After departure from RAF Lossiemouth he levelled at FL70 and flew at 350kts until within the Danger Area. On entry to D809, Swanwick cleared him to use the Block FL50 to FL550. No traffic was called on either frequency. The Airprox had apparently occurred shortly after handover to Swanwick Military after he had flown straight-and-level for approximately 20nm. He was No3 of the 3 ship and tasked to go ahead to check the weather.

When it became evident that his transponder was not working he discussed with the Flight Lead whether they should stay as a formation. The Flight Lead had already crewed out and into the spare aircraft. The previous day the same Flight Lead and Wingman ended up using too much fuel avoiding weather and had only partially completed the task so there was a perceived imperative to send the No3 ahead to assure fuel was used wisely. They opined that he could stay VFR, it was clear skies with excellent visibility, and he would fly the short distance to D809 below the Class E Airway at FL70. With hindsight, after a further failure of his radar, this decision contributed to the Airprox; his unserviceable transponder denying the other aircraft’s TCAS warning system. Without a working radar, he was also heavily reliant on ATC to call traffic.

Because he had multiple failures, he could have upgraded his Air Traffic Service to a Deconfliction Service, which would have placed more onus on ATC to call traffic to him and possibly have avoided the Airprox. His look-out scan was also reduced because he was probably spending too long head-in trying to sort out his radar issue rather than carrying out an effective look-out scan.

It is understood that the handling of non-transponding aircraft is now included within the Swanwick controller training scenarios, and that Typhoon departures without a serviceable SSR are now not permitted other than for exceptional operational requirements.

The full report can be read here.

Typhoon pilot was like one of those people on the motorway with their head buried in his lap reading a map. Risky situation, but no harm done. Measures will have been put in place to make sure this never happens again.

Interesting combination, including controllers. As they say, these things happen, and the purpose of open frank and honest reports like the full one I quickly scanned is indeed to prevent, not punish.

From the point of view of ATC by the way, it looks like there should be more in the handover from controller to controller in the way of unusual events like a transponder not working, and a “red flag” on the display itself to draw attention to such an unusual event. It’s nearly always combinations of events cause notifiable air misses, and the solution isn’t limited to one party.

Can I just give a big shout out for the photo headlining this page?

The Typhoon is one mean looking aircraft in flight, from the front – it sends shivers down your spine!

I wouldn’t want to meet one in a dark alley!!

Cracking job done by the designers. 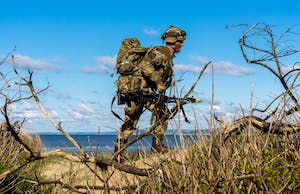