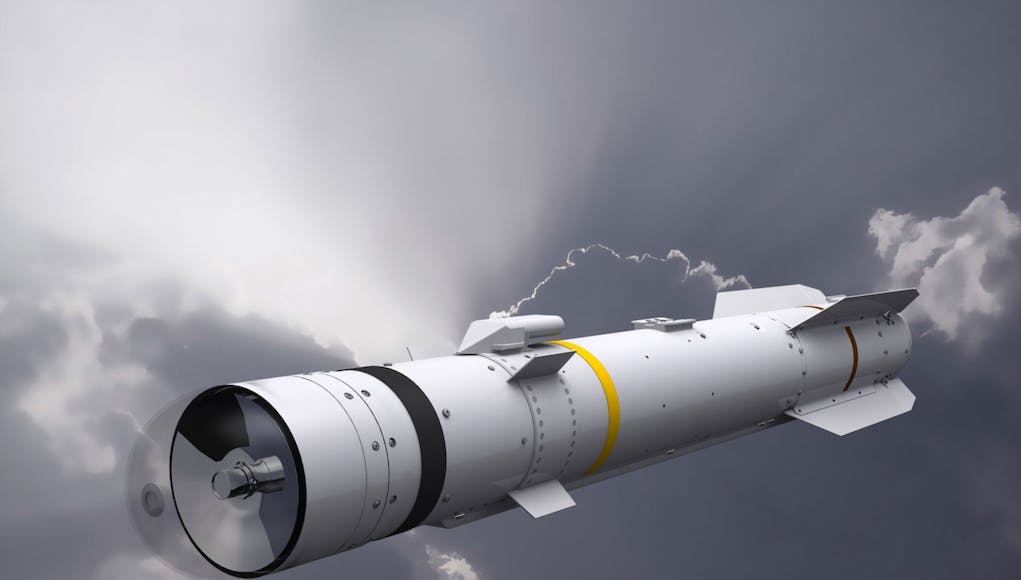 A Brimstone missile has been fired from a Typhoon jet for the first time, in the fight against Islamic State.

The Ministry of Defence say that a Typhoon was deployed to the River Euphrates on the 19th of February, where a boat used by Islamic State had been identified and was destroyed using the Brimstone missile.

The Brimstone was one of three weapons upgrades fitted onto the Typhoon last month under ‘Project Centurion’, worth £425m over the past three years. According to a release:

“This project not only enhanced the Typhoon with the precision attack missile Brimstone, but the aircraft also now has deep strike cruise missile Storm Shadow and air-to-air missile Meteor at its disposal.”

It means the jets have boosted capabilities to intercept airborne missiles and strike ground based targets, seamlessly taking over from the Tornado’s attack role as it nears retirement.

Read this story two days ago.

UKDJ Staff tend to have the Weekends Off.

In other news, A Row has broken out about how many Phalanx Systems should be fitted to the QE Class. Hopefully That will filter through to this site sometime soon.

It’s been a great source of Healthy Debate recently !

3 Phalanx is all that is needed in terms of CIWS, however I believe that there is a strong case for purchasing either RAM with the large Mk49 launcher, SeaRAM or Sea Ceptor. The RAM options are easier as it is bolt on. The main argument Ive seen against putting them on is that we havent had them before, and to that I say, so, didnt mean it was a good idea! And also that it will be part of a group, what if it isn’t? what if the destroyer is too far away? War is unpredictable, you dont know… Read more »

I consider it inconceivable that QEC would not have at least 1 ship as goalkeeper and likely more, from more than just the RN.

I dont know, what if she is sunk? What if she runs out of missiles with only 48? At the end of the day it won’t hurt to add it! There can be no unnecessary risks taken with lives and that amount of money! Its hardly expensive anyway!

Apparently Greece (amongst others of similar stays and wealth) can afford RAM but we can’t? Or have they cancelled it since.

“At the end of the day it won’t hurt to add it! There can be no unnecessary risks taken with lives and that amount of money! Its hardly expensive anyway!” Cannot argue with that Keith. For whatever reason the RN does not consider it necessary. To be fair in a sustained attack that forces several escorts to use all their SAM allocation and still has missiles getting through what use will Sea RAM do that Sea Viper, F35, Phalanx and all the rest could not stop anyway? If the money is there and there is the need then fine. Otherwise… Read more »

Sea dart wasn’t removed because of smoke on the deck. It was removed to extend the flight deck and ammunition spaces below, so we could carry more aircraft and weapons which is the carriers best form of defence. The RN also trusts the billion pound destroyer to do its job, and the very large investment in sea ceptor and sea viper missiles, and the meteor on the F35. The carrier will never be on its own, certainly if it’s been sent to conflict. By the the time it’s sent on its first operational deployment (2021) it may well have 4… Read more »

Wholeheartedly agree with this. It is lunacy for the ship not to have its own protection. All other countries seem to do it but we for some reason do not follow suit. In an age where RN ship numbers are a joke it is ever more important.

Agree with keithdwat all the way on this. Theory of sufficient escorts or weaponry is quickly shown up in combat, often at high human cost.

its not phalanx, its an adequate missile system that’s need, not just scattergun metal

always has been, always will be.

Well that’s great, I hope it took out British ISIS brides wanting to come back to the UK.

Eighteen per aircraft makes it a formidable package!

Eighteen what? Can’t work out what this is a reply to.

Oh Brimstone hell I forgot after all the QE2 stuff what this story originated as.

Typhoon has 6 pylons and these come in sets of 3 per mount so 18 total missiles… Not Bad at all considering there are still 5 hardpoints spare for a solid air-air load out.

I though Nigel meant 18 Isis brides!

In other news, whats all your opinion on the UN decision for Diego Garcia?

UN decision which is?

Sorry, being lazy, just read up on it.

The UK did treat the people there appallingly to be fair.

Great to see Typhoon reaching maturity, but Brimstone is somewhat very expensive overkill for a small boat and HMG positions.

You have the integration expensive, but that would soon be paid back with saved Brimstones.

Typhoon needs a more proportional weapon for such targets, something between the gun and Brimstone.

now lets have an update on dragonfire please

I’m led to believe Goalkeeper is superior to Phalanx and there is a question mark over Phalanx actually doing the job, when Goalkeeper’s bigger calibre will stop anything.