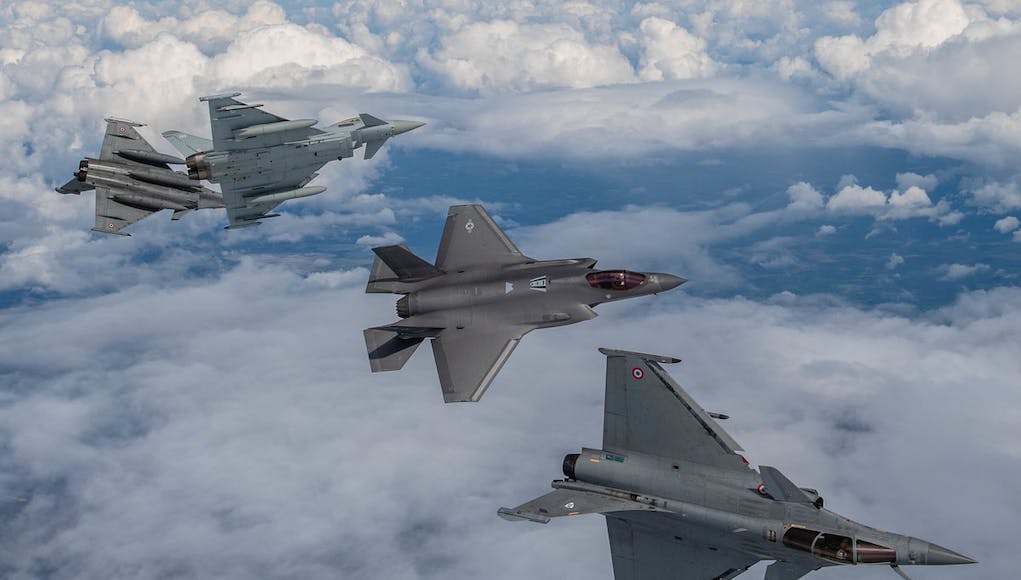 Typhoon jets of XI(F) Squadron have joined US Air Force F-35As and French Rafale fighters in the exercise.

“The Exercise is taking place over south west and central France with the Typhoons joining daily events in the sky by flying from their home base at RAF Coningsby supported by RAF Voyager Tankers from RAF Brize Norton.“

“By flying together on Exercise Atlantic Trident, the U.S.A, France and UK will be able to deliver increased effect, as we will be able to better understand each other and come together to achieve optimum interoperability.

Training together is really important because it helps us to understand the similarities of our respective air arm, the strengths of each of our fighter aircraft, and how we can work together to improve, both technologically and operationally in terms of the effect we are trying to achieve.”

“The participation of the UK’s Royal Air Force in Exercise Atlantic Trident is a reflection of the high value we place on working with and flying with our French and U.S. partners. Typhoon fighters from XI(F) Squadron and F-35B Lightnings of 617 (Dambusters) Squadron will be taking part in the exercise while Voyager tankers from 101 Squadron will provide fuel for aircraft from all three nations. The Exercise marks a milestone in RAF  history as this will be the first international exercise in which jets from the new UK aircraft carrier, HMS Queen Elizabeth will take part.”

Sounds like a good ex. Thinking about the F35B does anyone know if the main engine nozzel can be used in flight as vectored thrust?

No. It only moves when transiting into STOVL mode. It does move in STOVL mode for maneuvering and stability. 👍

No mate, fixed nozzle. It would add more cost and weight, and being more geared towards strike, it wasn’t a requirement. Plus the F35 has some pretty incredible AOA limits. It can really point the nose, and do plenty of fancy slow speed high alpha maneuvers for airshows. 👍

On that point, I wonder when an F35 will do an airshow circuit. Will one of the initial test aircraft be made available. I’m guessing it will be flat out still for the next couple of years, but even if it could do a basic fly by would be impressive enough for most.

The USAF have a F35A demo, some good videos on YouTube. I think the RAF have been practicing a basic demo, and flypast’s, but not a proper demo. I’m sure they will once more aircraft are available, and the pilot and ground crew resources are available for a dedicated display season like the Typhoon display team. 👍

Another good work up for the QE carrier wing. Will the USMC operate as a FAA airgroup or US air group?

Hi Ron. They will operate as one carrier airwing.

There seems to have been an awful lot of joint exercises in the last few weeks, and while they take months to plan I wonder if the frequency is indicative of something. This is the first time France has joined this particular anglo-american excercise.

It doesn’t mean something is going to kick off, if that’s what you are getting at. Such exercises are regular features in our sqns yearly calendar. Different nations are invited to take part, and often there own tasks and commitments determine if they can take part or not. Working together with different nations is invaluable training. And we do it as much as we can. The relationship 617 is getting from working with the USMC is priceless really.