British military personnel have taken part in the first ever exercise to train a UK-led high-readiness joint force.

According to a press release, 1600 UK personnel took part in Exercise Joint Venture at RAF St Mawgan, in Cornwall which tested the force headquarters to make sure they’re ready to deploy under the Joint Expeditionary Force (JEF).

The release continues, in this high-level exercise, personnel planned and managed military land, air and sea forces in a dynamic and demanding fictional scenario, allowing knowledge and skills to be shared and developed between JEF partner nations, which includes Denmark, Estonia, Latvia, Lithuania, the Netherlands and Norway.

“Working more closely with our partners is a key part of our plan for defence and security. That plan, backed by a rising defence budget, means more troops at readiness, operating hand in glove with our allies to deal with the threats we face.

The JEF could mean the mobilisation of 10,000 troops and future training exercises will help the force ready themselves to respond rapidly, anywhere in the world, to meet global challenges that may require a military response across the full spectrum of operations, including combat operations, humanitarian assistance and deterring threats.”

The role of the JEF headquarters – known as the Standing Joint Force Headquarters (SJFHQ) – is to coordinate efforts, and is commanded by Major General Stuart Skeates.

“Exercise Joint Venture has been a significant milestone in the delivery of the Joint Expeditionary Force. The Standing Joint Force Headquarters is proving new ground, in the way the UK and coalition partners are able to deliver real and concerted military effect in a complex and ever-changing world.

I look forward to the Standing Joint Force Headquarters playing its part in bringing the Joint Expeditionary Force to full operating capability by the end of 2018.”

Defence Secretary Michael Fallon announced the UK would take a leading role in the JEF last year, putting the UK at the spearhead of a high-readiness force that brings together seven nations. He also attended a meeting to discuss the JEF at the NATO Summit in Warsaw earlier this month. 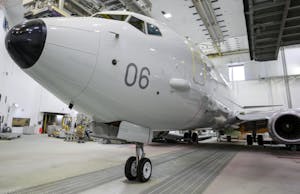 May 10, 2021
Due to be delivered to the RAF in September 2021, 'Guernsey’s Reply' is undergoing its final checks at the Boeing factory.