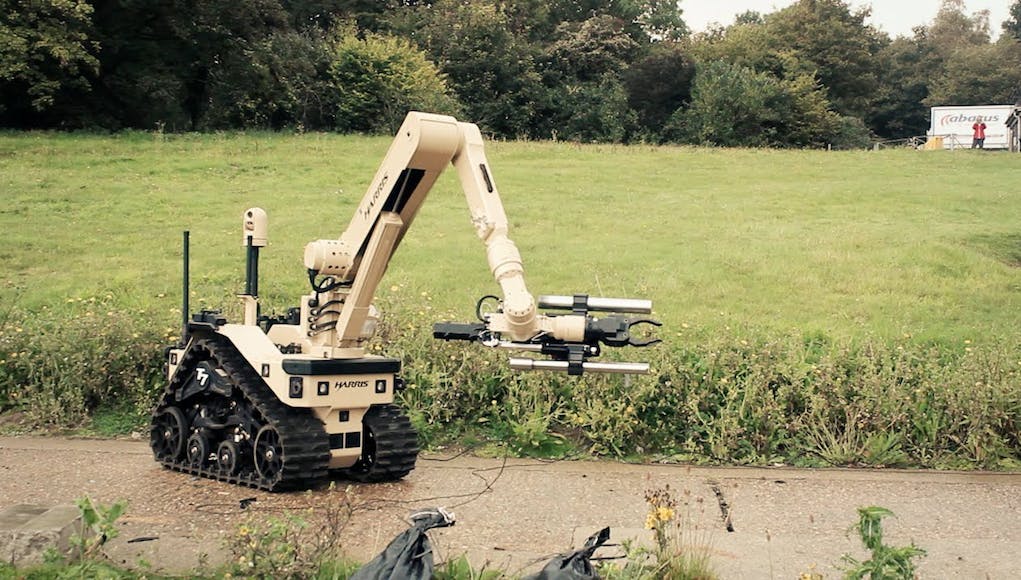 This award is an option to the £55 million contract the MoD awarded L3Harris in 2017 for T7 robotic systems for the military’s overseas EOD missions.

According to the firm, the T7 robot’s interface provides ease of use for operators and simplified command and control. The robot provides operators with increased dexterity and haptic force feedback from the robot arm to the remote-control handgrip.

“Its precision control and dexterity shorten task completion time and improve mission effectiveness, and its rugged track system provides outstanding mobility and maneuverability required for rough terrain, which uniquely positions T7 as a ready-made solution for all large EOD robot requirements around the world.

A variety of attachments enable use of standard-issue sensors, disruptors and tools that support a wide range of missions, including hazardous materials (HAZMAT) and the ability to disable and defeat improvised explosive devices (IEDs) planted inside vehicles.”

The systems will be part of the MoD’s Project STARTER and will help to defeat a wide variety of explosive threats within the U.K., including IEDs and unexploded ordnances (UXO).

“The T7 supports the demanding requirements of domestic deployed missions, including HAZMAT cleanup, EOD, intelligence, surveillance and reconnaissance (ISR) and special weapons and tactics missions. L3Harris is producing the systems at its Palm Bay, Florida factory and has established a repair depot in Brighton, U.K.”

“The exercising of this contract option reaffirms that Project STARTER program execution has gone exceptionally well and performance of the T7 systems to date are exceeding the customer’s expectations.”

A long way from the Mk7bs and Mk 8s that I used to look after!

Should be interesting when the T800s finally come on line. Will be a giant leap forward especially when linked with the Skynet Defence Network..