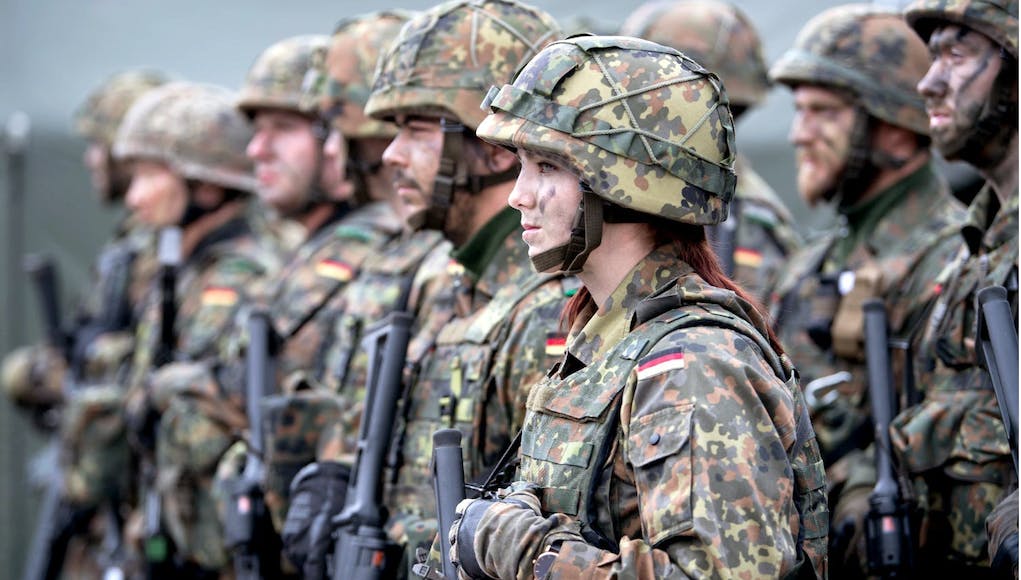 German defence ministers are seeking experts from EU countries, to compensate for the shortfall of workers in medical and IT sectors in the army.

This comes after years of under-investment and ceasing conscription in 2011 after fifty-five years.

Zorn told German publication Funke that EU citizens in uniform were to be considered, but strictly in the aforementioned specialist fields.

Deutsche Welle confirmed that 21,000 officers’ posts were unfilled. Compounding this, according to Die Zeit only a third of newly manufactured tanks, jets and helicopters are combat-ready.

Defence Minister Ursula von der Leyen said 182,000 uniformed officers were in force in the Bundeswehr. She expects this number to rise to 203,000 within 7 years, responding to criticisms from certain NATO member states of low defence spending.

Currently, the Bundeswehr does not allow foreign nationals to serve in uniform, only Germans with duel citizenship. However, there is an estimated 900 foreign citizens already in civilian roles.

This led German ombudsman, Hans-Peter Bartels, to say recruiting EU foreigners is a “normality” in the Bundeswehr.

Some EU states however have expressed reservations concerning the plans, especially in Eastern Europe.

The UK announced similar plans to recruit overseas personnel into its military in November, after a National Audit Office report stated the institution lacked 8,200 soldiers, sailors and air personnel, the worst shortage since 2010. The plans allow Commonwealth citizens to be considered for roles, even if they have not lived in the UK.

The German military sorely requires more personnel; however, motivations of politicians and the public often fail to meet at the crossroads.

Why is the German military so underfunded?

Despite Chancellor Angela Merkel’s warning that Germany can ‘no longer rely’ on traditional allies like the United States of America, stressing the need for Germany to fight in the name of Europe, many Germans are sceptical to tread this path.

This is because the shadow of history still looms large, as Germans have lost all trust in the army following Second World War atrocities against both soldiers and civilians.

West Germany’s resulting military force, the Bundeswehr (later adopted in reunified Germany), was designed purely in a defensive capacity, as enshrined into the German Basic Law.

Despite this, reunited Germany has involved itself in multiple United Nations missions in Kosovo, former Yugoslavia and Afghanistan as part of Operation Enduring Freedom.

It is clear, being Europe’s leading economy and the globe’s 4th largest, that Germany possesses the monetary means to enforce its foreign policy goals through its military. However, public opinion is strongly anti-militaristic and sceptical even towards the prospects of a common European army.

Like our forces they are under strength. We have to start paying more and making it a decent carear. That doesn’t mean everyone will become a General, it just means more can stay for longer with a good pay and a good life and health care if they stay fit and options for balancing family life and so on. It needs to be more like civi street on the “HR” front in that they are looked after, properly trained and equiped so that if push came to shove they will all come home. It’s a tough job and I admire… Read more »

What is the expected salary these days of a mid-rank soldier or sailor with 6 years service in the military does anyone know? I’m just curious to see how much it would need to increase by to actually retain personnel.

A leading hand in the Navy after 6 years will earn over 30k, more with Sea pay.

The issue is the pension benefits are huge, and it’s something young sailors/soldiers/airmen don’t value as it’s not in the bank balance each month. Combine that with other benefits like food etc, it makes comparing against the private sector not work, since the private sector gets more salary but less in benefits, significantly less in pensions.

Thanks for the info. I know 30k doesn’t go far on the south of England for a house but its well over the average salary of a 24 year old especially if they don’t have student loans not to mention the pension benefits and other perks. The issue seems to be once a lot of these guys are fully trained the private sector can offer more money due to the shortage of UK skills that the navy can’t compete on salary. Maybe we just need to get better at the conveyor belt approach mowing experiences seamen are likely to leave… Read more »

When they benchmarked independently nurses salaries it turned out that the overall package from the NHS was actually more than the private sector, but they lost nurses because the salary (up front pay) was higher in the private sector.

The military pension is better than the average civil servant one, as it accures faster, but even the normal one is worth about 100% of salary.

So if you want to benchmark compare £60k against private sector.

Merkel’s New Year message was one of the most patronising I’ve ever heard from an elected politician (and I thought he was bad, but he was just going out of his way to explain things in simple terms for 5 year old’s). Clearly doesn’t give an F what her population thinks anymore now she knows she no-longer has to seek re-election and will push the EU Globalist agent as hard as she can until she has to step down which will even allow her replacement to look more moderate. Germany is going to be a complete mess in 3 years… Read more »

BB85, Can you clarify that last sentence ?

Just had a look, Total (German) Armed Forces (Active as of October 2018) , @178,000. Though the Army appears to be very understrength at @ 62,000. I believe that the UK Army Strength Is a fair bit higher, with the RAF, Royal Navy and Royal Marines Taking the total to a similar Overall Figure. Added to that Is our actual Equipment numbers and Availability of Ships, Aircraft, Tanks and the like. When viewed in comparison, the UK Is doing pretty well especially If you take into account our Nuclear Deterrent. Of coarse though, I believe we are Terribly under strength… Read more »

I have a figure of 78,407 in my head from last year for the UK army numbers so we are sitting at well under 50% of the German army. I do accept that our navy and air force is larger but it’s still a large size gap considering how stretched we seem to be.

The German figure of 178k was for the German military as a whole, not solely the army.

Thank god the German’s don’t have military. They often invade others when they have and they do this every 40 years or so…we’re overdue for the German’s to start invading parts of Europe…maybe it’s because they now use economics and the ECB to subjugate nations rather than Stukas…

The German millitary has far more personal than the current British millitary! How the hell can that be?

Cam, Not sure about those figures, I’d be proper worried If the UK’s total active personnel amounted to half of Germany’s. (As mentioned above).

German population: 83,000,000 U.K. population: 65,000,000 So it’s not surprising they have a larger military. Also unless the U.K. is invaded, it which case our navy and air force have failed, our army is always acting in an expeditionary role. So our emphasis should be on a strong navy and Air Force, with a small but highly trained and well equipped elite army. Germany, with its land borders needs to forcus on its air force and a large army able to withstand prolonged land battles with a similar tier nation. It’s naval forces are not essential to its survival in… Read more »

The issue here is simply that there has been decades of underfunding since the imperative of maintaining a large armed forces seemed irrelevant post Glasnost.Germany is not unique in this illusory expectation,and many NATO countries defaulted on their commitment to NATO.For Germany however,a flawed immigration policy combined with a resurgent Russia has made then fear for their safety.Enemies on all sides has made them question their preparedness and examine their resources.The Bundeswejr used to be a formidable Cold War army,but it is a shadow of its former self for more than fiscal reasons.Unfortunately the narcissistic relationship between Macron and Merkel… Read more »

Like the UK issues with recruitment but more importantly retention the issue will be about pay and conditions in the armed forces Vs life in civilian roles. As Germany is now mega rich, defacto masters of Europe with all other EU countries bowing on bent knee to German Dominance there is zero reason why German citizens will get into uniform. They can earn great money working for any of Germany’s private industrial companies. BMW, BOSCH, SIEMENS, VAG group etc etc. This is the EU for you…..or the greater federal Germanic Republic. The Germans have been very clever and I admire… Read more »