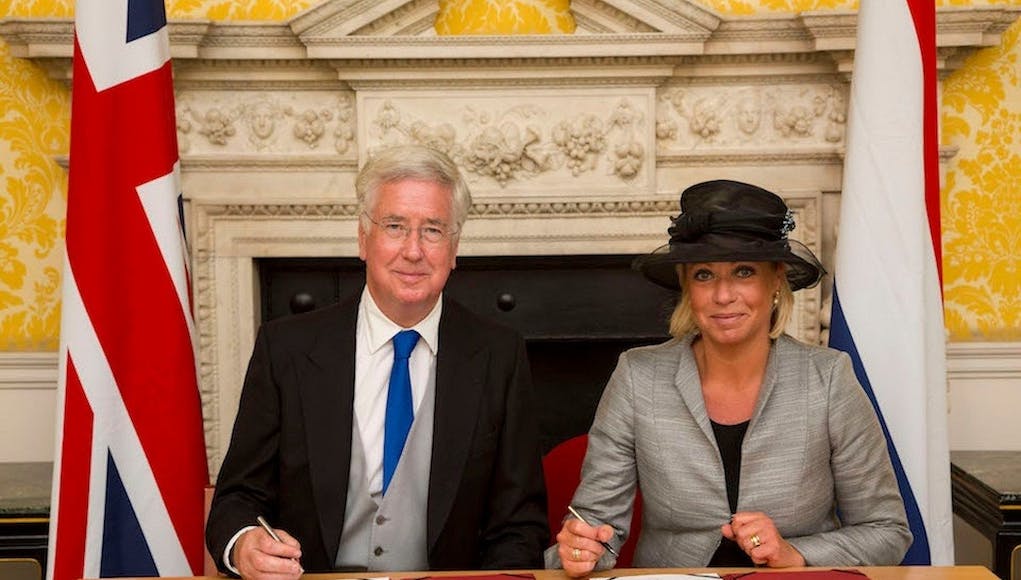 Defence Secretary Michael Fallon has met his Dutch counterpart to sign an agreement that will strengthen defence relations between the two countries.

The agreement will include a pledge to work more closely across defence and security policy, intelligence and joint exercises. It will also see the exchange of personnel and work towards a UK-Netherlands Amphibious Force.

“the UK has stepped up its relationship with the Netherlands – one of our closest and most reliable European allies. We have committed to working more closely to tackle common threats, from cyber security to terrorism, and will be united in our drive for the EU and NATO to work better together.

The UK is stepping forward not back from the global stage and will continue to defend our continent before and after Brexit.”

The Dutch have also committed a company of Marines to the UK-led NATO Very High Readiness Joint Task Force (Land) this year according to a press release.

Jeanine Hennis-Plasschaert, Minister of Defence for the Netherlands said:

“I very much value the strong military ties between the UK and the Netherlands. Clearly, our collective security is at stake, and I am convinced that we can only face today’s and tomorrow’s challenges by joining forces. We need each other more than ever. Military cooperation, either bilateral or within NATO-EU, is crucial in securing and safeguarding peace and stability at home and abroad.”

Looks like a wedding photo. aah, so in love!

LOL. I wonder what song they chose for their first dance. “Money too tight to mention” by Simply Red?

It seems we are being manouvered into a European miltary piece by piece rather than a single big, overt move.

The UK willingly signed up to the Lisbon Treaty including being part of its article 42 common defence alliance.

The above has nothing to do with the EU mind.
The Netherlands & British marines have been quasi-merged for some time

However, while the UK government of late has been obstructing the EU military alliance, the UK did sign up to it around a decade ago.

Or another more pessimistic view is that by joining our amphibious forces with Holland maybe we can cut the Royal Marines even more and decommission some of our amphibious landing ships. Maybe I am being pessimistic ? After all there is no evidence of this unspoken plan, but i think this agreement must be very worrying for the Royal Navy and Royal marines. More cutbacks coming! Damn politicians and their unagreed, undemocratic approach to defence cuts at a time when we need more investment not less.

When units merge, there are always cutbacks.

It seems to me that all of these deals are timed to remind our European cousins that they need us militarily, at a time that they are deciding on the brexit terms

Practically we don’t actually need NATO. No one is going to attack Britain, without first having to go through the whole of Europe, which would trigger them begging for help. The only time that we needed NATO was the Falklands and it wasn’t covered by the treaty. This needs to be reminded to the eastern European countries, should they decide to play hard ball with the negotiations.

The Eastern states, notably poland, have expressed strong support for Britain, they are arguably more ¨with us¨ than any of the the rest of the western states. This all has nothing to do with it though, the Dutch RM have trained with the British RM for decades in support of their NATO operations remit of defending Norway. In the ludicrously unlikely event that Russia invade Norway, or look like that are going to, it is the Dutch and British RM´s who are tasked with defending it, that and some token Norwegians. Dutch RM´s attend British RM cadres routinely have have… Read more »

Michael Fallon to continue as Secretary of State for Defence