On Tuesday 31 May, Tornados used Paveway IV guided bombs to destroy two heavy machine-guns that were threatening the advancing Iraqi forces; one, mounted on a truck concealed in a palm grove north of Fallujah, the second in a building on the southern outskirts of the city. In northern Iraq, a Typhoon and a Reaper provided assistance to the Kurdish peshmerga and Iraqi forces. The Typhoons destroyed the headquarters of a local Daesh commander to the south-east of Mosul, using Paveway IVs, while the Reaper assisted a coalition aircraft in targeting an engineering vehicle used for constructing defences near Qayyarah, then used its own Hellfire missiles against two terrorist mortar teams. Both the Typhoons and the Reaper then flew south to add their weight to air operations over Fallujah. The Typhoons successfully attacked a third heavy machine-gun position. The Reaper kept close watch on a group of terrorists test-firing and loading weapons, including a heavy machine gun, onto a supply truck. The reaper then destroyed the truck with a direct hit from a Hellfire missile.”

In March 2016, the Ministry of Defence announced that over 1,000 personnel were engaged in theater and that the Royal Air Force had conducted a total of 640 airstrikes, flying over 2,200 sorties, killing almost 1,000 IS fighters. 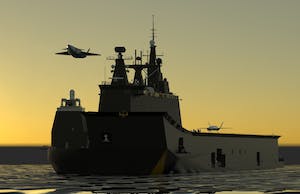 July 20, 2021
Baykar has released images of a concept unmanned jet that could operate from the Turkish helicopter carrier TCG Anadolu.