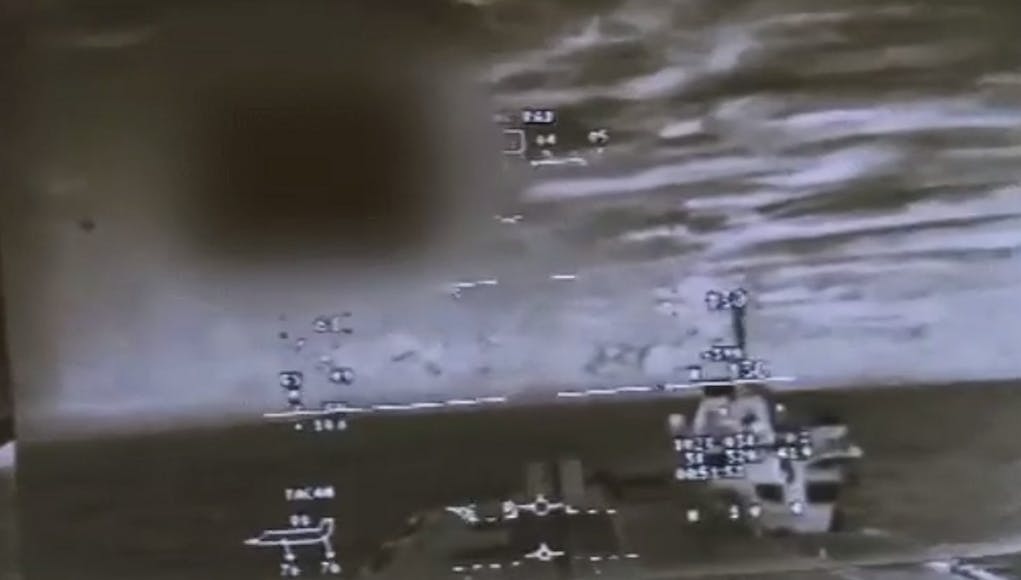 Shipborne Rolling Vertical Landing (SRVL) is a British endeavour—a capability at least a decade in the making—that will allow pilots to return to ship with more stores.

British test pilot Peter Wilson made history recently when he conducted the first ever shipborne rolling vertical landing. The Royal Navy say that previously the jets have conducted only vertical landings, hovering by the side of the ship before moving sideways over the deck and gently lowering down.

There’s a video of the first SRVL on HMS Queen Elizabeth here.

A rolling landing however requires the jet to make a more conventional landing approach, approaching the ship from behind at speed, before using thrust from its nozzle and lift created by air over the wings to touch down and gently come to a stop.

It is a process designed to land jump-jet aircraft that uses both the vertical thrust from the jet engine and lift from the wings, thus maximising the payload an aircraft can return with and stopping the financial waste that comes with dropping expensive weaponry in the sea in order to land vertically.

It can also reduce the level of wear on the lift engines and extend their operational life. Similarly, it can reduce the amount of wear upon the deck surface of a carrier caused by the downward jet exhaust from vertical landings.

All in all a money saver, do American marine assault ships use this landing no.. it’s mad chucking munitions into the ocean, why not make more powerful lift fans to cope with extra weight when landing fully armed.

Lift fan could get updated at some point in the future, new materials could increase the RPM keeping the size and weigh the same. but increase the thrust from the fan means you need more engine power to drive it. Perhaps when the P&W F135 engine gets more power we could see an upgraded fan. But SRVL may still have benefits as its ‘supposed’ to reduce stress on the fan and transmission. I’ve post before that perhaps a F35D could be possible with larger wing of the C version and a smaller fan which would allow for bigger payloads. The… Read more »

I don’t know but I can’t imagine vertical landings would be removed as an option entirely as I assume that the rolling landing would have limiting parameters whereby it might not be possible. It has taken a long time to perfect it as it states, so I can’t help but think that suggests certain limitations in its use in all conditions exist.

So how did that source get hold of the video and why wasn’t it released by the MOD first?

James Harrington
Reply to  Bloke down the pub

I wasn’t at the pub, but as soon as I saw that I thought the same… very odd

Call me paranoid, but maybe someone should be asking about the source of that video. Doesn’t look very British.

So many landing attempts! Is this HMS California…’you can check out the approaches anytime, but you can never land’!

I don’t think your paranoid, all visitors to this site should be asking the same thing.

It has been on US sites for a couple of days.

This was a clip from the tv Program Britains Real top Gun.

And in the coming days we can look forward to the start of Westlant 19 with RFA Tideforce and HMS Dragon.

No real concerns that I can see about the video. 24 mins into ITV episode 2 of “New Fighter Pilot” a couple of minutes ago and they’ve just broadcast the footage that this GIF is based on so at worst it’s ITV copyright theft a few days ahead of broadcast rather than a massive breach of the Official Secrets Act.

Haven’t caught up with that episode yet. It’d explain a lot.

I had no idea it was on at all, I just got lucky and happened to be channel surfing last week just as episode 1 was starting. I’m a bit confused by the format though, they don’t seem to be putting the number on screen to vote someone off at the end of each episode 🙂 I think the third and final episode is next week. Ep 2 was still all Hawks in UK and F-35Bs in USA. The landing-on-QE clip was pretty much as short as the GIF in this article, very incidental and just showing what the US-based… Read more »

I can see the Australians, Japanese, etc all looking to the Royal Navy to learn how to do this as they begin operating F35Bs from their helicopter carriers. Should allow the RN to increase influence with foreign friendly navies.

At the moment one of the biggest issues is with the helmet mounted display. They are trying to get the transition from normal forward flight mode to SRVL to work more seamlessly. The transition is automatic but its a case of determining when that should be – different pilots have different views.
Part of the trial this year will involve the USMC. They at present only do vertical landings, the software for SRVL is present in all F35B’s. It will be interesting to see if the do these type of landings as well.

Interesting that the USMC might use SVRL but won’t fit ski jumps to their ships – which I gather is part loss of a helicopter pad and part political.
Even if the USMC do adopt it, I guess the RN is still unique in having ski-jump take-off expertise – unless the USMC squadron stationed on the Queen Elizabeth intend to master that too?

Perhaps making the transition automatic is a step too far? Maybe have the system alert the pilot when to engage, but leave the actual switch to the pilot’s preference?

Well most nations including USA did copy British tactics and deck designs in the beginning and USA still actually use a british system on the ford class. Slanted deck, arrester wire, catapult launch. Shame we british couldn’t even get back to even using STOBAR, it’s far cheaper than CATOBAR