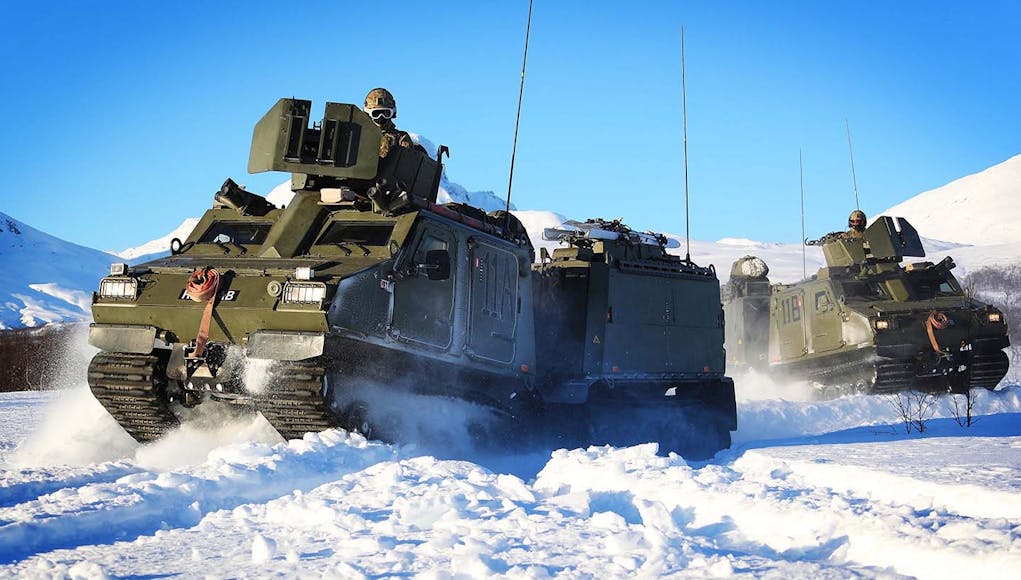 The Royal Marine commandos of Viking Squadron are teaching their American counterparts how to operate their all-terrain vehicle.

“Viking is similar to the long-serving BV tracked vehicle – except it’s armed and armoured, providing both firepower and protection for the ten Royal Marines transported in the rear cab. It also keeps them warm and spares them exhausting marches, especially in the Arctic.

For the past few weeks, the Viking Squadron have been teaching the US Marine Corps how to operate their armour under Project Odin, as the ‘Semper Fi guys’ look for a vehicle suited to such extremes as they expand their cold weather warfare capability.”

Part of that expansion has involved the commandos teaching the Americans the art of Arctic survival and combat a part of Exercise Cold Enabler according to a release. For 2nd Battalion 2nd Marines, that’s also included driver training on the Viking say the Royal Navy.

“Viking is the vehicle of choice,” explained C/Sgt Alex Hayden, in charge of the armoured training in Norway.

“It’s capable of crossing undulating deep snow, steep slopes and swimming in water, it can also be mounted with a heavy machine-gun and has white phosphorous smoke. This makes it a formidable but manoeuvrable vehicle.

Since being in the Arctic, the US Marines are realising the true benefits of this vehicle and the capability it can offer to their commanders.”

US Marine Sgt Scotty Lyall is one of those who’s received Viking training under the Royal Marines.

“The instruction has been fantastic. We don’t have a vehicle like this, and this is exactly what we need in this environment.”

The performance of the Vikings in Afghanistan was well regraded by the RM and the army
http://www.defense-aerospace.com/articles-view/release/3/86013/mod-touts-viking’s-performance-in-afghanistan.html

From the Telegraph 2009 Major Jez Hermer, a former Royal Marine who commanded the first Viking force in Afghanistan and now a consultant for STK, said because of the Viking’s small size it was “pushed to limits and beyond” in terms of adding greater protection. The Warthog, which has been extensively tested in the Middle East by the Army, has been built with a specially reinforced hull but also has the capacity for adding on another four tons of armour or other protective equipment. “We wait to see what the Taliban will do in response but when things do happen… Read more »

Viking didn’t do to well in Afghanistan, hence the purchase of Warthog vehicles from Singapore via UOR.

For the life of me I don’t understand why we have scrapped the Warthog yet retained the Viking.

it its a matter of ‘horses for courses’.

Viking is not designed for desert warfare whereas the Viking is (and vice versa).

Did anyone tell Brazil, Malaysia and Indonesia that before they purchased BVS vehicles?

Think you will find both vehicles can operate in all weather conditions.

Viking is a light vehicle designed for predominantly Arctic conditions the Warhog is similiar in oncept but much heavier and better protected with greater capacity which is why it was procured for Afganistan conditions where it was far more practical than the Viking. However for the marines specialising in arctic warfare the Viking is a far better vehicle having superior performance in those Conditions especially in soft snow and lighter. It is also a far better bet for quick reaction forces being more easily transportable in C130s. It’s horses for courses and tbh in artic conditions I would rather rely… Read more »

Well let’s just hope we don’t have another Afghanistan type operation in the future otherwise we will have to procure another set of new vehicles to do the fighting in, whilst leaving the vikings at home. Of course the warthogs were to be integrated into the main Army force, but given the nature of UOR funding the Army decided this was unaffordable. Even though the cost to the UK taxpayer was zero as they had already been purchased by the UK Treasury. The demise of the battle proven Warthog is another sad episode in the hollowing out of our defence… Read more »

Oh good so when the marines get axed we already have a customer lined up for their kit.

We can have them expensively refitted first then sell them to them at a greatly reduced cost. Maybe even give them an aid package to the same value as the sale.

Not really. Even if the RM suffer a reduction the Commando’s will still be there and so will Armoured Support Group RM.

The US DOD have posted a wee film clip of the above taking place on a skid pan. Enjoy:
https://www.instagram.com/p/BfnwYRwj7Bp/?utm_source=ig_embed&action=save

Trust the Septics to chuck their flag on one though! Cool! Not often we show them some kit of which they haven’t got 10 times more!