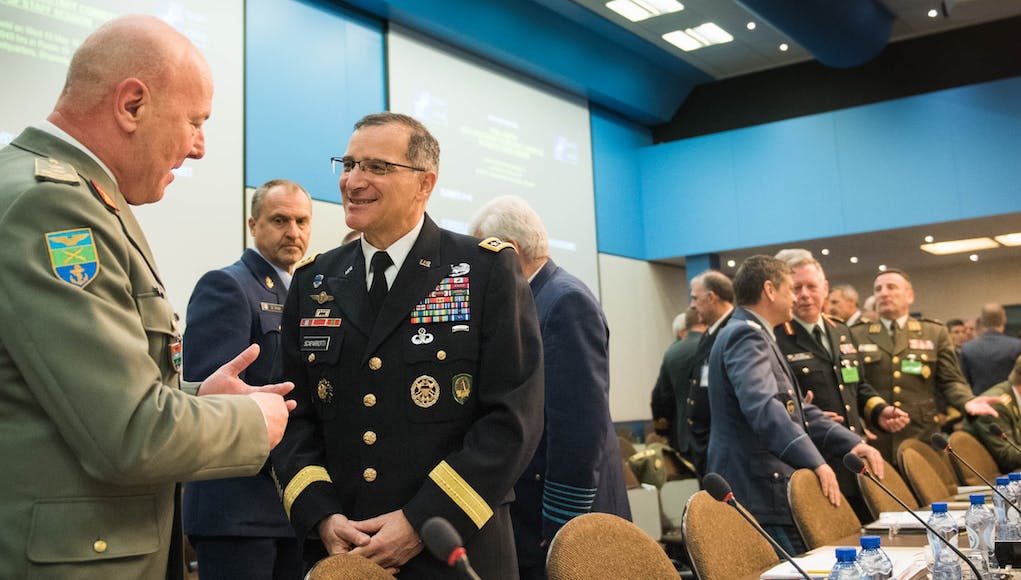 The United States and NATO are working together to counter the biggest threats to European security — violent extremism and Russian destabilisation efforts, Army Gen. Curtis M. Scaparrotti, the commander of U.S. European Command, has said.

Scaparrotti, who is dual-hatted as NATO’s supreme allied commander for Europe, appeared before the Senate Armed Services Committee to provide testimony on the state of the command and its future needs.

“Together with NATO, the U.S. has made significant progress,” he said, “but we have much work to do as we execute our National Defense Strategy, fielding an increasingly lethal, agile and resilient joint force in long-term strategic competition with Russia and ready to counter violent extremists organisations.”

The US and its allies have enhanced their presence in Europe to counter what Scaparrotti described as Russian activities aimed at exerting influence, spreading disinformation and diminishing confidence in NATO.

“Russia is carrying out a campaign of destabilization to change the international order, fracture NATO and undermine U.S. leadership around the world,” he said.

“To this end, Russia is advancing asymmetric capabilities in accordance with its concept of warfare, which envisions the employment of the full spectrum of military and nonmilitary power.”

The general said Russia’s increasingly modernized military is operating in every domain at levels not seen since the Cold War.

The United States has responded to the threat by deploying rotation forces to Europe, to include an armored brigade combat team and a combat aviation brigade.

Other actions include doubling the maritime deployments to the Black Sea, as well as theater anti-submarine warfare operations and bomber assurance and deterrence missions. Fifth generation fighters have been deployed to Europe for the first time, he said.

Interesting, but not surprising, to see no mention of China.

Folks are ignoring China’s increasing role in the world and its links to Russia. Geo-politically China and Russia now have lifelong dictatorships in all but name. Between them they have half the Eurasian landmass and 20+% of the world’s population . In both China and Russia state media and apparatus operate on grudge politics, grudges against the West. Both are playing aggressive near border spheres of influence policies, from SCS to Ukraine. There are more men under arms in China & Russia than pretty much the RoW combined. They have more nukes than the world combined. China is building the… Read more »

It seems that someone has been willing and able to use both radiological and biological weapons against civilian targets in the UK. Should we be concerned?

It is a chemical warfare attack on the streets of Britain if this doesn’t wake parliament up and start being serious about defense then we might as well give up and become a province of Russia.
Seriously enough is enough time to man up (literally) and start attacking them in whatever way hurts most sanctions cyber SF sabotage I don’t care. Time to put the fucking boot in.

Why would russia attempt to assasinate someone so obviously?

Wow. False Flag? We do it ourselves to get the HMG to finally wake up and increase defence spending against a non existent threat?

Yeah I’m all for that.

In answer to your question, maybe –

Just bumping someone off on the quiet does not send quite the same message, to traitors or to the west, as quite clearly the Russians are good at mind games and alternative forms of warfare.

Scaparroti is right- Russia is a massive threat- they do not play by the old cold war rules any more- now we face asymmetrical warfare and undermining cyber attacks, incursions into sovereign states and any and all methods to undermine NATO cohesion and solidarity, whilst utilising state sponsored terrorism to spread fear and worry throughout Europe and NATO The chemical weapon attack in Salisbury was the first ever deliberate release of a chemical weapon within the UK home territories and for this we really do need to wake up – the left-leaning Corbyn pacifists need to be put back in… Read more »

Yes that covers it all.

Its funny how Russia is developing unstoppable missiles seeing as we base ABMs in Poland. We are responsible for this just as much as them. Former Warpac countries should have been a neutral, weapons free buffer zone with assurances. The ABM treaty was allowed to lapse in 2004. We have destabilised the middle east with a war that legitimated Russia’s invasion of the Crimea Russia’s only warm water port is in the med in Syria. Add into the mix the deeply held memory of the horrors of the 2nd World War and the countless millions of Russian dead and we… Read more »