Home News The Westminster attack, what do we know? 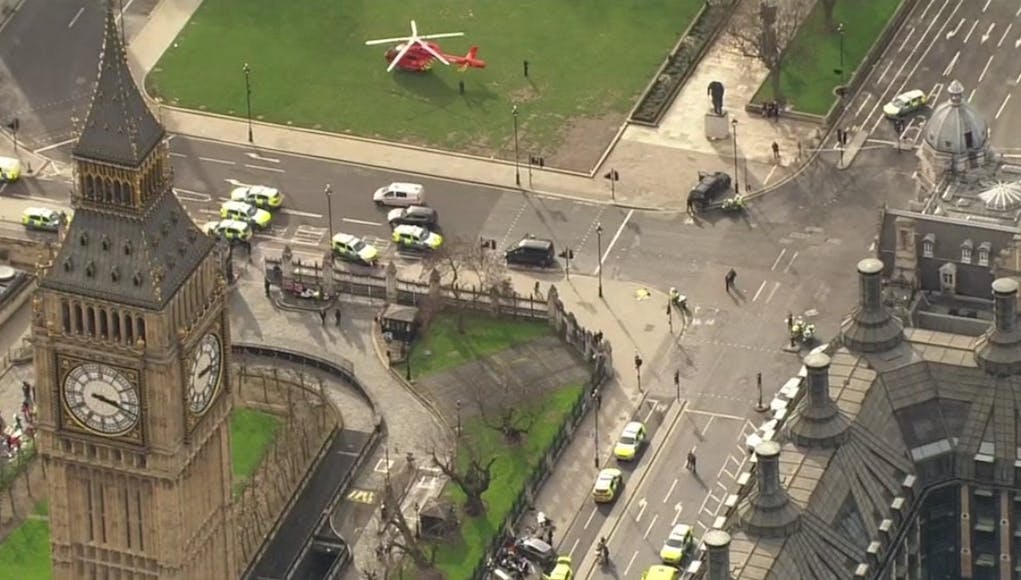 An incident has occurred in Westminster and is being treated by the Metropolitan Police as a terrorist attack.

The threat level for terrorism in the UK was already listed at “severe”, meaning an attack was “highly likely”. Shortly after the incident, additional armed police arrived.

An air ambulance from London HEMS attended the scene, and emergency services attempted to resuscitate the assailant who had been shot at least once on the left side of his chest. 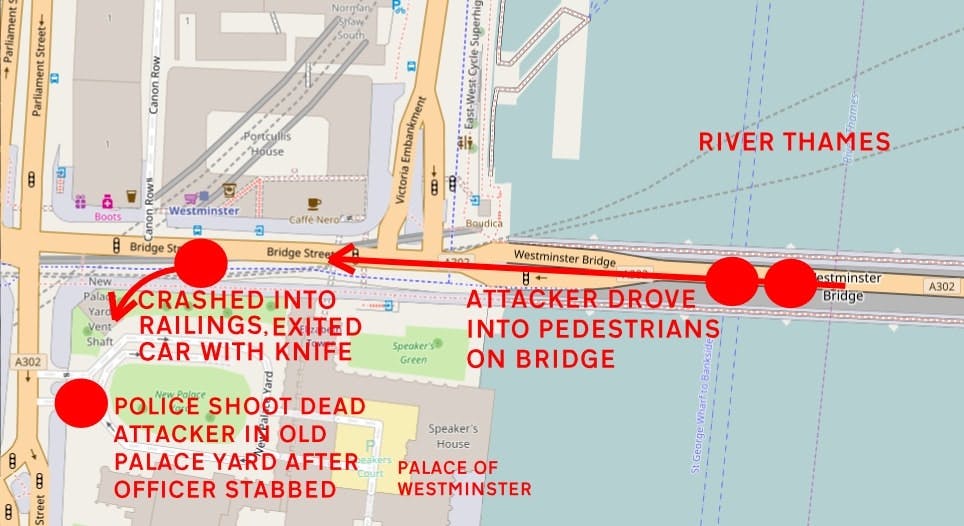 After the incident, Parliament was suspended and MPs were locked into the Commons debating chamber as a precaution, and other Parliamentary staff were told to remain in their offices. In addition, all visitors to Parliament, including journalists and several school trips, were ordered to remain in the building as well. All were later evacuated to Westminster Abbey.

At 23:00 on 22 March, West Midlands Police raided a flat in Birmingham. A witness claimed that it was the home of the perpetrator of the attack. By the morning of 23 March, six addresses had been raided and eight people arrested.

Four people were killed as a result of the incident, as well as the perpetrator, and at least 40 people were injured.

Keith Palmer, 48, an on-duty police officer assigned to the Parliamentary and Diplomatic Protection command, was stabbed and subsequently died from his injuries.

Injured members of the public were taken to St Thomas’ Hospital, which is located immediately across Westminster Bridge in Lambeth, and to King’s College Hospital, which declared a ‘major incident’ in its designated trauma centre, St Mary’s Hospital, the Royal London Hospital and the Chelsea and Westminster Hospital. A woman with serious injuries, who was rescued from the River Thames, is believed to have either fallen from the bridge or jumped off to evade the attacker.

A group of French students aged 15–16, from Concarneau in Brittany, were among those injured. Others included three police officers who were returning from a commendation ceremony, two Romanian citizens, and four students from Edge Hill University in northern England.

“Police were called at approx 2:40pm to reports of an incident at Westminster Bridge. Being treated as a firearms incident – police on scene.”

A spokesman added that “a full counter-terrorism investigation underway” and asked the public to avoid the area and asked that any members of public in the area send them images of the incident.

I’m sure it was an evangelical Christian… It always is their fault.

He ran all the way around the corner after the noise of crashing the car, and stabbed the unarmed (heroic) officer multiple times.

Lots of other people were also running in the same direction. How could the Police tell him from any other bystander until he actually entered the courtyard.

ISIS have claimed this, but then wouldn’t they claim anything that attacks the west? This guys attack is pretty lame at best. Two guys in a taxi could come up with a stronger plan to attack Westminster, I really can’t see this as any strategic thinking on behalf of dead bad guy. We have deceased, we have injured and Britain is thinking of them this week, but to make, to elevate this attack to “terrorist” level is promoting some lone wolf guy way beyond his station. If ISIS were going to deploy a soldier on a one way mission, they… Read more »

Me ole' Chum
Reply to  Aaron

He was on the ‘radicalised list’ so can conclude he was at the very least ISIS aligned. That’s not to say that ISIS gave him the green light for the attack and/or organised it. Your summary is very simplistic but not particularly wrong. ISIS have a network of sleeper cells and agents operating in the shadows, ‘radicalising’ individuals’. This is where the war is fought and why we rarely see the battle. Its that act of radicalising individuals, who set out their own plans of this scale that ISIS knows is hard to stop hence why we’re seeing an increase… Read more »

The media always seem to rush to “lone wolf”….

Mi5 are monitoring several thousands islamists in Britain every single day…. the idea of them all being lone doggies is implausible.

Orbex to launch Swiss nanosatellites from UK spaceport in Scotland