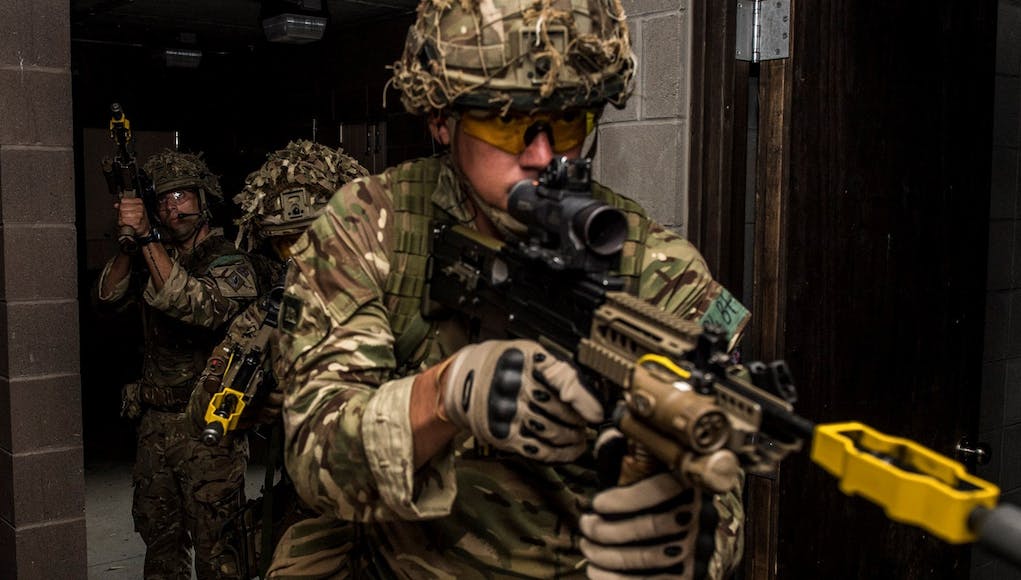 The exercise is known for being the US’s largest annual multinational live fire event.

According to the British Army, approximately 120 Reservists from across the Kent and Sussex area have put their civilian jobs aside for their annual two weeks training exercise which has been greatly welcomed and provides an ideal opportunity to develop skillsets and broaden individual experiences. The exercise is providing readiness training opportunities for all forces involved.

“British and American troops have been exercising together, building strong bonds, developing their interoperability skills and training to remain combat ready and adaptable. They have been practising some essential skills, which have included operating in built up areas (OBUA training), a shoot house – a purpose built training establishment for live firing tactical training inside buildings, patrolling, training for their battalion specialist patrol and reconnaissance teams and cultural familiarity and adventurous training.”

“It’s been great to see from the first day of our arrival, the level of engagement between the two forces. Both are very keen to find out the differences and the levels at which they both operate. This is a great opportunity for the Battalion and one we are certainly keen to sustain.”

A pity we are only sending a company or does the CO not actually realise what a battalion comprises?. Another half arsed effort. Couldn’t another reserve company be found from somewhere to bolster the numbers? A pimple on a pigs behind is what the British army has become. 4 tanks here, a platoon there, and maybe 40 or 60 paras jumping out of 1 herc. £38bn just doesn’t cut it really. Does it?

These soldiers are all reservists (full time civilian job) which means that I would assume many didn’t find the time to take weeks out of their job for a two week training jaunt across the pond. In a time of war the whole battalion could be mobilised but when were at peace there’s no point in sending an entire battalion when these men all have other careers on the side and may not wish to go when there are other training opportunities to be had closer to home.

Furthermore it should also be noted that the army is preparing to deploy some 5,000 troops to Oman in the autumn (plus hundreds of assorted vehicles) which to me at least shows the army is ‘cutting it’. Final point is that since it was a US exercise they might have only had space for/asked for a single company. We cant force troops to train in the US when the US don’t want them.

Are we planning on invading Yemen? Why so many assests being sent to a peaceful country bordering one embroiled in a middle eastern conflict?

James – apologies for not mentioning that. Its all for an large scale exercise with Oman called ‘Swift Sword 3’.

Oman is our closest ally in the Middle East . It’s where our carriers will be based when they’re in the Indian Ocean. That’s why we regularly (well kind of) train with them.

James there was a Swift Sword in 2001 I recall and possibly others since, don’t recall?

Oman is a major UK ally and the exercise tests the Uk ability to deploy the JRRF or whatever it is called this week.

Multiple Company on Company exercises is what the base was built for. That along with a artillery range and a relatively new 10 mile long IED/convoy training range. Grayling is a large base for the Guard but the bases capable of Battalion level all the way up to Brigade level and Division level exercises are Ft. Bliss, Fort Hood, Fort Benning and Twentynine Palms. Camp Grayling would have to shutdown normal operations to long if to many personnel came for the exercise. Since they are running some kind training almost everyday there’s no snow on the ground they can’t afford… Read more »