Members of 3 Rifles travelled across Romania, from the coast to the capital, on the way to Exercise Noble Jump.

Continuing the journey made from a port on the coast of Romania to Bucharest, 3 Rifles and attachments are pictured here driving their convoys of JACKALS, SV Man Trucks, Land Rovers, PFA and more the eight hours from CSC Bucharest to Cincu Training area in Central Romania. 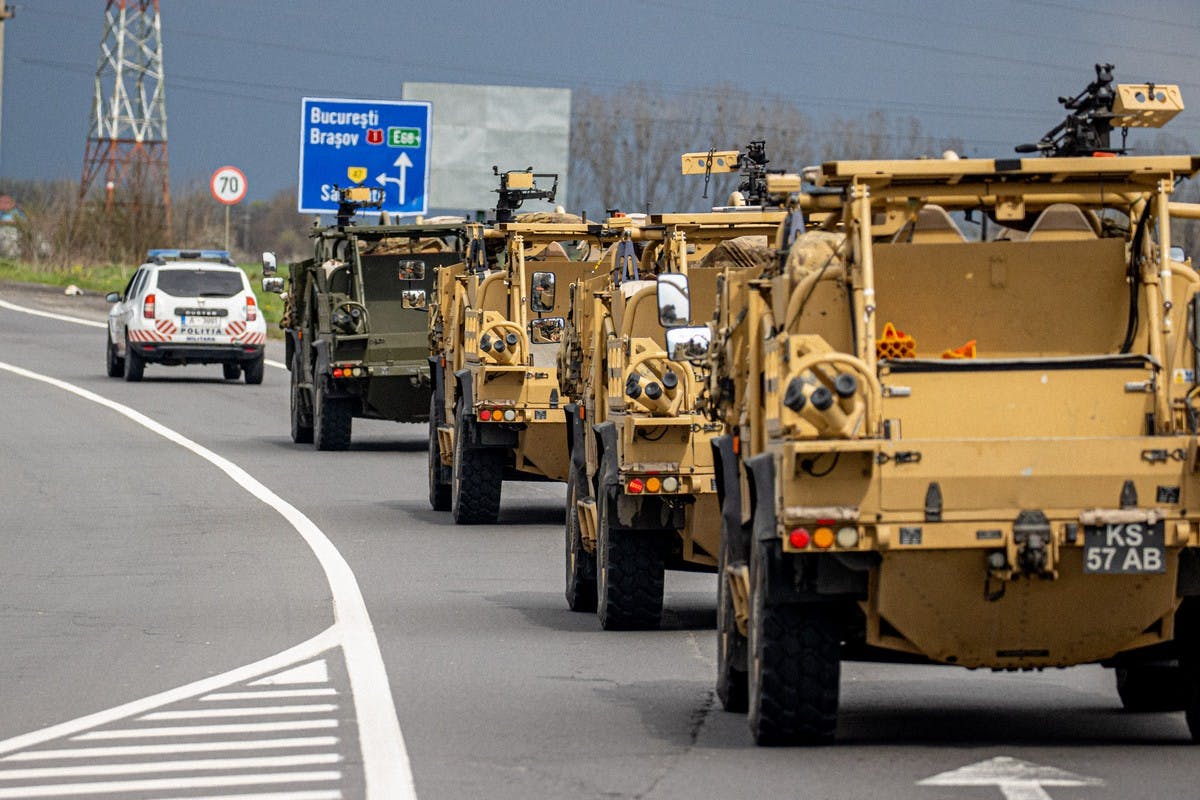 This placed the 3 Rifles forces in place ready to begin Exercise Noble Jump.

The 3rd Battalion the Rifles (3 RIFLES) are deployed on Exercise NOBLE JUMP in Romania, which is part of a wider exercise called Exercise Defender 21. The Support and Headquarters Companies of 3 RIFLES are at Cincu Training Area, Romania, to partner with the UK’s NATO Allies.”

The British Army say that 3 RIFLES are working alongside the 66th Turkish Brigade, as well as elements of the Italian and US Armies.

“The Exercise will see the soldiers of different nationalities conduct interoperability training together, as well as live fire ranges. Despite COVID restrictions, the Army is still conducting demanding training overseas, with covid 19 precautions in place. All personnel deployed had to have proof of a negative PCR covid test 72 hours before deployment.”

3 rifles and the Turkish 66th brigade are both core units in NATO’s Turkish-lead VJTF for 2021. I am therefore surprised that these exercises did not take place last year to ensure the two units could work together before taking on the VJTF role.

Maybe it is just another covid effect, but let’s hope the VJTF is not called upon until this exercise if finished.

Are we so short of funding we can’t afford green paint?

You beat me to it. UK MOD always bragging about the size of it’s budget yet they head to Romania as if it is the Sahara, SMH.

Why paint wagons different colors for exercise? Your practicing skills, drills, TTPs etc and therefore wagon color is irrelevant. On live fire field firing you have range staff cutting about in luminous vests and lads marked up with cylumes at night, doesn’t matter, the field firing is what’s important! To repaint wagons every time for exercise would be an inexcusable waste of money.

“Why paint wagons different colors for exercise?” Penty of reasons, though it does depend upon the exercise aims. Live firing exercises are completely different – they are skills-training, not tactics per se, and the luminous vests are seen as essential for safety during training. If these vehicles are for a real exercise (as opposed to a bit of defence-diplomacy – which, for all I know, this might be, although NATO’s own website says the exercise aim is to “conduct tactical maneuvers“), then the ability to hide and conceal them when tactically necessary is important, and being painted yellow might not… Read more »

I’m totally aware of the ability to paint wagons at last moment, as I to have done that at a number of times in my 29 years in uniform, however I repeat my initial point, it’s not necessary for the vast majority of exercises, as it’s a waste of time and money to rush about doing crap paint jobs at Company level. You can carry out ALL types of tactics even putting up the green cam net, over a desert vehicle, as it’s the training that’s the aim. You can move tactically, use the ground, fire and move in a… Read more »

It always used to be that wagons were green or green/black and exceptionally only painted sand if they went to the desert. We finished with desert shenanigans some years ago (out (mainly) of Iraq in May 2011, Afghan in Dec 2014), so why are they still sand colour?

Simple really, most light role deployable forces are expected to go back to the various sand pits on occasion, waste of money to repaint to green, TTPs can be carried out in any coloured vehicle and whole fleet management may mean if you don’t hold the wagons at Battalion level, when you pick the wagons up for exercises the may not have been painted. Cheers.

Yes agree with you there, its about priorities.

If the Americans still save budgets by not re-painting vehicles when they don’t absolutely have to, then there’s nothing wrong with anyone else saving money by doing the same.

A lot of regiments seem to still have fleets of vehicles in the dessert camouflaged and its not only the jackals.
Maybe they will get round to painting them olive drab.

I thought we weren’t meant to ‘travel’ to countries on the amber list?

I’ll get my coat.

Maybe we should go brown base layer lick the french.

Such light vehicles for ‘the Eastern Front’. They won’t bother or impress the Russians.

they should be if will are sending a message that we are training as we would fight.
its sends a message we are not taking the threat seriously.
to many commanders are not training for the threat and are to concerned with playing it safe.
the Russians and Chinese are not.

Not at all, total tosh mate. Fitting a GPMG or a 50 Cal for a road move hardly shows you are cutting about ready for a ruck. It shows that your weapons are locked up safely, in the event of an RTA or a convoy move halt. Come on, get real. A road move is a non tac move to an exercise area. If the russkis decided to invade just as they are moving to the training area im sure the lads can fit the weapons. However as the QM will have the ammo they will still be a waste… Read more »

Open top vehicles are great for summer, I hope they have the kit for a continental winter. Its not just the mountains where it gets cold.