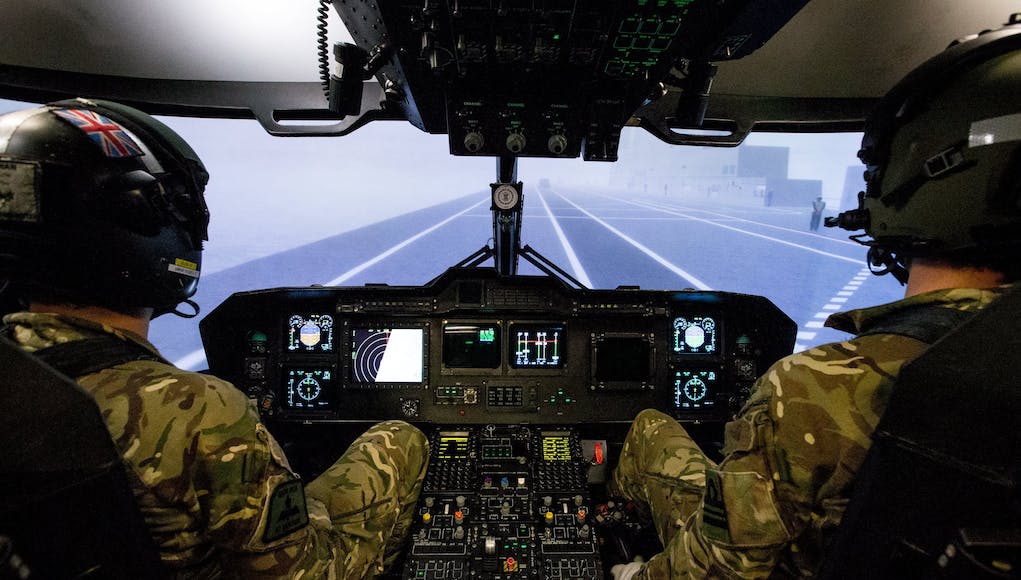 The Ministry of Defence has announced a £90 million investment in a helicopter simulation centre to help train Royal Air Force and Royal Navy helicopter pilots.

The deal will sustain 70 jobs at the Medium Support Helicopter Aircrew Training Facility based at RAF Benson in South Oxfordshire.

“Defence, Equipment and Support, the MOD’s procurement organisation, signed a contract amendment with simulator specialist CAE Aircrew Training Services to deliver training for Chinook, Puma and Merlin aircrews at a purpose-built facility, extending the use of CAE’s current contract for another 8 years.

The equipment provides a realistic representation of the operating environments the crews will fly in, including emergency situations like the effects of icing and rotor blade damage, the impact of gun or missile fire and electronic warfare, total electrics failure and fuel management issues.

The contract will deliver training for Chinook and Puma aircrews until the Puma planned out-of-service date. Training for the Merlin Mk3 will continue at the facility for at least two more years as the Royal Navy transitions from the Mk3 to the Mk4 helicopter.”

“The importance of effective synthetic training cannot be underestimated and continues to play an increasingly important role in our overall training curriculum.

The Medium Support Helicopter Aircrew Training Facility has consistently delivered a high standard of quality training to the operators of our front line helicopter capabilities. This agreement continues to maintain the world-leading ground school and simulator training facility for our helicopter aircrews.”

90 million??? We surely don’t have enough helicopters anymore to make this worthwhile. Especially if all the wildcats go as per the rumours. So much money for support, training and the like but little for actual weapons to use.

All the Wildcats go? What are you on about they’ve just been bought.

It was in one of the articles the other day in with the sell offs of the albions. Said they were up for consideration. Hopefully not.

Leaving the escorts with no Helicopter and the AAC with no helicopters save Apache.
Rumour.

We don’t have some if the most highly trained people by being slack with training.

I would normally totally agree, but with the decimation of the armed forces going on, what’s the point in training when our personnel have so few kit and weapons to operate?

Because those that remain would become bad pilots pretty quickly?

I’m not arguing with you that they don’t need training, my point was the massive cost for such a small fleet.

I agree with you Tim. A EC135 air ambulance costs less than £2m a year to operate and only £5m to buy. For our £90m we could have lots of them for proper training instead of another MOD contract to support jobs.

It is interesting that of the 6 simulators in this new centre, none of them are for Wildcat.

Well no they wouldnt be. One it’s not new it’s been around for some time. And two it’s a facility for the Support Helicopter Force of which Wildcat is not a part. Wildcat had never been or planned to be based at Raf Benson either. I’d imagine you’d find the Simulators for those at Yeovilton. Can an EC135 replicate a Chinook Puma or Merlin cockpit or flight characteristics? Our pilots have already flown the Squirrel at DHFS Shawbury already before they come to Benson so I don’t see how flying in yet more Squirrels prepares them for the OCU or… Read more »

The helicopter usually embarked on my son’s ship, a Type 23, is more often broken down than in service. Broken down just like the ship he’s on. That’s the fact of the matter. This country is a bloody joke.

Alan a simple fact is that a single helicopter even with the best maintenance crew in the world will struggle to remain operational for 40-45% of the time. Hence why the best surface combatants like Arleigh Burke have a double hangar. This reason alone is why drones and UAVs are the future of naval air power. Much lower flight costs and better serviceability and availability. Also with a UAV as no risk to human crew, your tolerance of failure or risk of launch is much higher than for a manned aircraft.