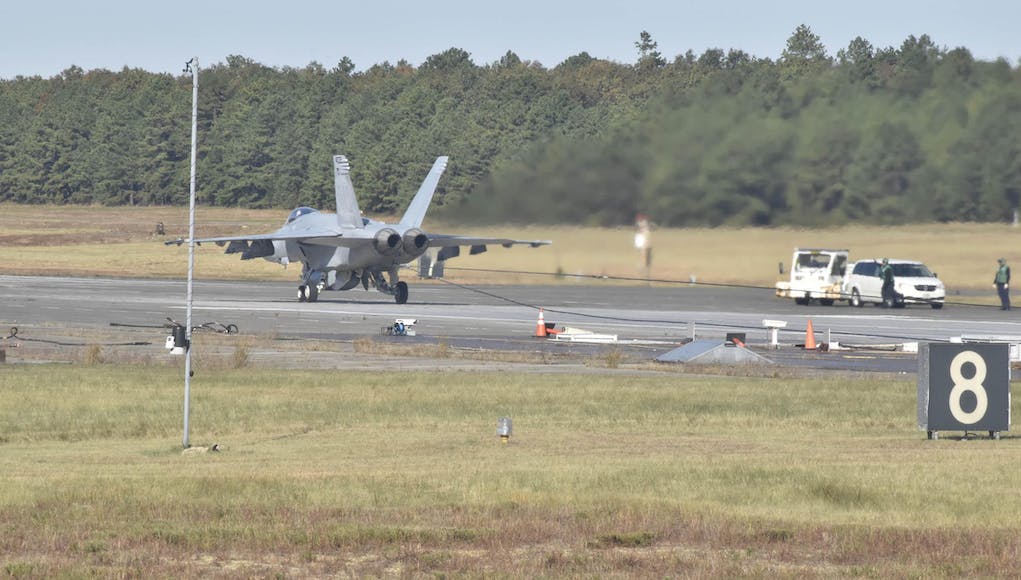 The system will ll replace the MK 7 hydraulic arresting gear which is in use on the ten Nimitz class aircraft carriers. The AAG is designed for a broader range of aircraft, including UAVs, while reducing manpower and maintenance. Rotary engines which use simple energy-absorbing water turbines (or twisters) coupled to a large induction motor provide finer control of the arresting forces.

The US Navy say that the two-day series of testing evaluated the AAG thermal management system’s ability to remove excess heat generated during fast-paced flight operations as experienced aboard the aircraft carrier to validate the system’s capability to meet USS Gerald R. Ford’s (CVN 78) operational requirements.

“This achievement represents a significant datapoint for AAG performance as experienced at our single engine land-based site. I’m highly confident with AAG going into CVN 78 Aircraft Compatibility Testing early next year where the full, three-engine recovery system configuration will be utilized.”

The U.S. Navy has made significant progress in maturing the latest carrier-based launch and recovery technologies – the Electromagnetic Aircraft Launch System (EMALS) and AAG system. As of September 2019, the EMALS test program has completed more than 3,800 dead-loads, or weighted sleds, and over 530 aircraft launches at the System Functional Demonstration test site.

Starting to look very promising. Two years from now? Maybe we should be looking to install one of these onboard the QE class much earlier than planned. 2030’s I believe.

QE/PoW with AAG, operating a STOBAR version of Tempest, circa 2035-40?

What iisn’t mentioned is the failure rate; it’s significantly higher than the USN’s requirements for a CATBOAR system. I can’t remember exactly, but the US DOT&E published a report on it that’s available online. I’d be surprised if it was truly ready for some time yet. For my money, I’d get the RAF/RN used to carrier ops again with the QNLZ & POW as they are. The estimated price tag for refitting them both was ~£6Bn. We won’t have a CATOBAR aircraft in inventory until the 2040s (if Tempest were to be designed for it), so the carriers will be… Read more »

All very strange considering how delayed the F35 has been. Interestingly on another point I read an article in the Economist last week (I include a link but need to sign up to read sadly) that was claiming that not too far into the future, it will only be safe to operate carriers in any potential peer conflict a thousand plus miles away from land which would take it out of its own strike range ironically. The long range anti ship missiles being developed are becoming so dangerous and its estimated with potential salvos from China as the prime example… Read more »

I’ve posted several times on the very same subject. The USN is reviewing its entire future fleet composition because of the emerging threat poised by systems such as hypersonic missiles, ballistic area denial missiles, and AI surveillance and targeting. There is a real debate in the service over the survivability of any large combatant and the wisdom of putting so much emphasis on high value assets such as CVNs and LHAs. The USMC has already moved away from its requirements for a USN 39 large amphibious vessel minimum for a 2 brigade amphibious assault capability realizing that such a concentration… Read more »

maybe fit it for landings and emals for take off, get hose ugly ramp soff design a folding wing f 35 that could greatly enhance the power and carry capacity of the Q.E classhttps://www.google.com/search?q=queen+elizabeth+carrier++without+ski+jump&source=lnms&tbm=isch&sa=X&ved=2ahUKEwiX9JiXmZLmAhXSgVwKHVmiAAcQ_AUoAnoECA4QBA&biw=1080&bih=468#imgrc=31xZvNCkLGB7JM:

maybe this might have an impact on how QE AND POW can operate couple this with EMALS and the catobar issue with the u.k carriers may be moot