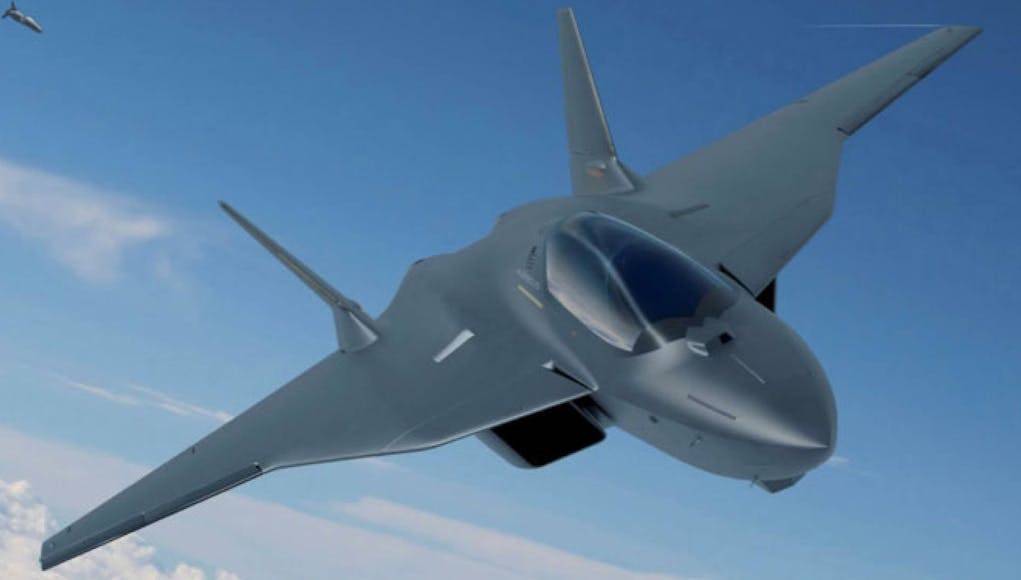 France and Germany have awarded the first-ever contract – a Joint Concept Study – to Dassault Aviation and Airbus for the Future Combat Air System FCAS programme.

The launch of the JCS was announced by the French Minister of the Armed Forces, Florence Parly, and her German counterpart, Ursula von der Leyen, at a meeting last week in Paris.

The decision by both countries represents what they call “a milestone to secure European sovereignty and technological leadership in the military aviation sector for the coming decades”.

The starting date for the two-year study is 20 February 2019.

“This new step is the cornerstone to ensure tomorrow’s European strategic autonomy. We, as Dassault Aviation, will mobilize our competencies as System Architect and Integrator, to meet the requirements of the Nations and to keep our continent as a world-class leader in the crucial field of Air Combat Systems.”

“FCAS is one of the most ambitious European defence programmes of the century. With today’s contract signature, we are finally setting this high-technology programme fully in motion.

Both companies are committed to providing the best solutions to our Nations with regard to the New Generation Fighter as well as the systems of systems accompanying it. We are truly excited about having been given this opportunity and appreciate the trust placed in both our companies.”

Overall, FCAS defines a system of systems combining a wide range of elements connected and operating together, including a next generation fighter aircraft together with Medium-Altitude Long-Endurance Unmanned Aerial Vehicles, the existing fleet of aircraft (which will still operate beyond 2040), future cruise missiles and  drones flying in swarms.

The overall system will be interoperable and connected in a larger perimeter with mission aircraft, satellites, NATO systems and land and naval combat systems.

Tempest better be better than this or else…

Also I just had a news update on my phone saying that we will have a squadron of drones capable of jamming enemy air defences? Thoughts anyone? It seems that we are getting lots of new tech today!

Apparently the DS, in his speech to RUSI, mentioned this as well as the talk of the Littoral Ships and QEC maiden deployment.

RAF will have drones to “swarm” defences. I took that to be mini drones launched as a weapon to saturate, not a stand alone squadron of Reaper UAV.

I may be wrong of course.

Yes. I think the French & Germans are behind the curve. Future pilots will be a safe distance away. I would expect the lines between cruise missiles and planes to blur. Placing a human on-board will be seen as a limiting factor. Human still in control though.

After much deep and profound brain things inside my head, I have decided that SPEAR3 is the ideal platform on which to build a drone swarm.

Who knows. I did not hear what he said.

A 35 would have the brain for it wouldn’t it.

The concept has been around a while. Take a look at this article….. https://www.wired.co.uk/article/drone-swarms-change-warfare

It’s going to be so much fun to watch how this works out. For the French the partnership will be their tech and Germany’s cash. For the Germans it’s about getting the workshare sorted on intended orders. Then cancel them. We’ll find out who’s the smartest.

If the UK can arrange a joint project with Japan and Sweden (Italy looking a little unreliable) it should progress quite well.

I spotted on the news feed earlier that India is to be invited to join the Tempest project. Not yet sure if there is any truth in it, but hopefully things going on behind the scenes to get some momentum.

India? Surely they would make the French look flexible? The Empire Strikes Back?

Maybe the Rafale debacle has put them off working with the French. They got completely screwed over on that contract that they only saw out to save political embarrassment.

India would be the worst country to partner with, no money, no tech and a political system that makes America look competent. No doubt any deal would also involve mass transfer of our technology as well.

do you know that most high tech companies recruit heavily from India? Companies like Microsoft, and Google? That’s probably why they cannot put together a high tech company. All their “brains” have been recruited by Western countries.

Do the Italians trust the French and Germans. They will be the next out of Europe after us. They already have F35s and have the refurbishment centre.
They can quite easily folow us into to Tempest.

Agree 100% with Martin. Cooperation MUST be with Western countries only. European countries, Canada and Australia. Given that India and Russia are allies to the extent of leasing a nuclear-powered attack submarine, purchasing the S400, the Sukhoi SU30, and of course BRAHMOS, it would be idiotic to trust them with cutting-edge technology. Moreover why contribute to development of a potential future rival. Methinks of the foolish transfer of Rolls Royce Nene technology by a past Labour government. To the other guy, it’s been established for om experience that Western companies recruit Indians not based upon technical competence but because they’re… Read more »

Will
Reply to  Yardarms and Ratlines

That rules out South Korea and Japan then….

Rokuth
Reply to  Yardarms and Ratlines

Wow! I’m the “Other guy!” I feel somewhat lecherous… You may be right about Indians accepting lesser pay compared to their Western counterparts. However, to them, they are getting paid far more than what they would receive in India. That said, having lived and worked in the USA, there are some severe restrictions in hiring foreign workers, especially in the hi-tech field. Companies have to show that there are no equivalent US person or persons to meet their needs and/or numbers. The pay being offered has to be commiserative of the equivalent pay of a US worker. A lot of… Read more »

“This new step is the cornerstone to ensure tomorrow’s European strategic autonomy. We, as Dassault Aviation, will mobilize our competencies as System Architect and Integrator, to meet the requirements of the Nations and to keep our continent as a world-class leader in the crucial field of Air Combat Systems.”

If that’s not a statement of a European Superstate, then what is?

When will it dawn on Germany’s satellites, that they are mere vassals of an economic Fourth Reich?

So this is a joint project between German and France, with the contract for the study going to a french company in partnership with a mainly french company… when you start tracking the major share holdings you can see this is essentially the French and German governments the french government a contract. German is so going to get milked.

The Germans have little choice now that we are leaving the EU but to work with the French. I have no doubt they would have preferred to partner with BAE and RR in aerospace. Expect the French to suck out of the Germans to British technology we have shared over the Eurofighter years.

They Still could partner with BAE and RR, they are fine with partnering with our Armoured Vehicles.

Yeh, quite a lot of UK – Germany deals going on. Challenger upgrade, Boxer. Typhoon replacment for Tornado – German Luftwaffe chief who wanted F-35 given the push. Looks to me like govt to govt UK and Germany strategic cooperation / job creation program.
My money is on the Meko getting the Type 31 contract to be built at H&W.

They’ve been given 65 million Euro for this so should pay for some nice wine a good dinner or two and a few flights back and for.A nice power point slideshow for the press, job done.

Might be just enough to cover Jean-Claude Juncker’s wine allocation for political discussions around this programme. This funding is nothing compared with the £2 billion gave to the Tempest programme for tech development.

Yes this project is going to go at a snail’s pace so many issues that are not technical.It looks like Germany are about to order 33 Typhoons to replace their tranche 1 planes so they will be in no hurry to get whatever comes out of this.

French-German relations are about to go sour. It seems France is going to vote to give Brussels power over the new gas pipe line from Russia to Germany. This may cause an energy crisis in Germany as it shuts its nuclear and coal power plants. Given France and Italy have just recalled Ambassadors, the prospects for Euro defence co-operation seem rocky. Also there must be some anxiety about if a leopard can actually change its spots. France was basically thrown out of the Eurofighter project because it insisted on 60% of all design and manufacture.

I have serious doubts that the Franco German fighter will ever get wind under its wheels.

From a political perspective, they will lock horns from the get go as France adds to the cost and limits capability by insisting on carrier capability … The Germans will push hard for cost reductions and start insisting on single engine designs etc.

Both pushing in different directions and ending in a big bun fight and cancellation.

I’m all for the truly international, British led Team Tempest, not some European, politically driven compromise…

Germany – France may well fail to be a good combination here but I feel like we really need one or two partners for Tempest. Let’s be honest we won’t be able to afford to develop it on our own especially since we’ll be buying less than 200 potentially less than 100. If the UK doesn’t secure partners soon then it could end up being a white elephant that’s not as cutting edge as US competitors and too expensive for anyone else. Sweden, Japan, Korea, Poland could be good potential partners. In that order.

It has been reported today in Defense Industry Daily that Spain has decided to join the FCAS program. It was reported from this link :

Yeah, no doubt Italy will be next. What will inevitably happen is that the quartet push on with a capable next-generation fighter, funded by the 4 largest EU countries. While we try to fund a home-grown competitor, which is financially way beyond our means, only to find the export market saturated with the European and future US rivals. When the UK government of the day declined to take a leading stake offered in Airbus, it was the death-knell of our civil aviation sector. We won’t see another UK-designed-and-built airliner. By getting ourselves out of the EU, we have just handed… Read more »