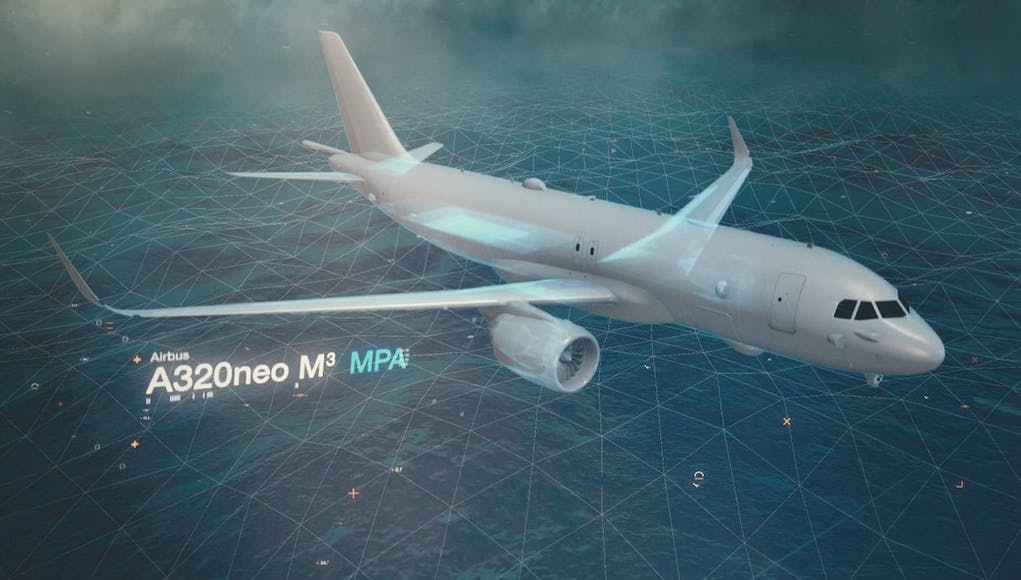 The variant – designated A320M3A – Airbus say, would be designed to fulfil a range of ISR roles, particularly maritime patrol and anti-submarine warfare.

It also can be outfitted with modular roll-on/roll-off payloads for airlift missions ranging from carrying passengers, troops and VIPs to medical evacuation and transporting cargo.

According to a press release from the firm:

“One of the biggest applications of the A320M3A is for maritime patrol and anti-submarine warfare, with countries in Europe and elsewhere seeking replacements for ageing aircraft – many of which will be encouraged to develop fleet commonality driven by the intensive growth of joint operations with member nations of NATO (North Atlantic Treaty Organisation).

Advantages in offering the new engine option (NEO) version of Airbus’ A320 commercial jetliner include an extensive capability for growth in a fuselage cross-section that is wider than its competitor in the same size category, the long range and endurance, as well as the lowest operational and life-cycle costs in its class. Other pluses for the A320M3A are the aircraft’s high reliability (proven in airline service), and the resources of an established worldwide supply chain and training network.

The A320M3A also benefits from being a low-risk solution: being based on Airbus’ highly-mature A320 airliner family in high-rate production; and building on the company’s proven capabilities in producing military derivatives of its commercial aircraft – such as the A330 Multi-Role Tanker Transport (MRTT), which is in use by military services around the globe.”

Too little too late for the RAF, I suspect it’ll be the same story if/when Wedgetail gets selected to replace Sentry.

They were talking about a maritime patrol A320 in the 1990s and they are still talking.

France and Germany need a new aircraft, but probably around 20 airframes. I guess they would in excess of 70 orders to make it cost viable.

so its going cost a lot of money and time to develop this aircraft, meanwhile P8 is available now at a reasonable price.

Exactly, for those in the market for this type the P8 is highly attractive and available now.

Not only the P8 but also the Kawasaki P -1

I do wonder if Airbus is a viable military aircraft manufacturer. They are always responding to new builds rather than pre-empting them. If you look at the maritime patrol aircraft that are/were in service with NATO i.e. the Orion, Atlantique and Nimrod. It was plain to see a more modern airframe was required. They should have had an Airbus aircraft in the pipeline and ready to go years ago. Unless they can produce and sell the Neo for a lot less than the P8, then this aircraft will be going nowhere. As has been said before Airbus do fantastic presentations… Read more »

UK made some bad calls on the MRA4, Bae had a stake in airbus at the time and could have developed a real challenger to the P8.

Airbus has in the last 2 days suggested a merger of all European military aircraft manufacturers, its never going to happen because the French will demand too much control.

“Bae had a stake in airbus at the time and could have developed a real challenger to the P8.”

BAe had sold their 20% stake in Airbus. That was the problem, they wanted all of the cake for themselves, hence the rebuild Nimrod (at one point they even, incredibly, suggested newbuild Nimrod…). If they hadn’t we’d have got an A320/319 MPA about 5 years ago and it would be nailed on for most European MPA procurements.

In 2002 Airbus teamed up with Lockheed Martin to offer the USN a Airbus 320 maritime patrol aircraft in competition against the Boeing 737.

This idea of an Airbus maritime patrol aircraft has been going nowhere for years, I suspect it will come to nothing.

More day dreaming from Airbus, as has been suggested, an order of at 70 would be required to make this viable.

They would struggle to order 20 and the unit cost would be enormous!

All to develop a P8 lookalike!

It will never ever happen!

Airbus has talked about this for at least the last 20 years or more. It has never materialised because there has never been a solid business case behind it but most importantly, because of the violent opposition to such a programme from within Airbus’ own management. They have always felt they lacked the necessary resources to stay at the forefront of commercial airliner development and tackle a complex military programme as well. As if proof was needed, they burned their fingers on A400M. Which is why it and the A330 MRTT programme were effectively migrated to the Defence & Space… Read more »

I thought Spain had or was developing a MPA based on the Airbus 319 airframe?

That’s what I mean David. Although based in Spain and with the majority of the engineering resources being Spanish or Spanish based, it’s all part of Airbus now. The consequences for the brand’s reputation and the share price are taken very seriously by the Airbus board. So yes, Spain would like to do a 319 based MPA. All the building blocks are there. A combination of the Chilean and Omani C-295 MPAs possess between them all the necessary elements. The 319 would provide a mature, reliable, well proven platform. But the integration would still cost a lot of money and… Read more »

The UK and MOD should have absolutely zero to do with this “too late to the party programme”.
The Poseidon P8A has been selected for the RAF and that is the aircraft we should now invest in. A follow on order for a further 6 aircraft is needed to deliver a reasonable force level considering the huge UK maritime patrol zones.
I would like to see further announcements on this in SDSR 2020.