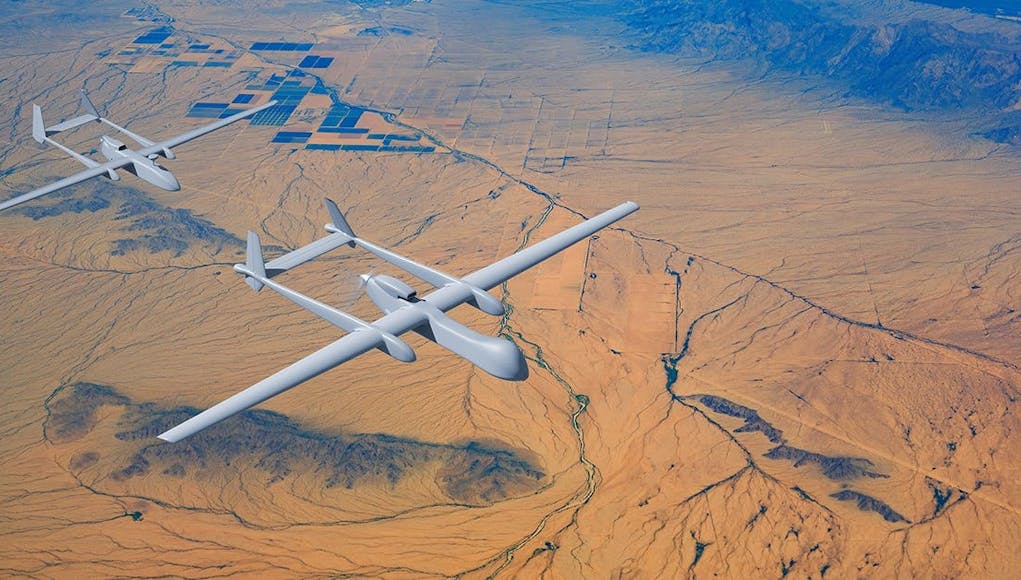 The contract includes both the provision of Heron TP UAS as well as all operational services required for the system.

In accordance with German budget law, the contract will become effective upon publication of the federal budget SAY aIRBUS.

Heron 1 drones, which are currently deployed by the German Armed Forces in Afghanistan and Mali, are to be replaced by the more powerful IAI (Israel Aerospace Industries) made Heron which is already fully operational with the Israeli Air Force, although the contract between the Bundeswehr and Airbus is based on this previously successful model.

The company say that the project will have a two-year set-up phase, followed by an operational phase lasting a further seven years, thereby bridging the gap until a sovereign European drone will be developed.

“This project will provide the Bundeswehr with an even more efficient system that will better protect soldiers in a wide range of threat situations as well as the at-risk civilian population,” said Jana Rosenmann, Head of Unmanned Aerial Systems at Airbus.

“The modular concept will allow us to provide the Bundeswehr with the capabilities it needs on time for the years to come.”

“We are thrilled and proud of this agreement with the Federal Ministry of Defence, a major strategic customer. The Heron TP is a first rate strategic RPAS. Its strong performance will provide Germany with unprecedented air superiority. We would like to thank the German government for this vote of confidence built over many years. We are committed to preserving the quality of our service and systems and look forward to continued collaboration.”

Under the terms of the basic contract, the Bundeswehr will receive five aircraft equipped for reconnaissance missions and capable of carrying weapons, four sets of ground segments, training environments and all system operational services. The basic contract also includes preparing the drones for their use in future countries of operation.

The systems are equipped with electro-optic and infrared sensors and imaging radar systems to perform far-reaching reconnaissance tasks. Satellite communication systems and German data and voice encryption systems are also part of the configuration.

The UAVs are also kitted out with a weather radar system so that they can operate in bad weather conditions.

They’ve bought 5 to ensure that 4 remain inoperable at all times lol.

They are…but although the Israeli’s arm their Heron, the German’s probably won’t.

Truth is the best choice by far is Protector now. Israel’s lead in UAV’s has been completely eclipsed by US systems. But the German’s still occasionally use their budget as a subsidy system for Israel. There is no other real reason to go for a Heron. Protector offers a whole lot more and you can plug into all of the development work on payloads the US is doing.

They are currently trying to off load a Global Hawk to anyone who will buy it. Apparently they have spent 800 mil euro on it and it has never really worked. It’s not even cleared to fly in European air space.
And you thought Abbey Wood was bad….

Always nice to see others also in the s***t not just the UK.

Our military situation never seems as bad when you look at the Germans current state of affairs.
You really couldn’t make it up lol.

Wow I didn’t know that.

Why is it not cleared to fly I thought that was one of the most advanced UAV out there?

Hmmm. The Protector flew across the Atlantic to Fairford, so I guess so.

Not sure mainland Europe ever finalised common flight certification though..might be wrong.

Gun,
The Euro hawk not Global hawk issue is down to EU ruling and not German. Yes the Germans wasted a load of cash but since then they have actually ordered 3 Triton ( the latest iteration of Global hawk)

It’s much worse than that. They’ve stripped it of lots of hardware including the flight control and GPS. You couldn’t even fly it if you wanted to…fit for scrap only.

It’s actually a pretty good capability for the UK to have in its Triton guise, but to refit the German one would cost as much as to procure a new one.

I am really curious to know where the German defence budget goes, considering they almost spend as much as us in raw money terms but on face of it, have considerably less capability. Is it that they waste a lot more money or is our capability skin deep and there is significant gaps behind the surface when it comes to supplies etc.

Interesting question. Throwing out one random potential starting point – How do pay & conditions compare between the UK & German military particularly at the more numerous lower pay grades? Increased salary and/or ancillary benefits (pension, health insurance etc) in Germany (if any of those exist) vs the UK could be one piece of the puzzle.

I think our capabilities are skin deep in most areas. But they still include capabilities, know how, professionalism and experience others do not have. These along with investment in high tech cyber capabilities, our membership of 5 Eyes, and our bases around the world, legacies of empire, give us many advantages. BAOR was stripped to provide for 1UK Division in the Gulf in 91 when spending was higher in GDP terms. It has been well publicised that RN ships deploy with minimal numbers of missiles, RAF Storm Shadow missile stocks reduced, the Mods storage footprint “rationalised” and so on. I’ve… Read more »

I saw a graph, can’t remember where, that showed 70% of German defence spending going on pay and pensions.

Yep the German military are in a bad state, but we can hardly laugh. Royal navy down to less than 17 frigates/ destroyers. Only 7 attack submarines. Things are bad!