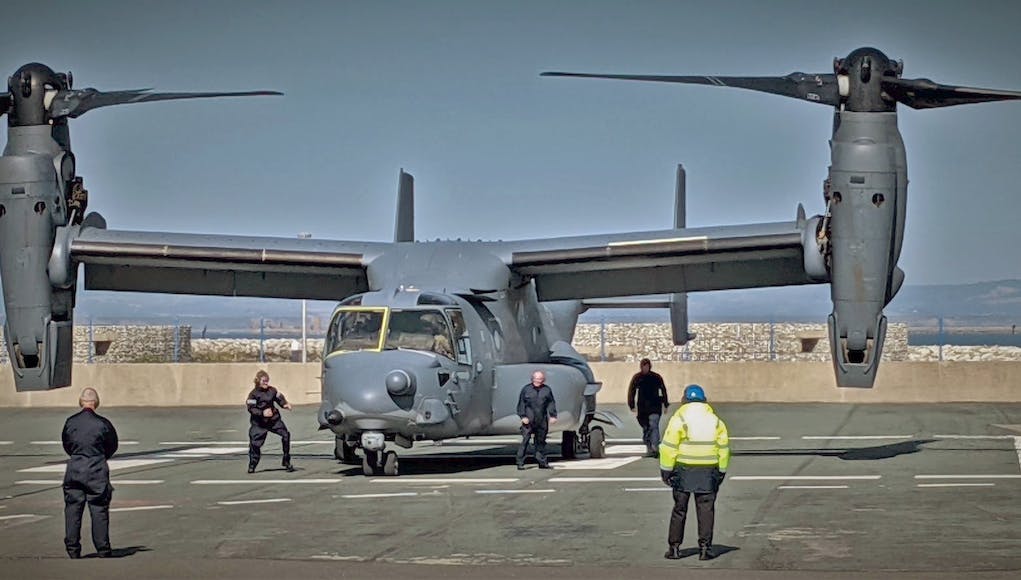 The US military’s unique tiltrotor has been training with amphibious ship RFA Mounts Bay prior to deploying to the Baltic this spring.

According to a news release on the Royal Navy website, the US Air Force’s 7th Special Operations Squadron dropped in on the support vessel off Portland with their MV-22 Osprey, the ‘tiltrotor’ which takes off and lands like a helicopter, then rotates its propellers to fly like a conventional aircraft.

“Operated by the US Marine Corps and US Air Force, it’s the main battlewagon for carrying American marines and related units into battle. Royal Marines rely on the Merlin Mk4 to carry 24 commandos into battle at a time (based a short distance from Portland at RNAS Yeovilton with 845 and 846 Naval Air Squadrons).”

The Ospreys have dropped in on Royal Navy flight decks over the past decade, but not on a Bay-class ship until now.

“The vessels provide additional space to carry marines/troops and their equipment in support of Albion-class assault ships which spearhead any UK amphibious operation.”

Further link ups are planned later this spring when Mounts Bay joins HMS Albion and the UK’s Littoral Strike Group heads to the Baltic for exercises with US and NATO forces, including the region’s largest annual naval workout, Baltops.

I’m wondering if this machine could be a replacement for those early Chinooks that the MOD intends to ground? I’m sure Osprey has some lift capabilities and with its additional speed over conventional helicopters, could provide the MOD with a useful option?

No chance, but Mounts Bay is being converted as a LSS and will need to operate with USMC and SEALs.

Maybe a tilt-rotor will replace Chinook and Merlin in 2030s however.

Replace Merlin perhaps, especially for the HC4 variant, but V-280 is the only candidate for that (assuming its wins the FLRAA competition) and it will be too small to replace Chinook.

I’m pretty sure I read that the older Chinooks were to be replaced with new.

Yes a FMS for 16 new CH-47 for UK was approved by Congress last year, but looks like it will be only 9.

The MV22 has far greater range and higher speed than a Chinook. It would make perfect sense for the UK to buy it rather than just buy more Chinooks. but it doesn’t come cheap, so I guess it won’t happen.

Very expensive to both own and operate, especially a small fleet. Better to wait for next generation of rotorcraft which will be a lot more mature, cheaper and can replace several types.

Its going to be a very long wait for a next generation tilt rotor. There is nothing on the horizon in comparison to the MV22 which itself will be around for a good few years yet. The Osprey would solve a few all round problems for us, but it all boils down to the bean counters. 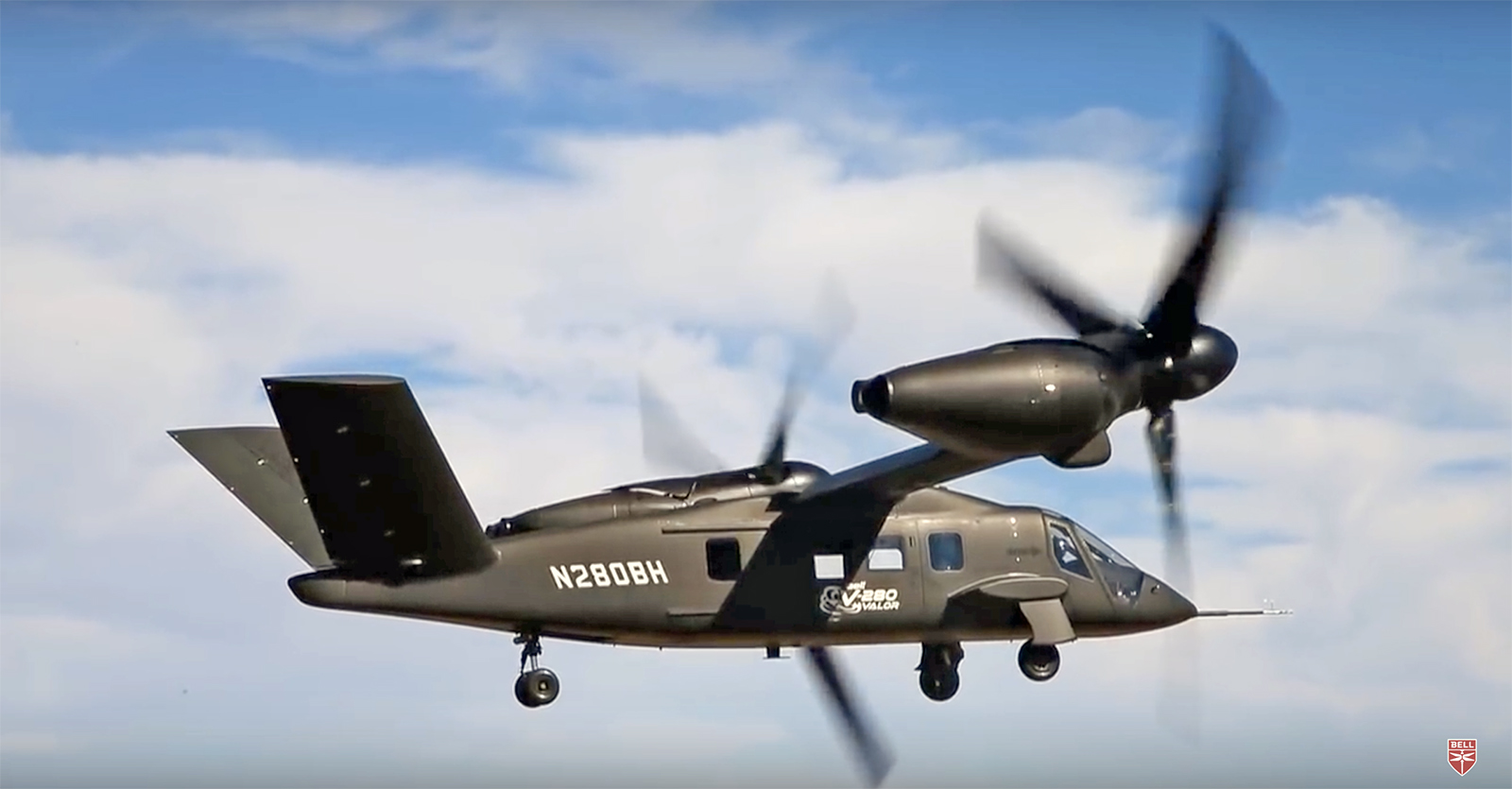 Valor would have been perfect, but it looks like we are investigating fixed-wing, cats and traps instead. Fixing a timeframe for a decision is critical; it can’t be allowed to just drag on. However 2023 for a sovereign system seems ambitious. Is there a system they already know about? (Return of EMKIT?)

If it turns out catapult launch is still too expensive, what then? Purchase tiltrotor, more embedded USMC, or will the decision be kicked into the long grass for another ten years?

No one beast will be optimal for all tasks, and that includes Vixen/Mosquito. All rounders sacrifice performance for price & maintainablility. Valor has two figures for service ceiling: 6,000 ft for hover and 25,000 ft in flight. The latter is 10,000 ft higher than the Merlin and around the normal cruising height of E2-D. I don’t think it’s insufficient. I can’t find figures on endurance, but Bell claim “unmatched” endurance, and I find it hard to believe a tiltrotor won’t be hands down better than a helicopter. What endurance figures do you have that you say aren’t enough? If you… Read more »

AEW&C can be unmanned of course – we can fly drone strikes over Syria from Lincolnshire. Mosquito prototype is due to fly in 2023. Sea Guardian has a ceiing of 50,000ft, Kratos Valkyrie 45,000ft. A version of Sea Guardian with folding wings for carrier ops is under development.

I think out of the two aicraft the defiant would be the best option , it would
be able to land in most areas that chinook has landed.
The tilt rotor you would imagine would require a bigger landing area because of the rotors.

When I spoke to marines and engineers on 2 wasp class ships both groups hated it. Engineers claimed 24 hrs maintenance for 1 flight hour. Marines would try and bagsy a seat in a chopper.this was 6/7 years ago and I know things have improved

As is being said, its expensive and costly to operate. Its a luxury. 400 built apparently to date. 1200 chinooks. If it’s. as tiresome to maintain as it’s claimed then it’s not for us.

Will
Reply to  maurice10

There’s no money for that.

Ah, an osprey visiting what was once HMS Osprey.

To all those saying it, the RN, or RAF for that matter, will never operate M22.
Reasons…
Too big.
Too expensive.
Production line now closed.

Production line is not closed. They are making V-22s for the USN’s COD requirement.

Certainly is expensive, with new mv-22 being sold to Indonesia at $75 million each, but production of v-22 still ongoing, as is modification of the v-22
https://www.aerospacemanufacturinganddesign.com/article/boeing-opens-updated-v22-production-facility/
With greater range and speed plus a roll on-roll off refuelling kit I don’t believe it should be ignored as a possibility.
How much does a Merlin cost and how much more capability would the Osprey have?

Heavy on maintenance and being sold to Indonesia! Can anyone see the elephant in the room?

It is also now serving in the USN replacing the COD aircraft.

The USA seem to be getting involved with our RN of late.Do Japan not have MV 22 ?

The clamour for us to buy some for the RN is probably never going to completely die away – but as has been said as the first generation tilt-rotor Osprey is both expensive to buy but also very labour intensive and costly to operate. A small UK owned fleet would carry a hefty price tag that would call into question the overall gain. We’ve been making some gradual strides towards fewer aircraft types in larger fleets and for the sake of commonality and through-life costs this should continue. Chinook is a tried and tested workhorse so we should definitely keep… Read more »

I only see this justifiable for special ops.

Do we really want a small, niche and expensive fleet when Chinooks with extended range fuel tanks will do the job almost as well?

The tilt rotor provides distance and speed but not heavy lift or underslung load capacity .