A number of U.S. Navy P-8 Poseidon Maritime Patrol Aircraft are flying from RAF Lossiemouth to patrol the North Atlantic.

A number of American P-8 aircraft were spotted over Scotland today, this article is an attempt to explain what they were doing should anyone be curious. 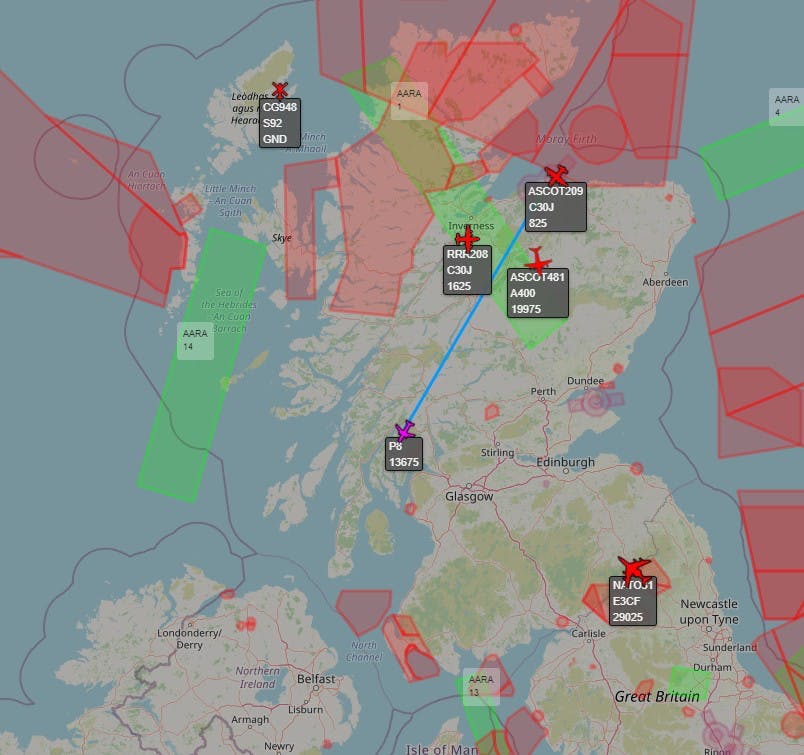 It is understood that four American P-8A Poseidon Maritime Patrol Aircraft are operating from Scotland patrolling the Greenland-Iceland-UK (GIUK) gap, this has been going on since at least October last year and is partly due to the UK fleet not yet being at full strength. They were originally flying from Glasgow Prestwick Airport but have now moved to RAF Lossiemouth after completion of work to the runway.

Glasgow Prestwick Airport, for anyone interested, is a passenger and freight airport serving the west of Scotland situated 32 miles from Glasgow. It is the less busy of the two airports serving the area, the busier one being Glasgow Airport. The airport frequently hosts military aircraft crossing the Atlantic or supporting exercises.

According to an RAF statement at the time:

“Since then, crews from CXX Squadron have been securing the seas over and around the United Kingdom on operational missions. 54 Squadron have also been training new pilots and weapons systems operators on the platform, as 400 additional military personnel will be joining Team Lossie in Moray to fly and operate the nine aircraft.

Poseidon is a hugely capable submarine hunter, able to locate, identify, and track potentially hostile submarines as they operate close to our waters. Its powerful radar is also able to detect and track surface vessels above the waves. It boasts a comprehensive communications suite which means the intelligence it gathers can be passed to commanders whether they are in the air, on a ship, on the ground, or back at RAF Lossiemouth.”

We now know that the reason the USN P8s were operating from Prestwick and not Lossie was that the runway works were still in progress, but they have now moved on completion of works. However, last week it was reported that the RAF P8s were operating from Lossie whilst the same works were ongoing. Don’t understand why it denied Lossie to USN and not RAF. A small and rather anal question I know. This also tells me that the patrol of northern UK waters and area of interest served from UK and P8 training consumes 8 aircraft. How will we… Read more »

I think what it tells us is that 9 airframes are not going to be anywhere near enough for all our commitments/requirements, regardless of the number of aircrews we assign to each aircraft!

USN P8s were operating from both Prestwick & Lossie at the same time, ~8 or 9 airframes in total with occasional changes of airframe rotating to/from Sigonella.

there is a photo on Facebook of Lossie pan with 10 P-8s (7x USN + 3x RAF) https://www.facebook.com/RAFLossiemouth/posts/4025208694178589 In the thread RAF Lossie mention that they have seen a tenfold increase in Russian submarine activity.

Calling it “Glasgow Prestwick” is super, the airport is 30 miles away from Glasgow… which is main reason its been losing money for years. It can’t be closed though as it is a strategic asset for transatlantic military flights and the fact it is virtually never closed due to Ice and Fog as the area has very mild micro-climate.

Something going on undisclosed? Increased Russian sub activity picked up by IUSS perhaps? ( was SOSUS )

We all know 9 isn’t enough, but, for a change you have to be impressed by the delivery rate and build up training they have achieved. Another 3 would be must enough but I cannot see it happening.

9 isnt enough, clearly. We cant expect the USN to take up the slack…

Clearly they do expect the USN to pick up the slack or they would have ordered more.

“Surface vessels above the waves“ glad they explained that.