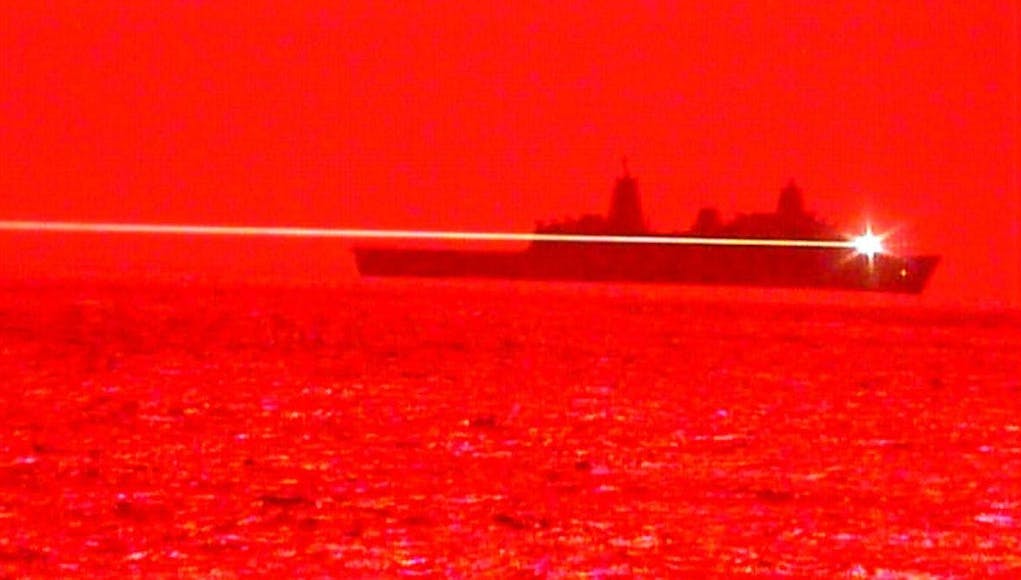 Laser Weapon System Demonstrator (LWSD) is a high-energy laser weapon system demonstrator developed by the Office of Naval Research and installed on the Portland for an at-sea demonstration.

“LWSD’s operational employment on a Pacific Fleet ship is the first system-level implementation of a high-energy class solid-state laser. The laser system was developed by Northrup Grumman, with full System and Ship Integration and Testing led by NSWC Dahlgren and Port Hueneme. The U.S. Navy has been developing directed-energy weapons (DEWs), to include lasers, since the 1960s. DEWs are defined as electromagnetic systems capable of converting chemical or electrical energy to radiated energy and focusing it on a target, resulting in physical damage that degrades, neutralises, defeats, or destroys an adversarial capability.”

“By conducting advanced at sea tests against UAVs and small craft, we will gain valuable information on the capabilities of the Solid State Laser Weapons System Demonstrator against potential threats.”

“The Solid State Laser Weapons System Demonstrator is a unique capability the Portland gets to test and operate for the Navy, while paving the way for future weapons systems,” added Sanders.

“With this new advanced capability, we are redefining war at sea for the Navy.”

Watch video footage of the test here and here.

Only a matter of time till these systems become common through the fleet. The only restriction is the necessity for for a great deal of power generation capability for the larger systems.

Yes that’s correct, also laser guns will need energy storage devices, because of the amount of energy expended in a fraction of a second of each laser shot, will exceed generation capacity of a warship.

Currently, only the large surface fleet units such as the San Antonios, CVNs, and Zumwalts have the generation and capacitor capability to operate the high wattage lasers. the AB Flight IIIs will also when they enter service. The next large surface combatant which will replace the Ticos and ABs will be built around that capability. The FFGs will probably be able to operate at least one as well because they are supposed be greatly upping the generation capability of the USN’s model.

That’s why they use RR systems on board these vessels, for this reason I can see the Type 45’s and the much anticipated Type 26’s having the ability to use these weapons.

Not sure how the US are doing it, but the UK’s current developments talk of using flywheels to store energy kinetically.

Just some more news on a slow day…

Has there been any update on Dragonfire yet? Is it likely to go into production? Could be good as a point defence system for the QE carriers.

what happens if there’s a flock of birds! ?, and those amphib ships are great looking beasts, a couple for the RN would be a great Bulwark and Albion replacement.

Cam, any idea what makes these vessels so expensive ($2B+ each)?

The Anglo-Spanish partnership, known as Team Resolute, has been announced as expectations grow that the British Ministry of Defence is preparing to reopen a competition to build two, or maybe three, ships capable of delivering ammunition, dry stores and spares in a requirement known as the Fleet Solid Support program.

If we can’t even equip our warships with decent ASMs, or a decent medium gun(T31), or our carriers with decent self defence(SAMs) & so much more else, I wouldn’t get too excited about future laser weapons. Our incompetance to fund, equip, man & provide sufficient ships for our navy is a disgrace to a once naval superpower.

It dropped a low and slow drone. Direct Energy weapons are not going to be stopping ASMs anytime soon. The power systems and laser systems themselves simply don’t exist and won’t for at least a decade. The power required for dropping ASMs at a decent distance is huge. The laser output needs to be a hundreds of times larger than the current best system. Systems will be dazzlers against optics and used against close in swarm attacks A problem is weapons used against people must be designed to kill not maim. The UK had a dazzle weapon Chevage, in the… Read more »