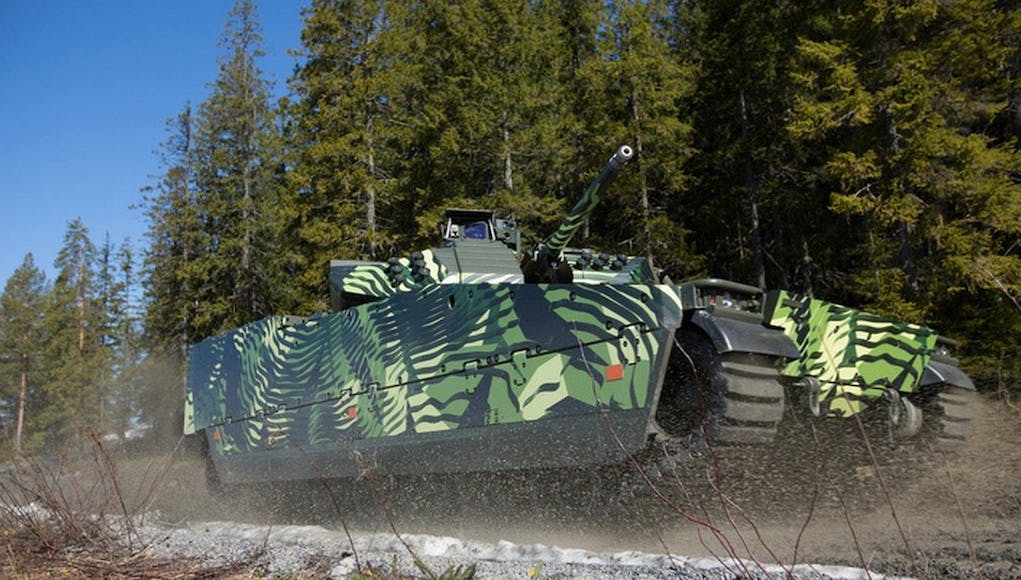 Share
Facebook
Twitter
Pinterest
WhatsApp
Email
BAE Systems will present a new solution for addressing the challenge of battlefield situational awareness at the 2018 Eurosatory trade show in Paris this week.
Called iFighting®, the technology is designed to optimize vehicle and crew performance by harnessing data to enable faster decision-making in combat.
BAE Systems will be displaying the latest version of the CV90 Infantry Fighting Vehicle, known as the MkIV, integrated with iFighting. The company say that the MkIV, the fifth generation CV90, features advancements in speed, mobility, and electronics, and is being offered to the Czech Republic to replace its ageing fleet of infantry fighting vehicles.
Based on technology integrated by BAE Systems, the iFighting concept fuses together data from different systems within the vehicle to filter through and prioritise the most critical information. This allows the crew to make quicker and more effective decisions to improve overall performance on the battlefield.
“As we roll out new technology, we know that adding displays and panels to combat vehicles could potentially distract crews in an already-complex combat environment. The key was finding a way to help improve situational awareness and combat efficiency without adding to the crews’ cognitive workload, and we believe we have done that with iFighting,” said Tommy Gustafsson-Rask, vice president and general manager of BAE Systems’ Hägglunds business, which designed and built the new CV90 MkIV.
The CV90 MkIV will also have the fourth generation Electronic Architecture compatible with NATO-standard Generic Vehicle Architecture (NGVA), which allows crews to manage large amounts of live-stream data and is interoperable within the NATO Alliance. This step change will enable the introduction of autonomous crew support, machine-learning algorithms — including artificial intelligence capabilities — and augmented reality with the support of 3D map data to enable future adoption and growth.
“With advanced electronics, iFighting® creates a more combat-effective system by reducing the amount of information the soldier needs to process,” said Mikael Segerman, BAE Systems Hägglunds director for the Czech Republic.
“This results in increased situational awareness to aid decision-making on the complex battlefield. iFighting ultimately helps to improve the performance of an inexperienced crew, as well as amplifying that of an experienced team.”
BAE Systems has partnered with several Czech companies to offer the CV90 MkIV to the Czech Army. The MkIV was unveiled earlier this year as the latest version of the combat-proven CV90, which is in service with numerous European nations.
0 0 vote
Article Rating

Sounds like it’s made by Apple. I hope it doesn’t crack if you tap it too hard.

interesting. it would be nice if they could bring a package like this to the section commander in a light weight (and actual light package not bowman lead weight style) and tablet size format.