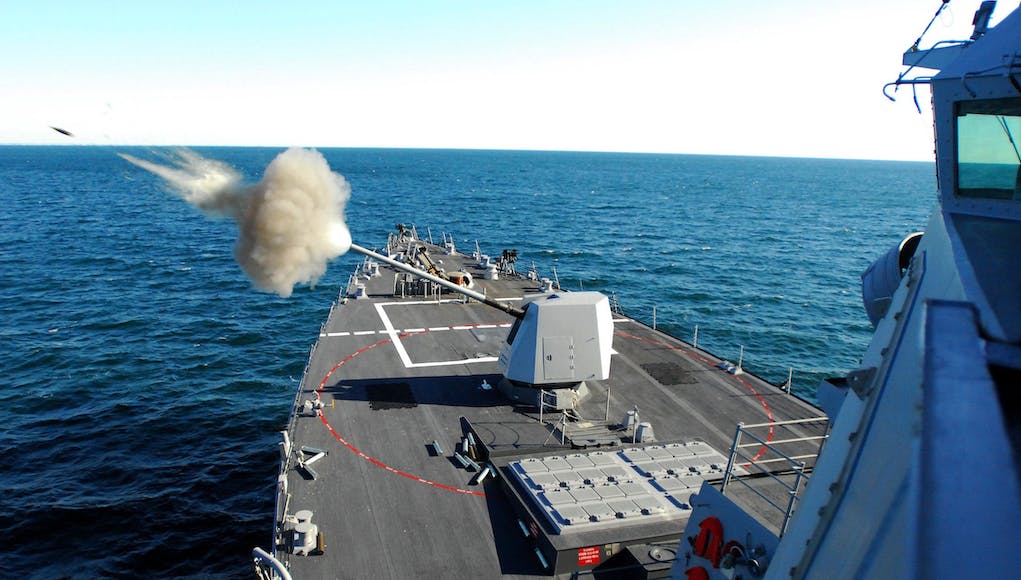 Share
Facebook
Twitter
Pinterest
WhatsApp
Email
The US Navy has awarded BAE Systems a $46.8 million contract option to deliver Mk 45 Naval Guns.
The contract modification calls for upgrading existing guns to the Mod 4 configuration to increase the firepower and extend the range of the weapons. The Mod 4 variant will be the same one used by the new Type 26 Frigates in Royal Navy service.

This modification to the initial 10-gun contract brings the full value of the award to $176.8 million for the 14 guns.

Bae say that the Mk 45 is ‘the lightest, most compact, 5-inch fully automatic naval gun in the world and is the most widely deployed to the US Navy and other allied navies’.
Updates to the Mod 4 configuration include a structurally strengthened gun mount and more advanced electronics. With its stronger mount, the gun can achieve 50 percent higher firing energy, allowing munitions or projectiles to travel faster and farther than previous versions say the company. Its new fully digitised control system also provides significantly greater computing power and features a touch-screen user interface.
“The Mk 45 is the industry standard for large caliber naval guns, and the Mod 4 updates make the system easier to integrate onto the ship and more adaptable to advanced munitions,” said Joseph Senftle, vice president and general manager of Weapon Systems at BAE Systems.
“As the world leader in developing and manufacturing maritime guns, we are committed to producing reliable and affordable technology that meets needs today and well into the future.”

As the days of the big gun battle ships are way behind us how important are naval guns now? What targets are they likely to be used against?

Naval Gunfire support of troops ashore is still a significant mission,t he RN were doing it off the Libyan coast a few years ago. A medium calibre gun is also useful for anti-piracy and constabulary missions. A shot across the bow is a lot better for these tasks than firing a missile.
BTW 5″ is medium calibre, there aren’t any large calibre guns left in service.

Its also a fairly low cost way of delivering ordnance and the preference is often to use the gun than a missile if possible as a result.

So the Gun still has its place.

It sounds like the contract is for modifications for existing guns. So scratch made ones would cost more.

The UK isn’t buying new guns. There hasn’t been a new Mk45 in decades. All sales are refurbished guns from storage.

Peter, advanced munitions are likely to increase the importance of naval guns in a future combat scenario. It is much easier to intercept and destroy (or decoy) a missile than a projectile fired from a gun, so if their effective firing range is increased as advanced munitions will allow, they could be extremely potent. They are also useful against less advanced threats like gunboat swarms. They can engage enemy gunboats at much greater ranges than a ship’s miniguns and GPMGs, thus decreasing the likelihood of a rogue bullet fired from the gunboat striking the ship, and causing damage. I hope… Read more »

Exactly. The more recent offerings from OTO Melara, BAE, and Raytheon can reach up to 100km if they use the guided munitions now available. Another advantage is a high rate of fire and since a Arleigh Burke carries so many rounds on a standard deployment it cant saturate the target.

No, it’s an order of magnitude easier to intercept a shell.

I have never read about a missile intercepting and deflecting a shell. Even if they could, it wouldn’t take long to win a battle of attrition shells

Then read some more.

If you are in range to shoot your guns, you will be quickly sunk.

Artillery and Naval Artillery shells move extraordinarily fast and fire in the case of the Mk.45 20rds per minute. Then you have to add in they are a MUCH smaller target due to not having a missile body. Another side effect of not having a missile attached is there isn’t a thermal bloom to track. A extended range guided shell has a small rocket motor but by the time it is in the terminal phase it is gliding using the attached fins. So the only way to stop it would be A. Kill the ship directing it and hope they… Read more »

If you are in range to shoot your guns, you will be quickly sunk.

It did indeed. Thank you and everyone else for the helpful replies :-).

One of the key finds from the Falkland campaign was that escorts without a naval gun (Batch 1 T22s) had no way of providing artillery support to the landing forces. They would also be useful against things like modern pirate boats where the use of missiles is unnecessary, expensive and frankly excessive.

Missiles are very expensive. Difficult to reload in theatre and are in many cases over kill

It’d be interesting to know the cost per shell, for the different types.

About $65k – $75k per shell. The only ones that are costed out currently are the Excalibur N5 but that is because they are already a Army program of record so have been audited.
Compare to say Harpoon $1.2 million so much better for shooting at small boats.

Just on that note, I remember having to justify Brimstone 2 to some basically anti-war people on the grounds it has a limited payload, is very accurate and can be aborted. I didn’t dare mention it was relatively cheap 🙂

It is theoretically feasible to intercept a incoming shell using CIWS. The system will track the ballistic path of the shell and provide good resolution of the target as its using a high frequency pulse doppler radar. The radar can be used to place the rounds in the path of the target, even if its one of the new type of shells that can do limited manoeuvres. The problem would be is there enough mass in the 20mm tungsten rounds to deflect or destroy the incoming shell. Not sure a CIWS carries enough ready rounds to counter 20 rounds a… Read more »

Not the least bit theoretical. Phoenix was used in Afghanistan to intercept incoming shells.

And, once again, you’ll be detected, targeted and sunk well before you got to shoot off your gun.

I think Sea Wolf did intercept a shell in testing.

Part of the regular Sea Wolf system testing carried out on T22s was to shoot down radar echo shells fired at the ship to land withing the Seawolf engagement envelope. You could see the shell leaving the barrel of the firing unit on the 997 surveillance radar( Lots of Doppler) The tracker would lock up the shell and follow it in till it splashed. If you played back the video in slowmo you could actually see the black dot of the shell on the TV screen as it hit the water. When all was good on the tracking runs you… Read more »

Encouraging report. I trust its successor Sea Ceptor is as good or better.

The long range and availability of guided munitions allow the 5″ gun to take on an ersatz air support roll. That’s why it needs to be the standard gun across T26,31,45 classes. The T31 in particular is highly likely to end up deep in the littoral danger zone, 10 miles off the coast, providing fire support for troops in contact many miles inland. This is also why the T31 needs to at least equal the Anti air systems of the T23 and the full Anti surface potential of the Sea Ceptor needs to be realised. I don’t think you would… Read more »

The ability to kill targets miles inland with precision.

Such a system provides a fantastic force multiplier effect, especially when used in conjunction with Special Forces and UAV targeting.

I know it is too late, but if we went Otto Melara for the fleet with the 76mm on our T31 and 127mm on the T26/45 is this not a more standardised approach that may actually be cost effective. The Otto’s have a lot of automation under the deck and have automated magazine that have 350 shells in, I believe the MK45 we are getting are no where near this. I also no Gunbusters isn’t a big fan of the Otto, but maybe theres a deal to be done and I think the 76 is probably ok for the T31… Read more »

No it wouldn’t. Commonality with the USN with the Mk 45 gun gets you cheap as chips service, support & ammo.

Yep, use the exact system the US Navy use.

understood, but there are lots of customers using the OTTO system as well.

It does seem to be a really good automated modern system and with 400 rounds in the autoloader that is some capability.

Does anyone know what the configuration of the MOD 4 is for the T26 as some of the USN vessels have magazines approaching 680 rounds, but I am not sure how automated these are.

Lastly, they also have the Vulcano ammunition which is a bit of a game changer.