The award also covers support and one-time, upfront engineering costs. Already under construction at the Boeing F-15 production facility in St. Louis, the first two jets will be delivered next year.

The U.S. Air Force is also announcing the overall Indefinite Delivery Indefinite Quantity contract with a ceiling value of nearly $23 billion for F-15EX.

“The F-15EX is the most advanced version of the F-15 ever built, due in large part to its digital backbone,” said Lori Schneider, Boeing F-15EX programme manager.

The most significant difference between the F-15EX and legacy F-15s lies in its Open Mission Systems (OMS) architecture say the U.S. Air Force. The OMS architecture will enable the “rapid insertion of the latest aircraft technologies”. The F-15EX will also have fly-by-wire flight controls, a new electronic warfare system, advanced cockpit systems, and the latest mission systems and software capabilities available for legacy F-15s.

Pilots and mechanics currently operating the F-15 anticipate transitioning to the F-15EX in a matter of days as opposed to years. Future plans call for as many as 144 aircraft, say Boeing. 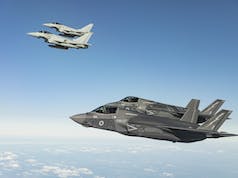 After the USAF initially rejected the idea of a modern F15, they really didn’t have a choice. Faced with the enormous costs of restarting the F22 production line, the F15X was literally their best option. Especially as LM would have had to set up a plant as their current one is pushing out F35s. There was also a big push to replace the F15s with F35s but the Senate and lot within the Air Force put a stop to this. Realistically the F35 is not an air dominance fighter. For the USAF this problem has been snowballing and shouldn’t have… Read more »

Perhaps we should learn a lesson from this and keep iterating on the Typhoon, not least for combat mass. So perhaps a small amount of Tempests backed by a mass of less advanced Typhoons.

I always liked the F15 Silent Eagle. Makes me wonder how feasible it would be to produce a Silent Typhoon.

I know it wouldn’t happen due to budget and focus on F35 and Tempest, but I wonder if it could be done.

Yes, it could be done, but would require some heavy modifications to parts of the structure and probably be exorbitantly expensive. The F15SE was designed to counter X-band radar only. This simplifies how and what you can do to lower the aircraft’s radar cross section (RCS). The Typhoon already has several features to lower its RCS from the frontal aspect compared to something like an F18. Such as the flight control software aligning the canards and flight controls to a radar, swept back leading edges and RAM in the engine inlets along with serpentine inlet ducts to shield the two… Read more »

The main reasons they shut down the F22 line was the staggering unit cost and how rapidly the stealth coating degrades (20-30 hours reportedly, as well as requiring the climate controlled hangers and specialist ground staff to maintain which is a hindrance for a frontline fighter). Both good justifications

They are good justifications, however, now look at the cost and capabilities gap with an almost aged out F15C force needing emergency measures to fill in the air superiority shortfall for what? About 11 more years till the ADF starts coming on line? I stand by my assertion that it was a very bad decision…

That’s not why the F-22 was shut down. The F-22 line was shut down by one man, Robert Gates, Secretary of Defense who had it in for the F-22 for a number of years since he thought that since the Cold War was over the US didn’t need anything that expensive. That decision was taken against the advise of the US Air Force which also wanted a new long range bomber against Gate’s wishes. The decision was made not to fight Gates in Congress over the F-22 if he could be convinced to build the next generation bomber. After much… Read more »

That logic falls over because the bomber project wasnt started until 2014, six years after the F22 was cancelled. Also there were calls to cancel it under the Bush Administration with the Comptroller in 2006 saying the Air Force had failed to demonstrate the need for the aircraft.

When the R&D and testing had all been completed the unit cost of F22 would have been cut in half just like it was in F35 with EOS. If the stealth coating became less of a priority I’m sure they could have done something to reduce maintenance costs and be closer to an F35 in stealth performance but with superior range and maneuverability.

The current F15 doesn’t have fly-by-wire?

Correct, the F15X will though.

Absolutely, it makes a lot of sense and other F15 uses have largely paid the r&d bill too!

It’s an excellent aircraft and gives plenty of bang for the US tax payers buck! 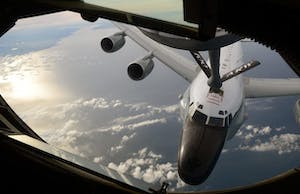 May 10, 2022
An RC-135 Rivet Joint ‘signals intelligence’ surveillance aircraft has been monitoring the Russian fleet in the Black Sea.