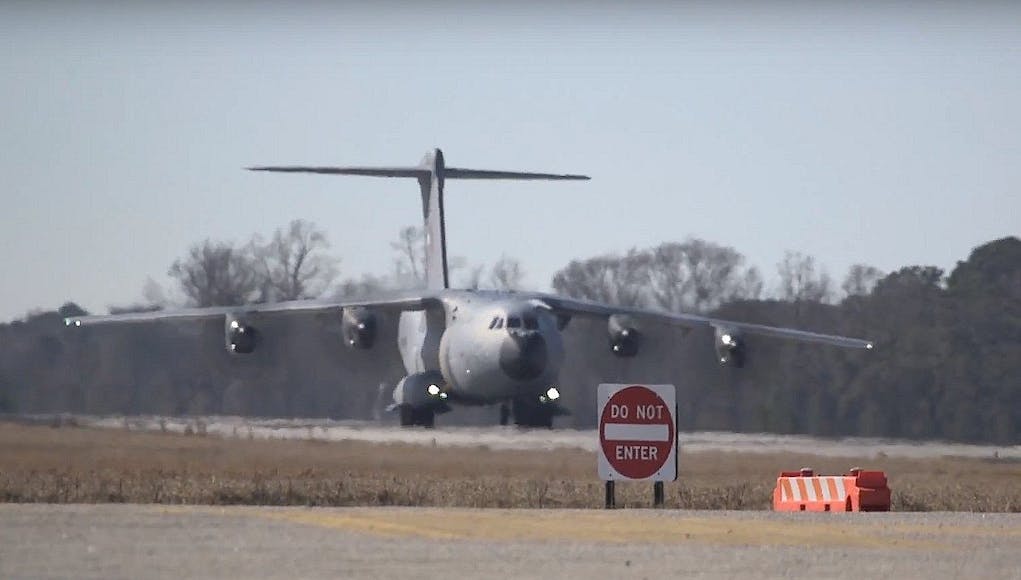 F-35 equipment was loaded onto an A400M Atlas this week in preparation for the first F-35 squadron to stand up in the United Kingdom later in 2018.

In 2013, it was announced that 617 Squadron would become the first operational RAF unit to receive the F-35. Currently, the squadron is in the process of forming ahead of standing up in later this year as the first British front-line squadron with the.

617 will be composed of both RAF and Royal Navy personnel, operating both from RAF Marham, and from the Royal Navy’s new Queen Elizabeth class aircraft carriers. It will fly alongside the Fleet Air Arm’s 809 NAS.

The 14th F-35 for the United Kingdom was recently delivered by Lockheed Martin.

It is expected that all aircraft will have been delivered by the 2030s. Around 2023, the Ministry of Defence have indicated that the UK will have 42 aircraft with 24 available as ‘front-line fighters’ and the remaining 18 will be used for training (at least 5 on the OCU), be in reserve or in maintenance.

It’s a painfully slow build up, I’d be interested in the delivery flow of other F35 customers to compare with the UK’s schedule?

I’m pretty sure that we currently have more F-35 delivered than any other country except the USA. It just looks slow from over here in the UK because all our planes are still in the USA where the UK pilots, engineers and ground crew have easier access to a wider range of deep technical expertise and are surrounded by more people also working up F-35 (the Americans) to compare notes with than if they were doing this work in the UK so we are not only ahead in numbers, we are very probably getting more thoroughly trained pilots and ground… Read more »

Yup. Like for example, our pilots were embedded on the USS Wasp and another aircraft carrier taking part in F35 trials. Therefore we dont have to do alot of the basic tests during our own carrier trials because we already have the data, we basically skip to the end. Same thing with the reason we are permanently leaving 3 F35s in the US, so we can use them as test beds for future updates, as well as to partly pay back our debt to the US for letting us fly their F35s.

Atlas is earning its corn now. The UK has a considerable heavy lift capability. Which is why we are bailing out the French in Mali.
https://www.gov.uk/government/news/huge-new-atlas-aircraft-hangar-opened-by-defence-minister

I’m with Julian on the build up to now. I think it’s been exactly right.

Also, this is a hugely complex ecosystem in which we look to be doing everything right which deserves great credit.

Where I diverge is that it doesn’t really ramp up when it needs to.

I would like to see the initial force being 72 instead with 48 front line fighters instead of being the total. As currently planned we can’t even surge a single carrier to 36 without leaving the cupboard at home bare.

Thanks, Julian. Good to know we are so advanced.

Yeah, also the UK did not want to order everything at the start when the price was sky high. Now that the economies of scale have kicked in they will be able to place larger orders as the Tornado is being phased out.
I have a feeling there will be a lot of joint operation in the next 5 years with part of the air crew on QE being made up of US personnel until all the new RN crew has built up enough experience with the F35 and carrier operations again.

Part of the reason for slow aquisition is also retroffits to early airframes. We will have only a handfull of early planes needing heavy upgrading.

Although this makes sobering reading and I hope our delay in ordering proves to be an even cannier move than we realised and not just on price:

By the end of this year the UK will have the most (apart from the UK of course).

Its interesting how the USMC can order 440 of these with an audited budget 1/3 of the UK’s defence budget. Surely we can order 12 of these per year indefinitely (including its replacement), with the aim of having a combat fighter force of around 256 operational aircraft or 16 Squadrons with 128 assigned to the carriers. cost is circa £1.5bn p.a. which seems OK for such a capability. Eventually the F35 can replace all Tornado and Typhoon Squadrons (it is actually a replacement for the Harrier lets not forget) and save us a fortune whilst giving us a reasonably sized… Read more »

It is a good job you are not an accountant.

I think you will find that over the lifetime of this aircraft the price will drop to circa £80m each and I have factored this in. £125m per aircraft equates to $175m (FX rate of 1.4) and I am pretty sure none of them cost more than that.

So what is wrong with my figures please?

Sorry – my key point is to have a constant order for combat aircraft every single year – no matter what and this will clearly mean we run 2 types at any point in time, but best to have a dedicated budget and drumbeat. The figures can actually be anything.

The F35A will drop to around £80mm, the F35B will still be around £125mm. I agree we need around 48 to replace the Harrier for the RN, for the Tornado replacement we should be aiming towards 100 if the UK is to maintain any credible capability, flying two planes over Syria for extended periods (to get a headline and save money) is not an honest reflection of a high intensity conflict that most government ministers seem to think it is these days. If Russia was to invade a baltic state I wouldn’t be surprised if the US sat back to… Read more »

I believe all versions are targeted at a sub $100m price so should be within our envelope and my costings above at some point. We really should have a combat force of 250-400 airframes, if we are to retain our status as Europes pre-eminent military power and whilst I accept this won’t happen over night – nor does it have to involve purchasing 40 aircraft a year and creating “big ticket” budgets that scare politicians off. Slow and steady is my mantra – eventually (over next 20-25 years replacing all our current combat aircraft, at which point we start doing… Read more »

The skin flints in the treasury will move the jets from one carrier to the other just like the move the missiles from 1 T45 toanother.

BB85 – Forgive me if I misread you comment there but were you suggesting an F-35A can in any way replace a Tornado in the role in which we deploy that aircraft? And if so why has it taken a huge upgrade of an already very advanced aircraft – the Typhoon- to get to ‘Tornado +’ specification? The main arguments for the F-35 are a) stealth and then b) sensor suites. Its why it has an interanl weapon bay. As soon as you throw on wing pylons you loose stealth, then ferry range and loiter time and an F-35A will… Read more »

It’ll be good when they’re here, put an end to ignorant people talking about dud aircraft carriers with no planes.

Indeed, perhaps they could make sure they fly the F35 fairly low over large parts of England, Wales, Northern Ireland and Scotland, so people can look up and say “Oh look, there’s one of those non-existent planes”.

You could fly 400 F35s and 500 Typhoons and they would still say they don’t exist. Where I was born and brought up in Pontypool we used to see just about every aircraft that NATO had fly over here on exercises. We have a The Folly Tower on one of the hills looking down over Gwent towards the Bristol Channel on most days you could not only watch low flying jets above you but you could also look down on them. I wish we could see that today, we see the odd Merlin,Hercules and now and again a Typhoon or… Read more »

16 twin seat Typhoons to be cut up for spare parts, hope that’s the worst of the cuts.

Also on Janes is the article about Australia creating a defence manufacturing strategy, with a view to boosting exports and creating jobs.

Something we could do here, and not just for defence (incidentally South Korea has a number of strategic projects that they deem critical to their country – how many do we have?????)

Well, I think they are Tranche 1 and trainers.

Dadsarmy – Yes all the RAF twin seaters are Tranche 1 trainers (although BAE have two for weapons testing with the rear pilot monitoring and doing data checks). We really have no further use for them as simulators and later trainer aircraft can put ‘trainees’ into front line combat fighters without the need of two seater versions. Witness new recruits are now put into F-35s. And I wouldn’t call recycling very usable parts as ‘cuts’ as Patrick put it. Its just good management of assets that we no longer need to reduce the costs of keeping our now larger Typhoon… Read more »

That’s a very good point Chris, I would assume however that most of these recovered components are specifically for supporting the Tranche 1 single seaters out to 2035+

A few points: 1. the pound has recently strengthened against the dollar. whilst this may be short term, make sense to me to place orders for lead time items at least when currency exchange is in our favour 2. why are so many keen to replace typhoon with f35? whilst we know t1 will go once sufficient f35s are in service, t2 & t3 with centurion almost complete, AESA radars planned and possibly conformal fuel tanks as well as other developments which may happen, typhoon will be a strong and relevant aircraft for years to come. there will never be… Read more »

Great to see the plan coming together.
Am looking forward to the sea trials photos
of F-35B on QE. Only cloud on the horizon
is the defence budget review recently
postponed to next year; the F-35 order
is an obvious big ticket item to cut.