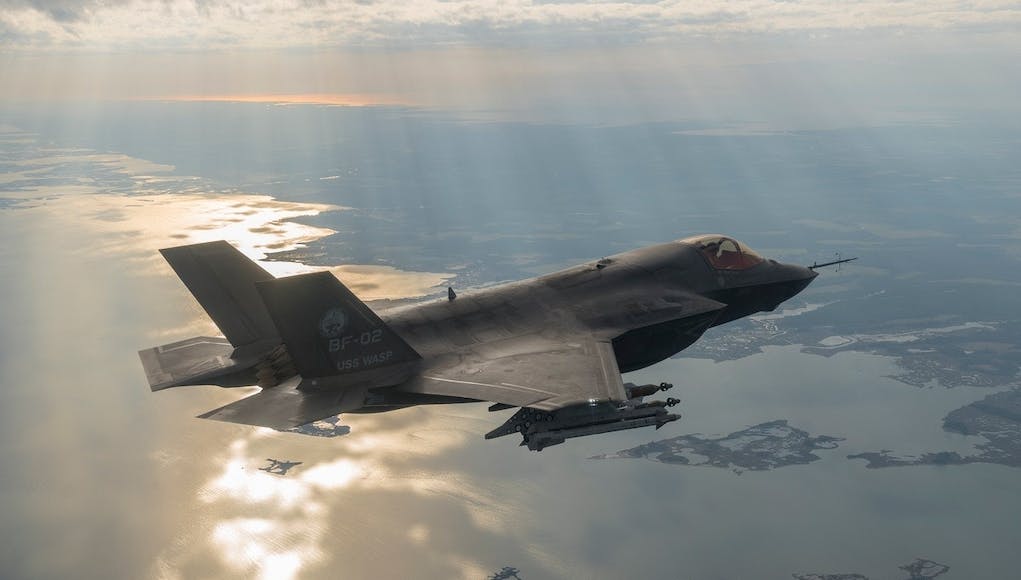 For the first time, Royal Navy and Royal Air Force pilots have teamed up with fellow F-35 pilots from Italy and the Netherlands to take part in the latest interoperability trials that see coalition forces flying F-35s in a simulated mission scenario with other UK military platforms across land, sea and air.

The trial is part of a series of complex simulation exercises that links together facilities from multiple locations across the UK and other F-35 partner nations and creates a common synthetic environment that can evaluate F-35 interoperability with other UK platforms.

The pilots flew the F-35 aircraft from desktop simulators — supplied by Lockheed Martin — at BAE Systems’ site in Samlesbury. Linking into the live scenario from another facility, a Joint Terminal Attack Controller (JTAC) identified nearby ground threats from a hilltop position and requested close air support (CAS) for coalition troops under fire.

This request was coordinated through a simulated Air Support Operations Centre (ASOC), and passed to two Royal Navy Sea King aircrew based at a separate Royal Navy facility who provided command and control directions to the F-35 pilots. As they approached the target area the pilots checked in with the JTAC using the Variable Message Format (VMF) datalink and then proceeded to prosecute their assigned Digitally Aided Close Air Support (DACAS) missions.

“It’s been great to welcome F-35 pilots from other nations to our facilities for the first time. Giving them a taster of the complex missions we can conduct in a synthetic environment and the interoperability challenges they may face has been very useful.

For many, it was their first experience of digitally aided CAS using the F-35’s VMF datalink, and it proved very valuable. It’s a great example of collaboration across the programme and we are already looking forward to welcoming these pilots and those of other F-35 Partner nations back for further trials.”

This latest trial took advantage of recent investments in the simulation facility which enabled the F-35 pilots to experience the helmet mounted displays (HMD) used during flight.

Further improvements at the integration facility include a new mission control room to command the exercise, a mission planning room for aircrew and operations support staff, and a large briefing/observation room where the scenario and missions can be viewed live and operators can link up via video conference to the other trial participants at the various locations to conduct a debrief.

The aim of the overall trials programme is to progressively evaluate the interoperability of UK and Coalition Partners’ F-35s with other military platforms including: Command and Control (C2) platforms; Intelligence, Surveillance and Reconnaissance (ISR) platforms; and Combat assets, with the goal of identifying issues, fixing and re-testing them ahead of Initial Operating Capability (IOC).

Tony Hall added: “We are working with Lockheed Martin and the UK Ministry of Defence towards establishing an IOC interoperability baseline for the UK and F-35 Partner nations and helping them develop a Coalition Concept of Operations (CONOPS) and common tactics, techniques and procedures (TTPs).”

A further trial is scheduled later in the year which will concentrate on the interoperability between the F-35 and Italian naval and airborne platforms and will link simulation facilities from multiple UK and Italian locations.

Can anybody explain to me why billions and billions are spent maximising the F35’s low visibility radar cross section which is immediately nullified to enable it to carry an operationally significant weapons payload. Just adding the pylons eliminates the low vis RCS. It makes no sense to spend billions on a few F35’s when for the same money a mixture of F35’s and enhanced Typhoons would provide more platforms which would actual accomplish a better job. The F35 could be deployed without external weapons to maintain RCS, leading strikes rather than doing the heavy lifting. If further refinements can be… Read more »

The issue with that is the QEs were not built with catapults. In addition no Typhoon carrier variant was developed. So the only option for expeditionary strikes is the F-35B.
The first strike from stealth aircraft is usually very light. Because they are maximizing radar cross section to destroy radar sites. The internal payload and follow on strike are sufficient for that purpose.

Elliott is perfectly correct, and of course not all operations require stealth, so maximising payload e.g. For ground support makes sense. External fuel tanks can also be accommodated, even for long range stealth missions, with the (by then empty) tanks being jettisoned before the detection threshold, thus preserving stealth characteristics.

Sure, John. On “day 1” opposing air defenses will be at maximum strength. F35s will fly in their most stealthy configuration. Once air defenses have been degraded (hopefully by “day 2”), the aircraft will fly with more ordinance but in a less stealthy configuration. Makes sense really, doesn’t it. On the QE2 catapaults issue – The carriers were built to accommodate EMALS (electromagnetic) catapaults. At the critical point for their inclusion in construction, the technology was not reliable enough. It was also being offered at an astronomical price. A price so high that only one ship could have been so… Read more »

Yes EMALS being in it’s infancy was also one of the reasons that the USN dragged their feet building Ford. Even then it was barely ready and the cost of its development buried in the development costs of the class. To keep Congress and the Obama admin from eliminating the program.